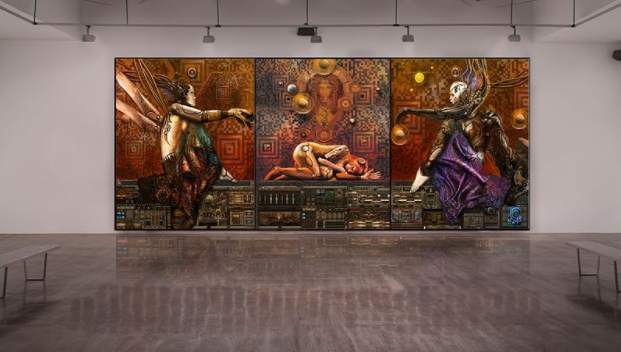 What is perhaps the greatest feature of the internet is its ability to allow artists and writers to publish their work with very little money or effort expended. This is both a blessing and a curse; for every great short story or even full length novel, there are perhaps thousands upon thousands of poorly written stories, parodies, and utterly inane comments. But sifting through the unsifted oftentimes reveals a few nuggets of literary gold (or at the very least, interest) and that is what I am going to write about.

2002 was an early time for the internet. Because it required some interest in computers to really invest a lot of time in it, there was likely a selective sort of group or personality that bothered to use it. Enter Roger Williams, computer programmer and soon-to-be author. His novel “The Metamorphosis of Prime Intellect” details the philosophically horrifying story of an all-powerful (but not malevolent) artificial intelligence that prevents all of mankind from ever dying (even if they really really want to). Prime Intellect, by exploiting a curious feature of quantum mechanics, forces humanity into a simulated universe where it acts as a God. The story sounds old now, but today’s concerns about burgeoning AI development indicate that perhaps Williams was ahead of his time, considering he wrote it in 1994. Published online, the book gained a cult following and soon accrued thousands of views. This might sound unremarkable, but for a previously invisible author it seems to be quite a success.

The other work I would like to touch on is so bizarre and inexplicable that I simply had to include it. I happened upon its name from a single comment on an internet forum, and intrigued, I found a version of the text (with illustrations!) online. Titled “All Tomorrows”, the short piece (which is more like a taxonomy with many lengthy blurbs) details humanity’s future, after an immensely powerful and vengeful alien species (the Qu) irrevocably alters the human race, bioengineering mankind into various monstrous beasts left to evolve on their own after the Qu mysteriously disappears. In what can only be described as detailed body horror, author Nemo Ramjet details how humans, now ranging from semi-sentient lizard herders to wormy abominations, live in their cold and directionless world. Browsing All Tomorrows for a few mere minutes, with its grotesque descriptions and utterly morbid histories, left me feeling like I needed a mental cleansing and a new outlook on life (not that it wasn’t interesting). Even more fascinating, however, is how little exposure these authors get. When a writer physically publishes an incredibly original book, it will absolutely become popular, or at least well known. As for the many unread gems that are still out there? I can only hope that I eventually find them.