Halloween costumes used as a vehicle for activism 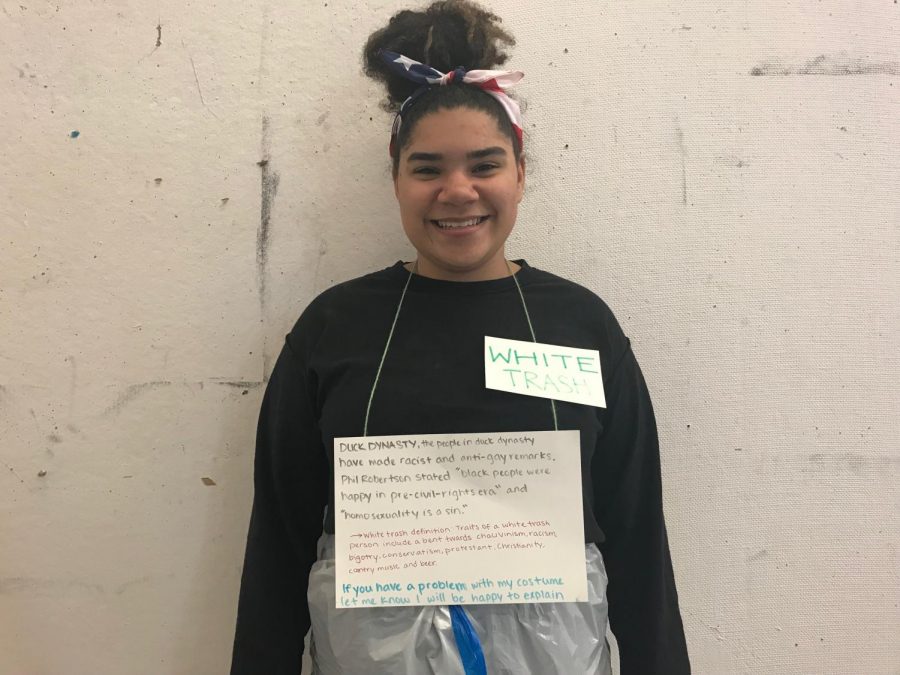 As all Masters students know, Halloween is a tradition at Masters that is celebrated by everyone. Deemed one of the “best days” at Masters by various students, students and faculty come to school dressed under a theme given by the senior class. With the Sophomore theme being Duck Dynasty, some students strayed away from dressing in camo or duck costumes to dressing in white trash bags.

Sophomore Madi Burton was one of the students dressed in a white trash bag. She wore two signs around her neck explaining her costume. One sign read “White Trash” and the part of the second sign read “Duck Dynasty, the people in Duck Dynasty have made racist and anti-gay remarks. Phil Robertson stated ‘black people were happy in pre-civil rights era’ and ‘homosexuality is a sin.’”

Burton explains the reasoning behind her costume, “I wrote here [pointing towards her sign] the traits of a white trash include a bend towards racism, bigotry, conservatism, and other things, but those were the things that stood out to me and were very expressive towards Phil Robertson, one of the people who said some quotes that I found personally very offensive.”

Students had all different types of reactions towards the costume. Most people were surprised, whether or not they approved or disapproved. In the comment section of a picture Burton posted of her costume, other students displayed their admiration of Burton and her costume. Others were not admiring it as much.

“Someone was offended by it and then talked to someone else about it and said they were offended by multiple people wearing white trash as a costume. My response to that person is if you came up to one of us, we’d probably be able to explain our views on it and you may not have the same idea. Before reading my sign, most people were like ‘What are you doing? What are you?’ And I think the explanation and seeing where people are coming from are very very important in a situation like this,” Burton said about how other students responded.

Burton said she can understand why people would be offended, “White trash is technically a slur. It’s a slur for poor white people. I wrote the definition of it in this context here [pointing to her sign].”

“ Other people may just be thinking about ‘It’s fun, it’s Halloween, it’s Duck Dynasty.’ I feel like anyone who is dressed up in this particular costume or in any way protesting against Duck Dynasty, I don’t think any of those people should feel a certain way about people who didn’t,” Burton said about her classmates dressing to the theme.

I admire that Burton used her Halloween costume as an opportunity to use it as a vehicle of activism. It reminds me that activism and its role in any community can take many forms. Additionally, I feel grateful that Masters is a place where students aren’t afraid to push the boundaries of “controversial” topics, and that there are students like Burton that acknowledge the importance of debating and discussing topics like this. To become a community that is more understanding of ideas and beliefs from all members of the community, we must be willing to listen and talk to one another, as well as push the boundaries of different topics such as these.