Isle of Dogs, a two-part post – Part 2: Excerpts from a panel with the creative team 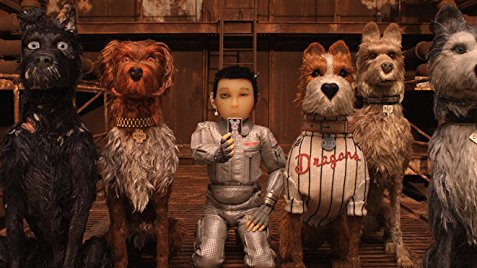 It’s always exciting to watch a movie the day it first screens in theaters.  But it is absolutely awesome when you get to listen to a Q&A panel of the films’ creative talent, especially when it features director Wes Anderson!  The visionary director spoke about his process in filming Isle of Dogs, along with actors Jeff Goldblum, Akira Ito, Courtney B. Vance, and Koyu Rankin, producer Jeremy Dawson, and co-writer Robert Schwartzman.  Below are a few excerpts from the discussion, organized by theme.

The score of any film is as integral to the story as a character, capable of magnifying tension, elevating a hero’s return, lifting the tone of happiness to sweeping orchestral heights and letting it fall to the deepest bass of despair.  If this is true of any director’s repertoire, it is essential to Wes Anderson: who can forget the classical music that highlighted the comedy of Moonrise Kingdom, or how the music of The Darjeeling Limited breathed the sound of India to life?  Longtime collaborator Alexandre Desplat composed the score to Isle of Dogs, which began with a drum piece composed by Kaoru Watanabe and was elaborated from there.

“I always look forward to the part of the movie where we’re really going to do the score.  I try to get Alexandre to get things done years before, but it really comes down to now it’s got to get done.  There’s searching and suddenly there’s inspiration, essentially it’s me and Alexandre in a room together, and I’m suggesting and he’s responding in the way an actor does.  It can be frustrating because we have this feeling where maybe this music can’t be written, maybe it’s just not there,” Anderson said.

The idea for Isle of Dogs was first conceived when Anderson saw a sign for the “Isle of Dogs” in the London animation studio where Fantastic Mr. Fox was being made in 2007.   The “Isle of Dogs” refers to the place where the British king kept his hunting dogs; Anderson was intrigued by the idea, and at the time wanted to make a movie in Japan, so he and scriptwriter Jason Schwartzman collaborated on blending both dogs and Japan.

Isle of Dogs drew its primary artistic inspiration from Japanese cinema, in particular from the work of pinnacle Japanese filmmakers Hayao Miyazaki and Akira Kurosawa.  In addition, Anderson and his creative team were inspired by the woodblock printmakers Hiroshige and Hokusai, the latter of whom is renowned for The Great Wave.

“We were steeping ourselves in their work and sharing it and seeing how it came into our own story.  Originally our idea was a Toho movie made in 1960 but set in 2007. We really liked that idea but we couldn’t quite get it across….” Anderson said.

The movie wasn’t written with an audience in mind, however.  One difference both Schwartzman and Anderson noted was that American audiences usually view animated movies as entertainment for children, while anime movies in Japan appeal to everyone, adults as well as children.

“It’s not really a children’s movie at all.  It might be disturbing to kids or scare them.  When I found out the PG-13 rating, it made sense to me.”

Early on, the creative team wanted a significant amount of the movie to be in Japanese but did not want to make an animated, subtitled movie.  The dogs speak entirely in English, though most of the human characters speak solely in Japanese. Aware that the primary audience would be English-speaking, the writing team first incorporated a narrator to tell the story.  The role of narrator evolved into a character who acted as an interpreter for a news corporation – Interpreter Nelson, voiced by Frances McDormand – to actually translate the spoken Japanese. Tracy Walker, an American exchange student from Cincinnati, Ohio, voiced by Greta Gerwig, was also added.  The additional roles ensured that the film could still be understood, while its tribute to Japanese culture would not be lost through the language. However, some spoken Japanese lines are not translated and are meant to remain secrets to heighten the mystery to the viewers.

The creative team did not think of casting actors until the whole script was written, because each person could have been imagining different or unexpected voices for the various parts.

“We were just running off these characters in the end.  There were real dogs and this was a real story,” Schwartzman remarked.

Once the actors were found, recording began:

“Altogether, we spent 2-3 hours in the studio in LA.  We were all in the same room one day a few years ago. Along the way we added two lines here and there in the studio and recorded new bits on the iPhone,” Jeff Goldblum noted during the panel.  Koyu Rankin, who played Atari Kobayashi, noted he recorded for five hours in New York.

The mic was kept rolling during the whole recording session so the actors could experiment freely, as though it were a rehearsal.   Surprisingly, a majority of the voice-overs in the movies were recorded on an iPhone, which perhaps shows how versatile the and accessible voice acting has become.

“I like the idea of recording on iPhones.  It sounds a little crazy. I always want to say we’re making a student film.  Having people record on their iPhones: it has a bit of a student film feeling.  It’s free – not just financially, I mean,” Anderson joked.

Despite directing the set in London remotely, Anderson still experienced complications regarding set design and animation, especially with regard to puppet and set size.  During the shooting, he kept pushing for smaller-scaled puppets, due to his desire to film shots composed at very wide angles. After a while, the desire to work with such a small set became too challenging to film and to direct from a distance, and a lot of time was lost trying to design a production at a minuscule scale. Because of this miscalculation, Anderson noted that a lot of time was lost and schedules had to be rearranged.