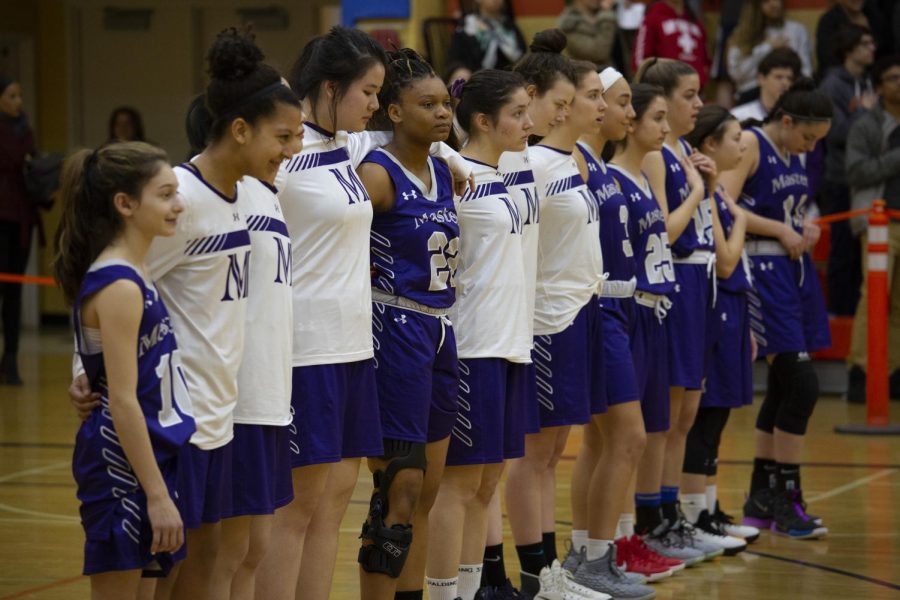 Masters Girls Varsity Basketball stands for the National anthem at the NYSAIS championship. Their success in NYSAIS is a signifier of Masters' future outside of the FAA.

The 2018-2019 school year will be the last for Masters in the FAA, as Athletic Director Kevin Versen confirmed the school would be leaving the league at the conclusion of the spring season. According to Versen, there were many reasons for the school to withdraw their affiliation.

Versen explained that across the board, the NYSAIS offered a “more level playing field” in terms of competition. This was largely due to the fact that in the FAA, other schools use the rule that allows for fifth year students to participate in athletics to their advantage. “Some schools have their athletes repeat a grade just so they can play an extra year,” Versen said.

In addition, the “travel experience is better for everyone,” when traveling to NYSAIS and other local venues. Currently in the FAA, all but three schools (Masters, Rye Country Day School, and School of the Holy Child) are located in Connecticut, and some such as Hopkins School, located in New Haven, Conn., are upwards of one hour away. Playing in the NYSAIS would allow for more local competition compared to that of the FAA and NEPSAC schools.

Though there are just a few fifth year players on Masters athletic rosters currently (across all three seasons), according to Versen, the move to the NYSAIS would mean any fifth year students at the school would not be allowed to compete in the athletic program. Versen explained the benefits of this policy. “This gives us the ability to play locally against Catholic schools and public schools as well,” he said.

Essentially, Masters will have more freedom to schedule games against a wide-variety of opponents and the ability to participate in big meets and tournaments in the greater-Westchester area, for which being a member of the FAA would not allow.

Sophomore Brenna Hazen, who runs cross country and track at Masters, expressed her excitement in regards to these new opportunities. “This will be be a great change for the team, to race against bigger teams at bigger events. It’s going to benefit us and I can’t wait to see how we improve,” she said.

When it comes to the playoffs, Versen explained that all Masters’ teams will be able to participate in NYSAIS championships and potentially in public school state championships.

Sophomore Mariano Russo, a member of the boys’ varsity soccer team, who lost to Hopkins in last year’s FAA championship, explained the downside to no longer competing in the FAA playoffs. “The team was definitely disappointed because we were hoping to play our rivals in upcoming years,” he said.

Nevertheless, another key benefit to the change would be the coverage Masters would receive from local news outlets, including Lohud and News 12. “It gives the school more exposure in Westchester, which is not just good for our school, but also our athletes,” Versen said. Recently, the girls’ varsity basketball team was victorious in the NYSAIS championship and a video recap was posted on the News 12 website later that night.