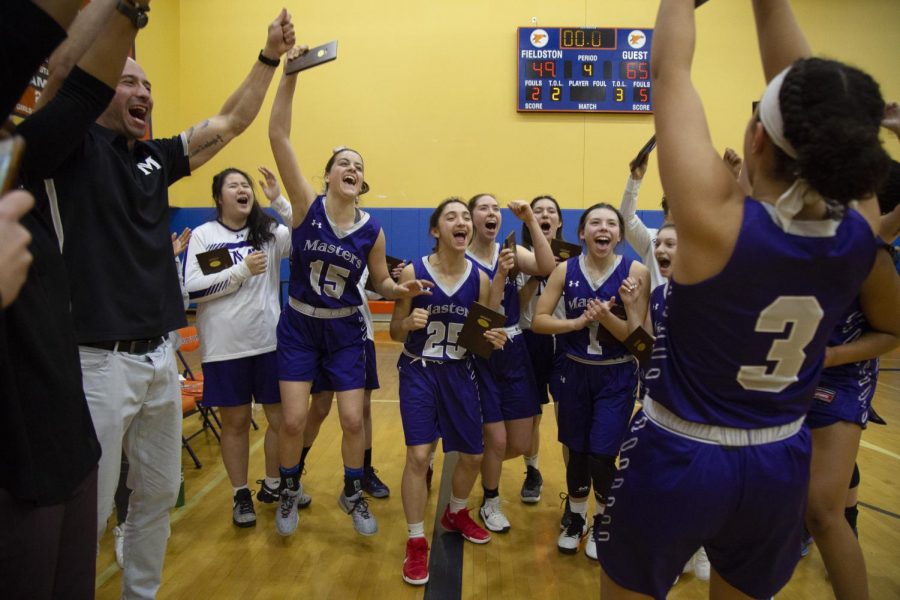 Masters Girls Varsity Basketball celebrates after winning the NYSAIS Championship with a 65-49 victory over Horace Mann.

The girls’ varsity basketball team finished their season in style, capturing the first NYSAIS girls’ basketball championship in school history. The team, which had a regular season record of 14-6, capped off their playoff run by defeating Horace Mann School in the NYSAIS finals on Feb. 25.

Masters was a force in league play within the FAA, going 8-1 and only losing a thriller against St. Luke’s School on Jan. 29. St. Luke’s, who finished atop the FAA standings, went on to win the FAA Championship. Masters, however, took a different route and entered the NYSAIS playoffs as the second seed.

After a bye in the opening round, the girls got their title quest underway against Portledge School on Friday, Feb. 22. The Panthers, the second overall seed in the tournament, dominated on the defensive end by creating turnovers, enroute to a 74-40 blowout victory. Kendra Cooper-Smith led the way recording 24 points and was honored after the game along with fellow seniors Emily Brieant and manager Madison Stewart on Senior Night. Sophomore Brooke Tatarian also pitched in with 23 points, many of which came via the three point shot. Tatarian had been strong all season, scoring 421 total points and earning LoHud Player of the Week honors in December.

The Panthers got right back on the court Saturday afternoon with local rival Hackley School standing in their way of a potential final appearance. The semi-finals matinee saw the team get out to a fast start. Led by junior Noemia Massingue’s aggressive play (11 points in the first-half), Masters was blowing out Hackley at halftime, 42-15. The team did not let-up down the stretch and with a 62-48 win, Masters advanced to the NYSAIS Finals. Tatarian and junior Gwenn Sabato pitched in with 13 points apiece. Others, such as eighth grader Dakota Daniello made an impact as well; she had two baskets on the game, and handled the ball with care, only committing turnover.

With the stakes high, the girls, accompanied by a riled up crowd of Masters students and faculty, made their way into the gym at the Ethical Culture of Fieldston School to contend for the NYSAIS championship against a number-one seeded Horace Mann School team. This was the second year in a row Masters had reached the finals, losing last season to Dalton School.

The Panthers, who were defeated by the Horace Mann Lions earlier this season, got out to a slow start, falling behind 9-2; though they would get it together behind strong play from Tatarian, who propelled the Panthers to a 17-0 run midway through the first quarter. “We went down, but we didn’t let our emotions get to us. We turned it around, got the momentum, and our shooting was on fire. Next thing you know, we looked up at the scoreboard and we were up ten points,” said sophomore Allie Koziarz, the starting point-guard for Masters.

The team never looked back, as the adrenaline of the moment sparked great intensity on both ends of the court. Sabato led the way with 22 points, most of which came in the second half, and Tatarian poured in 17 as well. When the final buzzer sounded, Masters students stormed the court and surrounded the players in celebration of a 65-49 victory and a NYSAIS championship.

Team captain Cooper-Smith, who was appreciative of all the support the team received, explained how the team was able to win the title. “We couldn’t have gotten this far without dedication and lots of hard work,” she said.

The victory was the perfect end to an incredible run, and a fantastic cap to what has been an action-filled winter season. “We finally did it,” Koziarz said.