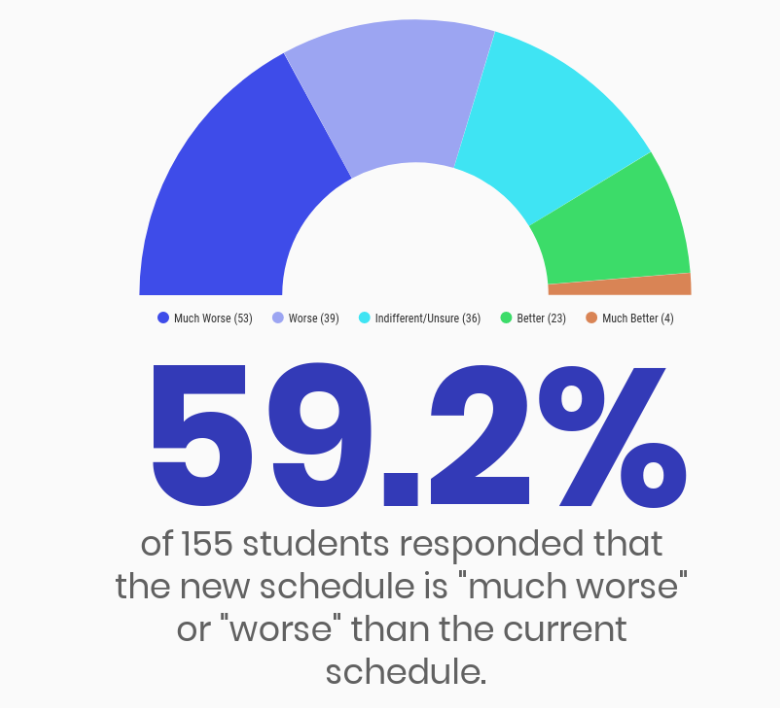 Upper School Eight-Day ScheduleAfter the announcement of the schedule for the 2019-2020 school year, Tower emailed a link to an online survey to the entire student body asking Upper School students to respond with their initial reactions to the new schedule. 155 of the Upper School’s 501 students responded to the survey.

In terms of the composition of the schedule, many students reflected mixed opinions on the new aspects of the schedule, such as “X-Band,” the adjusted class length, the eight day rotation and “Masters Hour.”

Many students noted that they appreciated the implementation of X-Band, the 30-minute non-mandatory block at the beginning of the day devoted to extra help. The majority of 11th and 12th graders who responded to the survey wrote that they liked the incorporation of a later start time. In total, 59 (38 percent) of the 155 respondents noted that they liked the ability to have a late start with the implementation of X-Band.

An 11th grader wrote, “Almost all juniors and seniors will have a first period free at some point in the rotation – which makes a huge difference in the amount of sleep.”

A 9th grader, “I like that we can have 30 more minutes of sleep every day.”

However, only four of the 41 9th graders who participated in the survey explicitly mentioned that they liked the addition of X-Band . One 9th grader wrote that “X-Band” is biased towards borders, day-students who are driven to school and upperclassmen who drive. “Many day students still have to wake up in the morning at the same time to catch the bus and then have the extra half hour to do what?”

Another 9th grade student wrote, “I don’t like the X-Band. They said that the time would be used to sleep and meet with teachers. Firstly, if this time is for sleeping, then school should just start at 8:30 a.m. This is not fair to people who are not boarders or who do not live close to Masters,”

An 11th grade student also expressed frustration that the Middle School has a different schedule than that of the Upper School. “I dislike how school ends later, and it is also inconvenient for anyone with siblings in the Middle School because they start at 8 a.m. and we basically start at 8:30 a.m,” the student wrote.

Many students also felt that 8 a.m. was not the ideal time to have extra help.

An 11th grader wrote, “Why have the time to meet with teachers in the morning? Who’s going to be awake enough to actually engage and understand? Not very many of us.”

Another 11th grade student expressed that the time was limiting. “I dislike that we are being expected to get help in all subjects within 30 minutes,” the student wrote.

Few students responded in favor of the eight-day rotation. The responses that mentioned the rotation in a positive light highlighted the consistency and balance of the new rotation.

Another 9th grader appreciated the move away from a Thursday-centred homework schedule. “I love the effort into preventing the Thursday night homework jam,” wrote the 9th grader. An 11th grade student also mentioned the “Sunday and Thursday night scramble.”

A 12th grade student wrote that “The 8-day cycle ensures that certain classes will not get screwed over by holidays.”

The majority of respondents who mentioned the 8-day rotation included the word “confusing.” Many students feared that they would not be able to remember the schedule or felt as if the rotation was excessive.

A 9th grade student expressed that the schedule disrupted learning at their previous school writing, “I think an 8-day rotation is a really idiotic idea, maybe that’s the unpopular opinion, but I had one before I came to Masters and it was horrible. An 8-day rotation disrupts your entire week and makes it quite hard to keep track of your classes.”

Several students expressed that they feared that the eight-day rotation would also increase the amount of homework. An 11th grade student wrote, “It’s better to have more work on some days and less work on others. I can plan out my schedule. I need those nights where I have nothing due the next day. And if I have more work due on other days, I can finish assignments in advance at the pace I want. They say the new schedule brings better consistency but it’s the complete opposite.”

Students also had mixed responses to the adjusted class length of 80 minutes. Some appreciated the removal of double blocks, expressing that 80 minutes was a happy medium.

One 9th grader wrote, “Class time seems to be perfect.”

However, most students expressed that 80-minute periods are too long for a single period.

An 11th grade student expressed frustration with the length of class related to productivity. “80 minute periods are too long for a single and too short to get as much done as you would in a double,” the student wrote.

A 9th grade student wrote, “The classes are also a lot longer and some teachers don’t give breaks, so the students will become restless or just stop paying attention because they’ll be sitting in the same position for 80 minutes.”

Another 11th grade student wrote, “I cannot focus for half an hour, let alone 80 minutes every day for class periods. Harkness raises my anxiety and makes me lose my mind. I cannot be trapped in a room every single day for such a long time doing it.”

“The 80 minute classes are going to be really hard to get through,“ wrote a 10th grade student.

Many students expressed confusion about the new schedule, questioning how specific parts would work. A 9th grade student expressed frustration with the announcement of the schedule. “They barely and poorly explained in on Friday,” the student wrote. Many respondents questioned pieces of the schedule and wished they had “more information.”

A few students, mostly 12th graders, expressed their fear of changing the Masters culture. A 12th grade student reflected on the schedule. “I dislike everything, it’s taking away what makes Masters so special.”