How One Tweet Ignited a Global Fight over Freedom, Sovereignty, and Justice 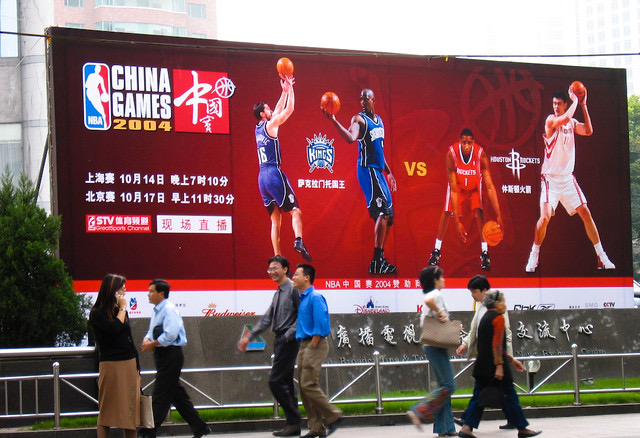 NBA Signage advertises an NBA game featuring the Houston Rockets (and Chinese star Yao Ming) against the Sacramento Kings in 2004.

When Houston Rockets General Manager Daryl Morey sent out a tweet advocating support for protesters in Hong Kong on Oct. 4, it’s unlikely that he could have predicted the reverberations of his actions. Now, in the weeks since the tweet (which has been deleted), its butterfly effect has polarized people across the world, including the 1.4 billion in China.

Morey tweeted a graphic with the slogan, “Fight for Freedom, Stand with Hong Kong.”

For the past few months, residents in Hong Kong have been staging demonstrations against a new extradition bill proposed by the Chinese government–the bill would allow for the Hong Kong residents to be tried in mainland China. Protesters are concerned that the bill would give China greater governmental control over Hong Kong, which is currently autonomous in its financial endeavors. Its foreign policy and defense are already controlled by the People’s Republic of China.

Morey’s support of the Hong Kong protesters frustrated Chinese officials, who felt as though the NBA (via Morey’s tweet) was alienating their right of dominion over Hong Kong.

In an exclusive interview with Tower, former NBA Commissioner David Stern, who served in his position for three decades (1984-2014), said, “I thought it was indelicate of him [Morey] to issue the tweet when he did, but I also believe that that was his right.”

The long-standing relationship between China and the National Basketball Association (NBA) was initiated by then Commissioner Stern, who invited the Chinese National Basketball Team to the U.S. in 1985. Stern hired a coach for their team and they worked out with NBA squads, including the Boston Celtics, Cleveland Cavaliers, and Washington Bullets (now the Washington Wizards).

Stern made his first visit to China in 1988, where he signed a deal with Chinese Central Television (CCTV) to broadcast the NBA in China. Stern explained the motive for his efforts. He said, “By enhancing the relationship between our two parties through sports, we would contribute to opening up a dialogue and opening up the country.” At the time, the relations between the NBA and China were significantly less politically divisive.

The relationship between China and the NBA was magnified when the Houston Rockets drafted 7’6” center Yao Ming in 2002. An eight-time All-Star and the only international player to ever lead the NBA in All-Star votes, Yao’s stardom caused exponential growth of NBA fans in China and became a spark plug for the NBA’s economic success in his country.

Since Yao’s entrance to the NBA, fan populations in China have risen consistently, and as of 2018, a whopping 800 million total viewers–over double the population of the entire U.S.–watched some sort of NBA media in the 2017-2018 season.

The tweet ignited a firestorm, in which major Chinese sponsors of the NBA, including sportswear companies Li-Ning and ANTA, backed out of their lucrative contracts. CCTV not only suspended streaming services in China for the NBA’s entire preseason slate, but shut down streaming of the NBA’s regular season opening night. That set of nationally televised games included a marquee matchup between the Los Angeles Lakers and Los Angeles Clippers, which averaged 3.58 million viewers throughout the broadcast in the U.S.  Last season alone, CCTV’s streaming of the NBA was worth nearly 500 million U.S. dollars.

In addition, the private television company Tencent Holdings, which is a major entertainment and technology player in China, only broadcast one of the two opening night contests. Tencent has averaged 3.7 Million views per stream in its NBA coverage, and had recently signed a five year extension with the NBA.

Current NBA Commissioner Adam Silver has emphasized that he will not apologize for Morey’s tweet and respects Morey’s freedom to express his personal political opinion. In an official statement, the NBA said, “We recognize that the views expressed by Houston Rockets General Manager Daryl Morey have offended so many of our friends and fans in China, which is regrettable. While Daryl has made it clear that his tweet does not represent the Rockets or the NBA, the values of the league support individuals’ educating themselves and sharing their views on matters important to them. We have great respect for the history and culture of China and hope that sports and the NBA can be used as a unifying force to bridge cultural divides and bring people together.”

The NBA is known for being a progressive league, where coaches, players and executives have shared their diverse ideals to the public. Examples of this have included different “heritage nights”, where certain cultures and ethnicities are celebrated throughout the game. The Golden State Warriors, for instance, have already scheduled Filipino, African-American, Irish, Polynesian, and Jewish heritage nights for the 2019 season. In addition, the NBA made history in 2015 when the San Antonio Spurs hired Becky Hammon as a full-time assistant coach, which made her the first full-time female coach of any of the four major professional sports leagues in North America (NBA, NFL, MLB, NHL).

Stern reflected on the NBA’s response to the Morey’s tweet. “I would say that Adam Silver did a great job in standing up for American freedom of expression. We have a different system in the U.S., and if the Chinese are going to react to everything that our players are free to say, and our coaches and executives, then that isn’t going to be a promising blueprint for the future relationship,” he said.

Several Chinese students from The Masters School, a private preparatory school in Dobbs Ferry, NY have chimed in with their views on the controversy as well, taking a differing stance from Stern.

Yingzhi (Allen) Ning, a sophomore boarding student from China and a member of the school’s boys’ varsity basketball team, compared the seriousness of racism in America to that of speaking out against the Chinese government in China. “Western and Eastern values are different,” Ning said. “Racism is the untouchable line in western countries. But in Eastern countries like China, the unity of the country is the untouchable line.”

Another upperclassman male (a boarding student from China), who asked to remain anonymous due to the political implications of the issue, said, “You have to define free speech. I can’t say anything in China. People will come after you if you say the wrong thing. I think it works the same way here. If you say something really racist, or really offensive to a lot of people, you can say it but other people will react to it negatively.”

According to both students, the sensitivity around criticism of the Chinese government is what makes the issue with the NBA so delicate.

The Chinese government criticized the NBA’s support of Morey in a statement which read, “We believe that no comments challenging national sovereignty and social stability fall within the scope of freedom of expression.”

Los Angeles Lakers superstar Lebron James poured even more gas onto the flame when he said, “I don’t want to get into a feud with Daryl Morey, but I believe he wasn’t educated on the situation at hand, and he spoke.”

James’ opinion was received with fiery contempt by many in Hong Kong, where his jersey was burned by protestors who were enraged at James’ stance on the issue.

However, a multitude of American politicians on both sides of the aisle have taken a different interpretation from Stern in terms of the NBA’s statement, harshly denouncing Silver’s treatment of the issue. Many, including Ted Cruz (Sen. R-Texas) argued that the Commissioner was prioritizing monetary potential in China over American principles, such as freedom of expression, and not condemning China’s reaction to the tweet with appropriate gravity. Cruz said, “The NBA should be better than this. We should not be willing instruments of Chinese censorship.”

On Oct. 24, even Vice President Mike Pence weighed in, agreeing with Cruz and his fellow politicians. Pence said that the NBA is “acting like a wholly owned subsidiary of China’s authoritarian regime.

Stern sharply disagreed, countering that the NBA’s response had effectively advocated for free speech, and had not apologized for Morey’s actions whatsoever. “Those particular politicians, Republican and Democrat alike, are idiots. They don’t know how to read. They didn’t know the facts, but they did know the desire to get publicity,” Stern said. He continued, “We [the NBA] are big believers that sports can bring people together. So much for that.”