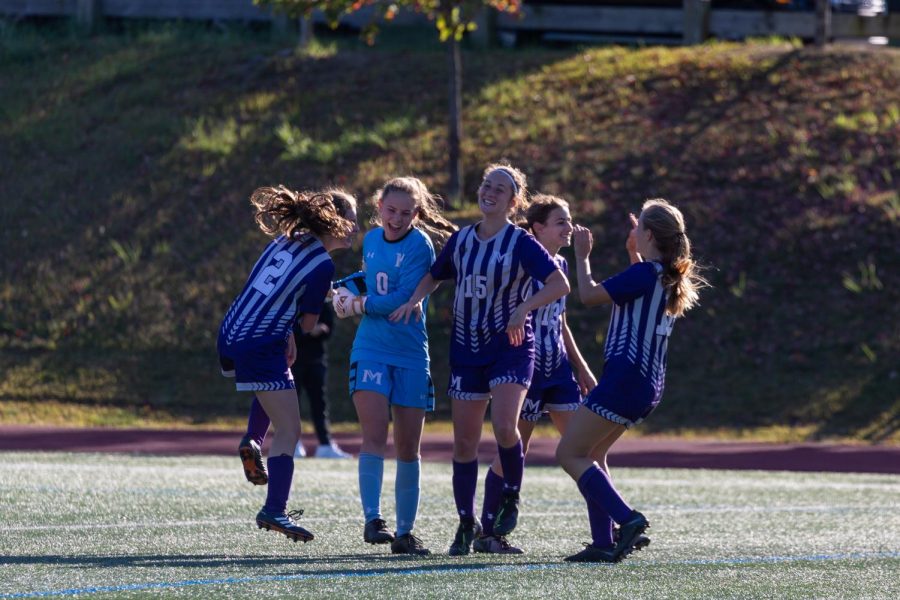 Girls' Varsity Soccer celebrates a 2-1 victory over Convent of the Sacred Heart on Oct. 5. Pictured from left to right are Lauren Marlowe ('23), Francesca Mann ('21), Kwynne Schlossman ('22), Rachel Schwartz ('21) and Tara Phillips ('23). The team has more wins this year than they've had in any season since 2009.

With a new head coach and an influx of underclass talent, the girls’ varsity soccer team got off to a quick start, notching victories early on in the season, and has maintained a winning record to date. The team’s cohesive play was showcased in their recent sweeping victories, including a 5-0 victory over Avenues and a 2-1 win over Nightingale Bamford.

With only five upper class students on the team, the underclassmen play a significant role, as four of the eleven starters are first-year students. According to junior captains Rachel Schwartz and Francesca (Franny) Mann, the first-years are contributing unparalleled speediness and consistency to the game, as well as spirit and tenacity. Among those are attacking midfielder Lauren Marlowe and fellow freshman center midfielders Hannah Florian and Tara Phillips.

This season, the girls welcomed Brendon Barrios as their head coach after Hernando Santimaria, the team’s former coach, moved on from Masters after five years. Barrios is a teacher in the History and Religion Department, who also served as the assistant coach of the boys’ varsity soccer team in the two seasons prior. Barrios said, “They have really been quite responsive to the changes, goals and style that I bring to the team.” Barrios adjusted the warm-ups from static stretching to dynamic warmups, which require more running and movement across the field.

The team also made a mid-season tactical adjustment, implementing  the “three-five-two” strategy, a formation with three defenders, five midfielders and two attacking players. Barrios said, “The idea is to get us a little more attacking-minded.  We are used to giving up a lot of goals and by making the switch [to a new formation], it allows us to put the other team under pressure through the midfield.”

Mann explained how the team’s mindset has shifted. “This year during practice, we’re all staying super intense and focused because we want to win and we know we have the potential. We just need to put in the work,” she said.

The team’s effort throughout the season is clear to Lauren Marlowe, who wears number two. “Our possession has really improved and our spirit has gone up. Whenever we make a mistake, instead of being upset, we just encourage each other and practice those skills more.” Marlowe continued, “Everybody on this team is excited for each other and their accomplishments. There is no one person that pushes ahead. If one person has a success, it’s everybody’s success.”

One year removed from losing 16 games, the team has not only exceeded their win total from last season, but has the best record of the Masters’ girls soccer team in the last decade. The team has not won this many games since 2009.

Barrios said, “I think in years past we were used to losing. We had a drop in the program’s success and now that we have had a bit of a turn, we are starting to win more games. We have become more competitive, so our attitudes and our mindsets have to adjust with that.”

The girls’ recently had a five-game winning streak snapped, with a draw against Greenwich Country Day School on Tuesday, Oct. 22, but will look to start a new one as the season comes to a close. Their next contest is Wednesday, Oct. 30 at School of the Holy Child.