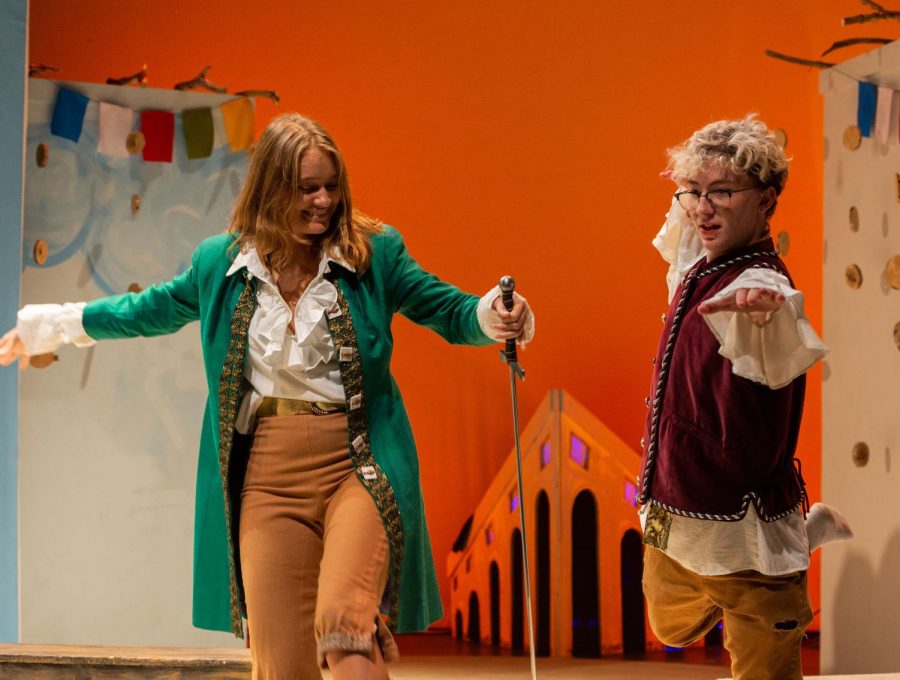 The last time a Shakespeare play was performed at Masters, none of the current Upper School students would’ve been apart of the cast. For the first time since the 2015 performance of A Midsummer Night’s Dream, a Sheakespeare play — Twelfth Night — will again be performed.

After the production of the modern piece Museum last year, the choosing of a Shakespeare classic has gained the attention and excitement of many, especially those in the theater program.

Although it is director Meg O’Connor’s first year at Masters, she has a long history in theater dating back to her childhood. When recalling her early discovery of her love for theater, she describes her first outdoor play experience as “the most magical thing I had ever seen.” A true revelation for O’Connor, she knew immediately what she wanted to pursue when she became an adult.  “I thought, ‘Yeah that is the end of my parents’ stockbroking dreams for me,’” she said.

O’Connor, instrumental in the selection of the play, explained why she chose this particular piece. “Twelfth Night has a lot of good roles. That’s a great thing – to give more opportunities to more people,” she said. As for the selection of a more classical piece instead of a modern play like last year’s Museum, O’Connor pointed out the variety it offered to the community. She said, “We haven’t done anything classical in a while at Masters.”

Her style of directing by incorporating students’ ideas into the characters and the play has increased excitement among cast members especially. That, combined with the selection of a Shakespeare classic, has the performers buzzing.

“I love Shakespeare. He is one of my favorite, if not my favorite, playwright,” sophomore and cast member Lila Patterson said. She continued, “His shows have such lasting power. They were written centuries ago and still feel relevant today.” Patterson also believes that the selection of a classic play is a “nice change of pace for Masters.” Patterson will be playing Maria, the lead servant of Olivia, in the play.

Sophomore Marbod Faure, who plays Orsino in Twelfth Night, also has a key role in the performance. Faure, an experienced actor who worked in a professional theater company in England, was impressed by the level of commitment that the cast members put into this performance. Faure said “I was surprised to find that kind of work level in a high school.” Faure continued, “there is definitely dedication and there’s definitely a will to perform well.”

Not to be overshadowed by the performance of a classic play, the behind-the-scenes work has started to become increasingly more relevant with the play approaching quickly. Junior Samantha New, the stage manager for the fall play, is working hard to make sure everything is ready for performance night.

New, a veteran in the field of stage managing, has held the title for 11 shows, some of which include Museum (the fall play last year), Great Gig in the Sky, as well as numerous spring dance concerts. “I am basically in charge of everyone on stage and backstage,” she said. More specifically, New noted the lights and sound cues, both of which she is in charge of “calling.” She is also an expert in the functions of the play, taking notes during rehearsals. “I can tell you everything – like every movement,” she said.

The finishing touches will soon be added to the play, with the open dress rehearsal coming up on Thursday, Oct. 24, and the final performances on Friday and Saturday of Oct. 25 and 26.

Everyone in the play — the director, cast, and crew — is really looking forward to the play this weekend and hopes a lot of students and faculty will show up in the audience. Marbod Faure puts it simply to the audience members: “you can let go of the rest, watch a play, and have fun.”

It was senior Olivia Knowles, however, who ultimately played Orsino when Faure was unable to perform.

Knowles was already playing Fabian, a supporting character in the play, but she recognized that she was someone who could fill in for Faure’s character as soon as the startling news reached the cast. “I went up to my director and [said] ‘If you need me to step in, I will,’” Knowles said. The final decision for her to play Orsino was made only a few hours before the show began on Friday, Oct. 25.

Knowles said she was very impressed with how the situation was handled by director O’Connor.” “I think she handled the situation with grace. She remained calm, [and] she kept the cast calm,” she said. “Just the fact that she allowed me to be in this part showed just that everything was going to be fine.”

Knowles shared why she decided to volunteer to play Orsino. “I wanted to support [the theater program] as much as it [has] supported me,” she said. “It’s what I needed to do.” According to Knowles, the cast had the option not to go on stage. However, she believed that they had to persevere. “It was our duty – just to let the show go on.”