Read "Dance Company fall performance brings audience to its feet" for a story update after the show! 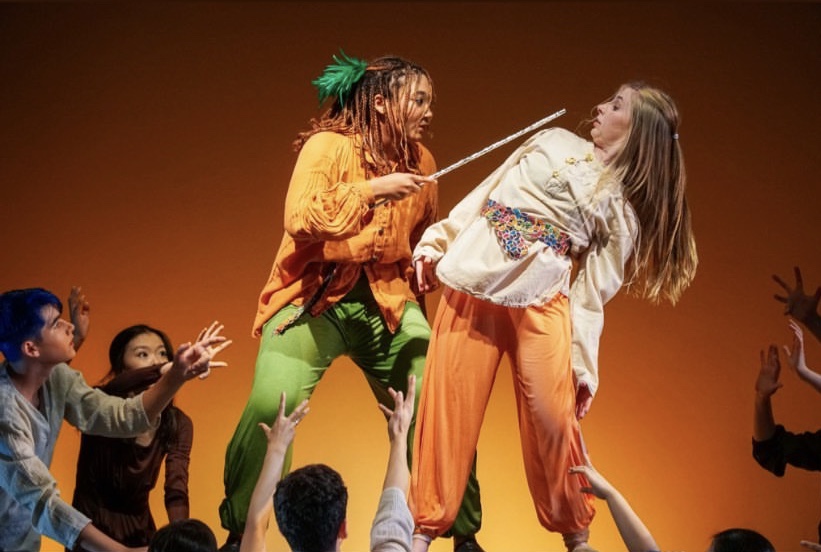 Mali Black '22 and Emily Van Demark '23 take to the stage as rivals surrounded by the rest of the Dance Company during a dress rehearsal. The performance will showcase nine dances covering an array of different genres.

After months of intense preparation, Masters Dance Company is ready for their upcoming shows this Friday and Saturday at 7 p.m.

Dance Company is a performing arts co-curricular that also counts for team sports’ athletic credit, which rehearses and performs once in the fall and once in the spring. The Company holds its auditions the week before the start of the academic year and requires each dancer to take a dance technical class during the school day. They practice for about two hours every weekday, including a rehearsal this past Sunday for three and a half hours.

Sophomore Sameer Tambe who joined Dance Company this year, said that even though the practices were terrifying at first, he is now excited for the shows. “I am excited to dance on a stage for the first time. It’s going to be fun, but I’m also nervous about that too.”

The dancers were able to work with well-known choreographers Akiko Ko-Taiano, Juan Micheal Porter II and Josh Zacher. Ko-Taino has studied dance since she was seven years old and is currently touring nationally and internationally with dance companies. Porter is a dance and theatre writer for Time Out New York and Dance Enthusiast, while Zacher was a part of the Broadway production “Newsies” and will be in “The Elf on the Shelf. A Christmas Musical.”

Upper School Dance Instructor Shell Benjamin chooses the special guests based on the skill level of the dancers in the company and the quality of movement the instructors are able to teach them. Benjamin is also choreographing a piece herself and she enjoys the entire process. “I relish the stage where I dream about what I want to say. This leads me to the daydream period where I play around with thinking outside of the box to create and visualize thoughts.The next component is most meaningful to me because I delve deeper by researching to find greater meanings and truths,” she said.

Freshman Haile Coore is appreciative of the chance she got to work with the choreographers. “It’s a really great opportunity because they are all very experienced. ”

Coore also noted that the opportunity itself was a privilege and she had a lot of fun. “We have to work really hard but the outcome is worth all the rehearsal days. It’s so much fun to see what we’ve done and how we got there.”

Junior Jazmine Hudson, has been a part of Dance Company since her freshman year and this year she is excited to perform “Porta del Tempo”, a contemporary dance choreographed by Porter. “The story behind it, the structure and the way he taught it is amazing. It’s time travel and the key figures are trying to unlock this door…it’s kind of like fantasy. It gives me an Alice in Wonderland vibe.”

According to sophomore Mali Black, practices can be a bit tedious because she is constantly running through the same routines, but the ones closest to the performance are the most enjoyable. “I’m so stressed right now, between all my school work and getting ready for this. But, it’s so rewarding doing your open dress rehearsals or when you do your shows. I love dancing.”

Hudson is appreciative of the people who joined the company this year and the bonds they’ve created.“When you really start meeting everyone, just because you are together for so long every day, you really become a family and there is a common goal in making the show as great as it could be. Everyone is trying to help each other out. It’s a very supportive community. I love everyone in the company.”

Hudson also encourages everyone to come to the show. “It should be a good show, it’s very diverse. It definitely pushed all of us to our limits… it was challenging but we are so proud of it.”