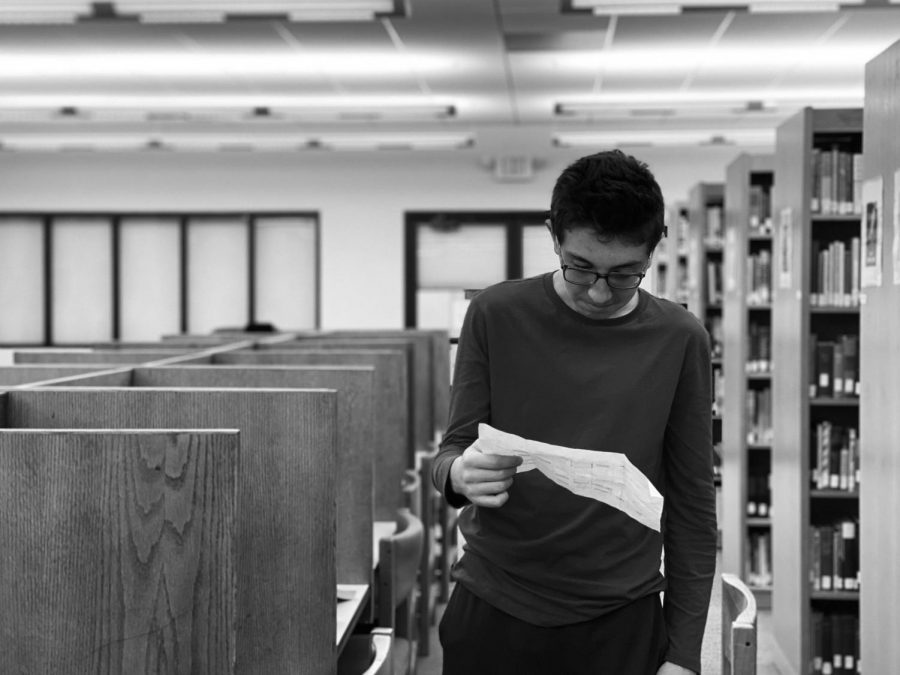 Junior Eric Solomon holds a schedule and tries to make sense of the many blocks in the 8-day rotation. The schedule includes many changes from last year to this year, including no flex lunch, X-band to meet with teachers, an advisory curriculum, a maximum of four classes each day and a later start and end time.

When I first received a copy of the new schedule, I was concerned. No flex lunch, school ending later, the introduction of Masters Hour, and an eight-day rotation were some of the changes I noticed immediately. New goals were outlined by the administration, such as a more consistent class schedule, reduced stress, and increased advisory bonding with the implementation of Masters Hour. And though I was skeptical going into the year, I was told by my classmates and teachers to give it a chance before I formed opinions on the matter–so I did.

However, now two months into the school year, I am back to square one, still trying to understand how the design of this schedule is more effective than the last. The schedule has fallen short of the goals set, yet we as a community are stuck with the repercussions of the introduction of an all-new schedule.

The eight-day schedule was supposed to improve the consistency of class meeting time.  However, I find myself constantly checking my schedule to see which class I have instead of knowing it off the top of my head. The constant rotation adds confusion because there is increased variety instead of consistency. As for the workload, I feel that my homework has increased even though my classes don’t meet as often. In the old schedule, a class would meet three times every week for a total of 220 minutes.  Thus, in a two week rotation, the class would meet six times for a total of 440 minutes. However, with the new schedule’s every-other-day rotation system, (classes only meet five times every two weeks, for a total of five class meetings in 400 minutes during a two week period.) Even though we are meeting less frequently, I have homework for four classes every other night.

As for the implementation of Masters Hour, the original goal was to increase community bonding through increased advisory time as well as the addition of an advisory “curriculum.” Don’t get me wrong, I love my advisory, but meeting three times every eight days is a lot, even though there is an advisory lesson plan. Instead, the time should be used for something more efficient, such as flex lunch, one of the most popular parts of the old schedule.

Speaking of flex lunch, that was one of everyone’s favorite parts of the old schedule. Every week we got a full hour for lunch–which allowed for more club meetings and gave students an opportunity to relax. Flex lunch allowed me to participate in flag football club last year, which was one of my favorite activities during the week. This year, without flex lunch, it is impossible for a club like flag football to exist because there’s not enough time to meet. There are more than 50 active clubs at Masters, but there are only two times during the eight-day rotation for clubs to meet, which makes it hard for students in multiple clubs.

Though I don’t necessarily agree with the decision of creating a new schedule, I do think there are some positives, such as X-Band, which allows for a more efficient and effective way of meeting with teachers.

I believe that the original goals have not been met. There really wasn’t a need for a whole new schedule in the first place. These goals could have been addressed by making changes to the old schedule while keeping the most popular aspects. In other words, “If it ain’t broke, don’t fix it.”