For Mondaire Jones, politics is personal 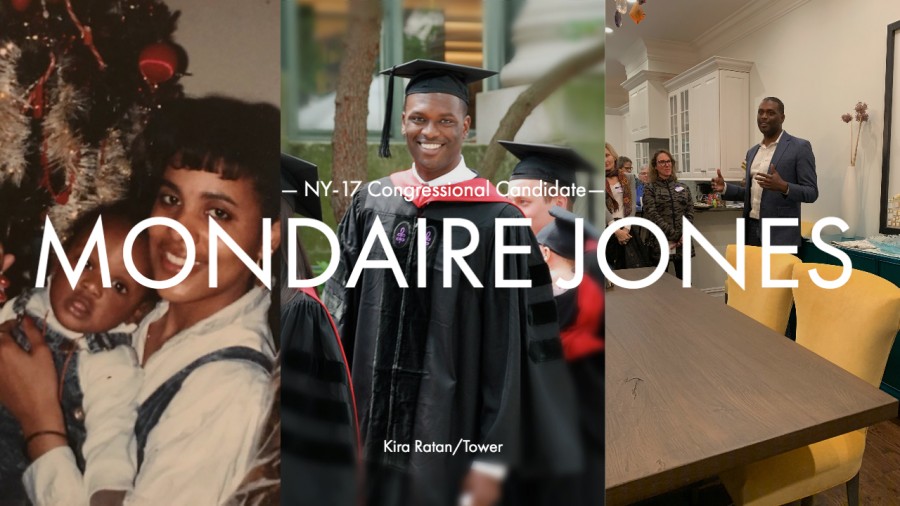 Photos Courtesy of Mondaire for Congress

Mondaire Jones is one of six candidates running for congress in New York's 17th District. Primary elections for this office will be held on June 23, 2020.

Faces of locals lit up when congressional candidate Mondaire Jones walked into the room during a meet-and-greet on Nov. 11. Almost all at once, a line formed and he shook each one of their hands and smiled in succession.

Jones, 32, is one of six Democratic congressional candidates for New York’s 17th District (NY-17: includes Rockland County and Northwestern Westchester County), running to replace Nita Lowey, who is retiring after 30 years in office. If elected, Jones would become the first African American and openly gay member of congress. Jones hopes to refresh his voters with new policies and as a new face replacing Lowey, who also served as the chair of the House Appropriations Committee during her time in office. “I’m excited to give you, the voters, a choice for the first time in 30 years, and I’m excited about this kind of change,” Jones said during a speech at the meet-and-greet.

Jones grew up in a single-parent home in Rockland County. He lived with his mother, who worked multiple jobs and struggled with mental illness, so he spent a fair amount of time with his grandparents, who lived off of low-wages, as well. Jones grew up on food stamps in a low-income family, but according to Jones’ campaign website, in spite of their circumstances, Jones’ mother always encouraged him to dream big.

After graduating from the East Ramapo Public Schools, Jones went on to complete his undergraduate degree at Stanford University, served in the Office of Legal Policy at the Department of Justice under the Obama administration and soon after earned his law degree at Harvard Law School. Fighting for vulnerable communities was most important to Jones, and so he decided to become an attorney. He went on to work at a law firm doing a large amount of pro bono work, helping people with legal issues for no cost, under the Legal Aid Society, a provider of legal aid to people in impoverished communities in America.

Before committing to his campaign full-time, Jones’ most recent job was as a litigator for Westchester County’s Law Department and the founder of the non-profit Rising Leaders Inc., an organization designed to teach leadership skills to children in underprivileged areas.

During Mondaire’s address at the meet-and-greet, he emphasized policies he would push in office including student debt relief, healthcare and childcare for all, a $15 minimum wage, the Green New Deal, several social justice reforms, stricter gun legislation, an Iran Nuclear Deal, and more. “Policy is personal” is Jones’ motto, reflecting his belief that his experiences have shaped him as a candidate and a person as a whole.

Over 40 people from around Westchester County went to hear Jones speak, and many had already been to several of his many meet-and-greets, which are hosted by people in the community, oftentimes at their homes. Jill Fisch, a long-time friend of Jones and supporter of his campaign hosted his event at her home in Tarrytown. Her son, Zachary Fisch, a Masters alumnus (and Tower editor-in-chief), is a good friend of Jones and joined his campaign team when he decided to run for Congress. She explained why she thinks he’d be the best candidate for the job. “When Mondaire announced that he would be running for Congress, I thought it was very brave of him to provide an opportunity to discuss important issues despite risking making himself unpopular. The reason he’s running is that his principles told him it was the right thing to do,” she said.

For others, it was their first time hearing Jones speak. Raju Abraham, executive director of the Affordable Housing Authority in Greenburgh, said he came to listen to how Jones’ experience had impacted the policy which potentially could impact Abraham.“I live in Rockland County, where Jones is originally from, which is nice on its own. But, I also wanted to hear his stance on affordable housing and living, because that’s what would end up affecting me the most,” Abraham said.

Jones remembers when he was a kid living on food stamps and helping his grandmother clean houses. But, he said he had the support and believed in himself, and he has the same message to send to all the kids who may be in the same position he was in. He said, “People like me are going to be fighting for them when we get elected. You just have to tell them to believe in themselves. It all starts with commitment, hard work, and defying the odds to success.”