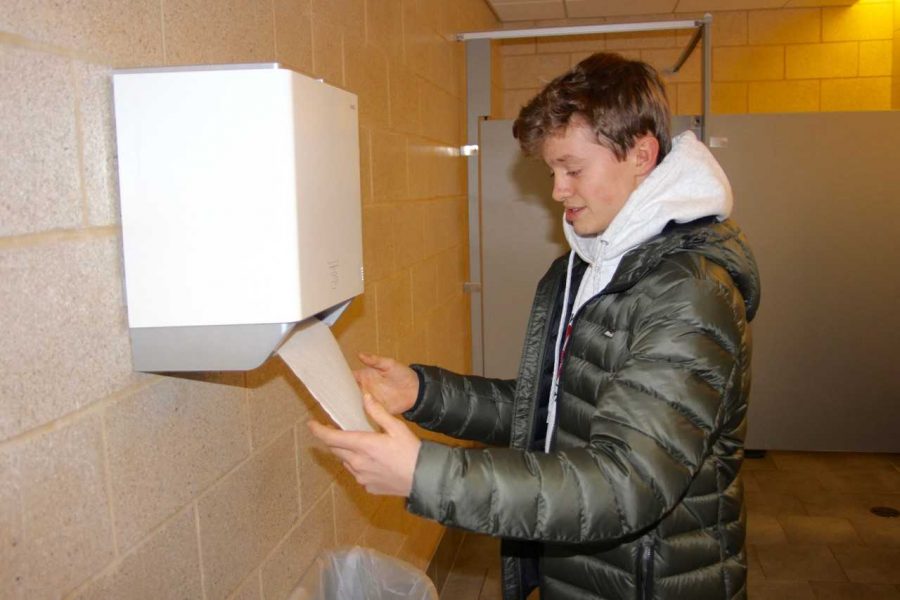 Sophomore Aidan Lothian grabs a paper towel from the automatic dispenser in the bathroom on the third floor of the FC. While the dispensers have a variety of benefits, they still produce a significant amount of waste.

I expected my classes to stress me out by day’s end, but it was one minuscule “improvement” in the bathrooms that really had me scratching my head.

It was the first day back from Thanksgiving break and after a long day of classes I strode up to the third floor of the Fonseca Center (FC) to get ready for indoor track practice. I made a quick pit stop at the restroom and as I washed my hands and turned around, I noticed something unfamiliar posted on the back wall. When I hovered my hands underneath this foreign-looking appliance, a crisp, brown paper towel was dispensed.

The new electronic paper towel dispensers in the FC restrooms are not a sustainable mechanism for hand-drying.

Some would argue that these new devices are more convenient; you used to have to grab a paper towel using your own manpower–what a burden, right? Now, not only do we still have paper towels in our restrooms, but electricity is fueling the operation. In an era where energy conservation is at a premium, these paper towel dispensers are a testament to our excessive dependence on electricity.

Resource extraction is one of the leading drivers of climate change and is greatly contributing to the downfall of Earth’s well-being. 17 trees are cut down and 20,000 gallons of water are consumed to make one ton of paper towels, according to an article entitled “13 Facts about Home Paper Products that May Inspire You to Hug a Tree” published on DrGreene.com. Additionally, fossil fuels burned from trucking or flying materials to manufacturing plants, paper towels to their location of usage, and all the paper waste created to landfills. Two percent of landfills, or three thousand tons of paper waste, are deposited in landfills each year, according to The Guardian. This waste is contributing to the frenzy of methane and carbon dioxide generation that occurs as a result of anaerobic decomposition in landfills.

Masters should consider doing away with these additions and should focus on sustainable improvement. One advantageous upgrade would be to install high-speed air drying machines in the school’s restrooms.

While these do require electricity to operate, they do not produce any physical waste after use, unlike paper towels, of which need to be disposed. Overall, high-speed dryers are more sustainable than paper towels.

Additionally, Dyson, a British company that manufactures appliances including high speed dryers, list the cost and environmental benefits of various hand-drying methods on their website: paper towels require an annual running cost of $1,460, while the Dyson Airblade dB hand dryer has a running cost of $40. Furthermore, paper towel require 17.1g of carbon dioxide per dry while the hand dryer only requires 3.7g. While this could be simply a marketing tactic utilized by Dyson, the effectiveness of high-speed dryers is supported in further research.

A study conducted by students at the Massachusetts Institute of Technology (MIT) was designed to “compare the environmental impacts of a broad range of hand drying systems [including different types of warm-air dryers and paper towels] using a consistent basis and to analyze uncertainty in order to comment on the statistical significance of the differences between the systems.” It analyzed the different drying methods from cradle-to-grave (including materials used, manufacturing, transportation and disposal of the appliances and/or towels used for drying) and noted the environmental impacts of each. The study concluded “with a high degree of confidence that the high-speed dryers have a lower impact than paper towels and cotton roll towels,” and that the global warming potential of paper towels was far greater than that of high-speed dryers.

The current dispensers are supplied by Ecolab, a company that states they’re a global provider of water, hygiene and energy technologies that fosters sustainable growth and safety.

Christian Soto, the head custodian at Masters, explained that his vision for improving Masters’ cleaning supplies and wellness products had an eco-friendly motive. He said that with a manual dispenser in place, people typically pull out three to four sheets of paper towel, but that the new dispensers are coded to dispense a certain amount of paper each time, thus reducing the amount of per capita waste.

Infection control was another priority for Soto. He said, “When people touch the dispensers you’re putting bacteria on there. The new dispensers will limit the amount of people directly touching them.” Soto should be commended for his efforts, especially for trying to keep community members healthy during flu season.

When considering the use of high-speed air dryers, Soto acknowledged that they would significantly reduce costs and beneficial for the environment; however, he said that “when it comes to infection-control, they are the last thing you want to have in a restroom.”

He continued, “You’re circulating the air that’s inside the restroom and it becomes a very dirty place.” Studies have proven that air dryers discharge more bacteria into the air and can lead to more viruses, thus making them unsanitary in comparison to paper towels.

If students properly washed their hands before drying them (which very few currently do), then there would be fewer germs to spread around, which would significantly lessen this concern.

There are many factors involved when it comes to considering the effects of various drying mechanisms and it can be difficult to find the balance between product effectiveness, environmental considerations and infection control. Nevertheless, if Masters is willing to change their products, then the school should be more aware of the environmental implications and make sustainability their top priority.