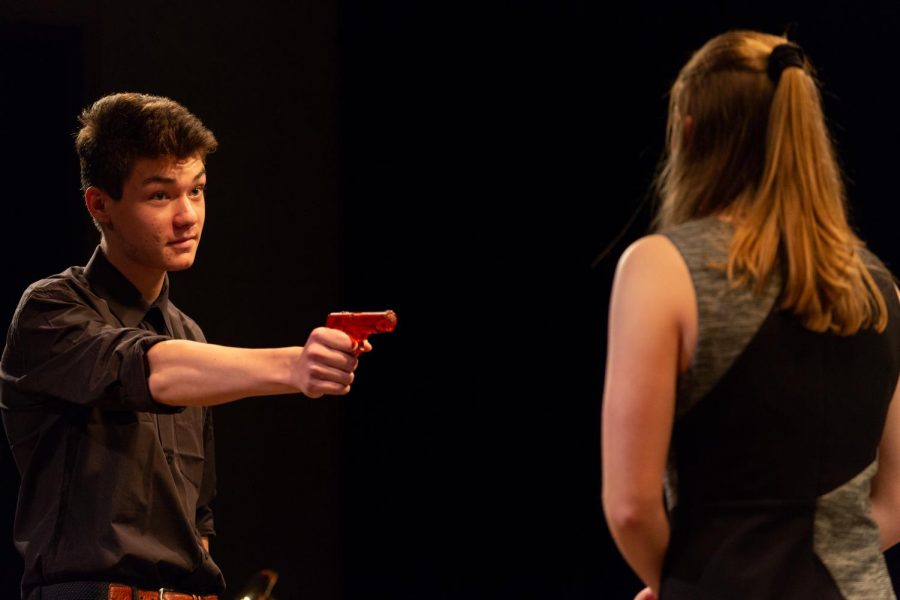 Nine murders took place on “Friday the 13th” in the Experimental Theatre during Phoenix Presents Agatha Christie’s “And Then There Were None.” The 1930s classic whodunnit follows 10 strangers who are gathered on an island, and systematically murdered, one-by-one.

The Phoenix Presents is a Masters tradition produced by Phoenix (the honorary drama society) members. This year the play was run by three seniors: Director Annie Rubinson with support from assistant directors Matteo Pagano and Tim Borowiec.

The cast rehearsed once a week from 6-8 p.m. during November and December. Boroweic said that, despite the short rehearsal time – about 20 hours total (compared to the fall play which has about 100 hours of rehearsal) – “The show was really funny and fun to put together.” He added that detailed interactions between characters showcased the strength of the actors.

In addition to the short rehearsal time, the team dealt with two casting changes early on in the process due to scheduling conflicts.

First-year Lorelei McCarthy, who played Emily Brent, a devout and “mean-spirited” woman, said that although she joined the cast later than her peers, they welcomed her and “helped her find her place.” Boroweic added that McCarthy was the first actor to memorize her lines, despite joining later than everyone else.

McCarthy said, “It’s always really fun to get to bring a mean character to life because it’s so different from how I act in real life.”

“The directors and actors are still learning, so it’s a learning process for everybody. It’s more personal and people are more willing to take risks because you are with people that you’re cool with,” Rivers said. She added that for those who enjoy strategy and problem-solving, the play is particularly fun.

Boroweic said that the show was “killer” and the cast was “dying” for people to see it.

Audience member, senior Chelsea Hall said the direction made the mystery of the show come to life and that it was the best Phoenix Presents to date, in her opinion.

“The set and the usage of behind the curtain was really cool because once someone was offstage, it was a question of where they went and if they were coming back or not,” Hall said.

Senior Owen Pietsch, another audience member, said, “The suspense was amazing. My heart was racing for half of the show.”

McCarthy, for whom this is her second show at Masters, said, “It has energy. When we’re all on stage reacting to the chaos, it’s so much fun.” She added, “It’s a comedic mystery. It has you laughing and on the edge of your seats as people die.