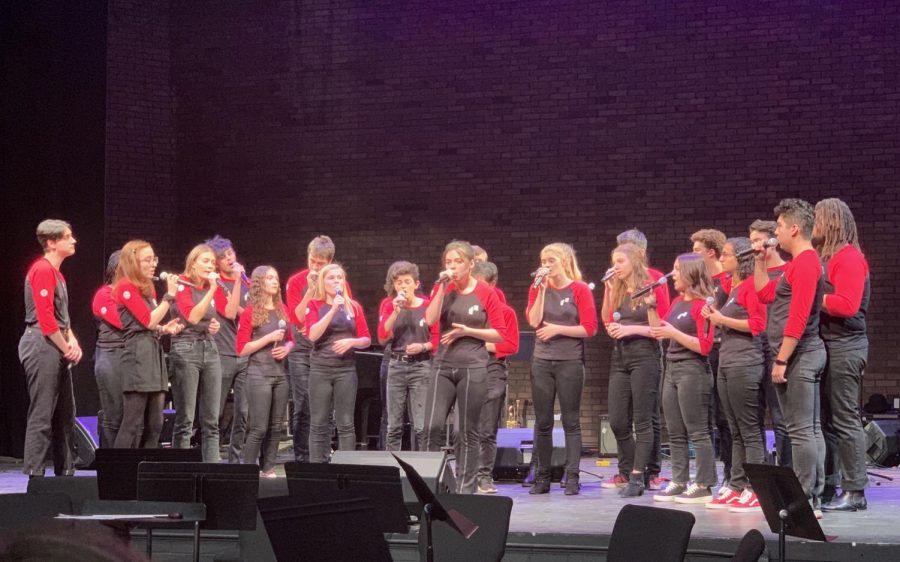 On Sunday, Dec. 15, Upper School students sang and strummed their instruments at the 2019 Winterlight Concert, one of Masters’ longest-running annual performances. The concert was held in the Claudia Boettcher Theater, and featured performances from singing to jazz to orchestra groups.

The concert is a callback to one of Masters’ oldest traditions according to Jennifer Carnevale, chair of the department of performing arts. Dating back to when South Presbyterian Church was a part of Masters’ property, the church would hold an annual Candlelight concert. Masters eventually turned over the land to the church, but continued to hold annual Candlelight concerts. In 2012 the music department changed the name of the concert to Winterlight and altered the format of the concert so that it was more inclusive to all performing groups.

Carnevale notes a few differences between the Winterlight concert and other school concerts. “This concert is the only one that has mixed genres, so what you hear at Winterlight is very wide-ranging; whereas you will only hear one type of music at a jazz or choir-specific concert,” Carnevale said.

Carnevale attributes much of the concert’s continued success to a rigorous rehearsal schedule. “We go through months of preparations, starting at the beginning of the year. Then we have a few days of more intense rehearsals in the week leading up to the show,” Carnevale said. She added, “We like to do “tops and tails” in the days leading up to the show, which means running through the beginning and end of each set, with all the performing groups present.”

Sophomore Michael Couri noted the intense preparations as an audience member. “The show ran very smoothly, and the songs were obviously very well-rehearsed,” he said. He added, “There was a very supportive atmosphere in the theater during the concert, every act received a lot of applause from the students and parents.”

Senior baritone Zachary Barnet enjoyed practicing songs for the concert with the Upper School A Cappella group Dobbs 16. “We’ve been preparing our four songs all year,” Barnet said. “It’s a very close-knit family vibe with Dobbs 16, and our performances tend to be better when the group is closer.”

Barnet believes the Winterlight concert is beneficial to the cohesion of the music department, as it allows ensembles specializing in different types of music to conjoin for one performance. “Winterlight gives the performing groups and classes an opportunity to see what each other are up to, which really makes the whole department come together as one team.”