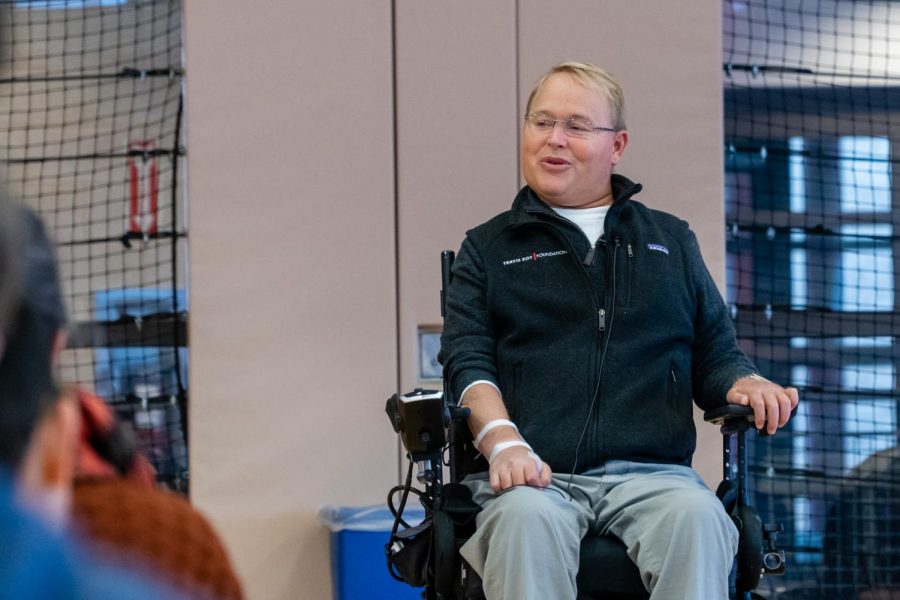 “I woke up that morning thinking it was the best day of my life,” Travis Roy said as he recalled the fateful day of Friday, Oct. 20, 1995, the day he learned he would never be able to play hockey again. Last Monday, Roy was brought in as a guest speaker to share his story with the Masters community. A lifelong hockey player, Roy was ecstatic when he finally got his first opportunity to play for (at the time) the four-time NCAA Division I National Champion Boston University Terriers men’s ice hockey team. Little did Roy know that 11 seconds into his first shift on the ice, his dream of making it to the NHL would be crushed.

Roy grew up in Augusta, Maine, playing a handful of sports like soccer, tennis, golf and lacrosse. However, he said hockey stood out above all, growing into a passion rather than just a game. Offered athletic scholarships by many major college hockey programs such as the University of Michigan, the University of Maine, and Harvard, Roy chose to become a Terrier at Boston University (BU). He suffered a horrific injury during his very first game as he crashed headfirst into the boards, fracturing his fourth and fifth vertebra and leaving him as a paralyzed quadriplegic.

Since the accident, he has founded the Travis Roy Foundation, which helps spinal cord injury survivors as well as fund research for a cure to his condition. He has shared his story with many people, inspiring an innumerable amount along the way.
Roy’s story particularly resonated with Senior August Peterson, a hockey player himself. His former hockey coach, Todd Johnson, was a player at BU between 1978-81, and talked about Roy’s story with his team often.

“Before games, he would talk about our dreams and aspirations and talk about Travis. And [he would] talk about how much he’s [Travis’] been through to get to where he is and how much success he’s able to have in his life, even though he went through such a traumatic experience,” Peterson said. “He would always use that as motivation, you know ‘we’re playing hockey today, tomorrow it may not be guaranteed because something like that could happen to anyone.’”

Peterson was inspired not only by the words from his coach, but he also saw Roy’s story on an E:60 [a newsmagazine] episode. On top of that, Peterson’s mom also saw Roy speak at a conference. After having a conversation with Laura Danforth, head of school, about his story, Peterson decided to reach out to Roy’s agent to see if he could come to Masters.

Interim Head of Upper School Peter Newcomb was instrumental in making sure he could come to Masters as well. Newcomb had learned Roy’s story when he was in high school, after his family moved up to Maine. Like Peterson, Newcomb also saw the E:60 and was impacted tremendously.

“[After seeing the episode] I just remember being absolutely blown away by his mindset, his mentality,” he said.

One of the main points of Roy’s speech was to keep creating new goals, to which Newcomb felt resonated with him.

“I think the idea of setting goals and reassessing when circumstances change is really an important thing for all of us to continue to keep in mind. Having short-term goals and also long-term goals about what your aspirations are [is important],” he said.
Another theme of Roy’s speech was the idea that we all face challenges in our lives, some of which we take on, but some of which take on us.

“That’s the challenge that chose me,” Roy said when speaking about overcoming his injury. “There are times when we choose our challenges, we set our goals, and there are other times where our challenges simply choose us. It’s what we do in the face of those challenges that defines who we are,” he continued.

Roy also stressed the importance of pride. Though his life was derailed by this injury, to Roy it was about having passion no matter what he did.