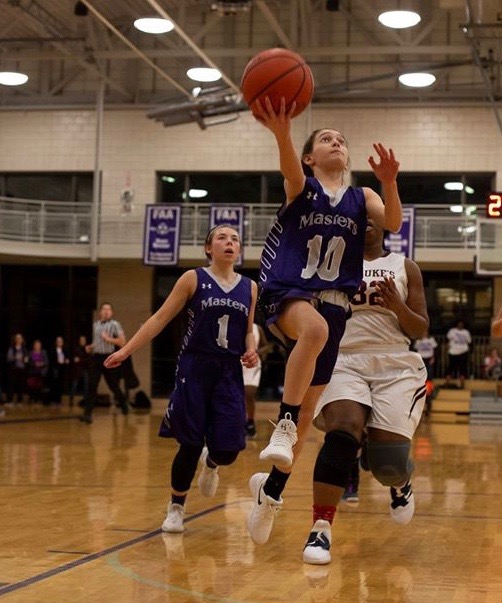 Masters girls’ varsity basketball kicked off the season with their first victory at home against Columbia Preparatory on Dec. 11. The matchup was not only intense, with Masters being down by 22 points in the first half, but also extremely close with the team winning by only seven points, with a final score of 64-57.

Senior co-captain Gwenn Sabato admitted that early on the team struggled with communicating properly. “We were yelling at each other in the beginning, but we reduced our turnovers, we talked to each other, we knew what we needed to do and we came back,” Sabato said. Even though it was a tough start, she believes that the team had many good moments, including looking up, passing the ball, making fast breaks, and continually cheering each other on.

Head Coach Nick Volchok commended the girls on their constant dedication and drive throughout the game. “We were down 22 points in the first quarter. For us to come back and hold them to zero points in the second quarter was a really good sign of us locking in on our defense and playing hard together. I definitely think that our resiliency was the best part of that game.”

The next day the girls were on a bus to Leman Manhattan Prep for another game. However, they did not let this tight schedule stop them from winning yet another match with a score of 63-28. Freshman Ana Castillo described the game as aggressive and even though they won, she believes they could have done better. “Overall we have a really good team dynamic, we are all really skilled. It’s just that we started off the game slow,” Castillo said. According to her, the entire team is always excited to prove themselves with only seven girls, so she is not sure why the beginning of the game is not as strong as the rest.

Volchok has been pushing the girls during practices, ensuring that they work on their shots, plays and stamina. Junior Brooke Tatarian, who has been on the team since freshman year, enjoys the challenge. “I think Coach Nick does a great job with us by practicing game-like situations because the teams we are going to be playing are going to have more people than us, they are going to be stronger, bigger and more athletic,” Tatarian said.

Tatarian is most excited to defend the team’s New York State Association of Independent Schools (NYSAIS) championship and hopefully win again. She said, “We are totally capable of doing it again and we have all the tools and the coaching and the motivation that we need in order to get there.”