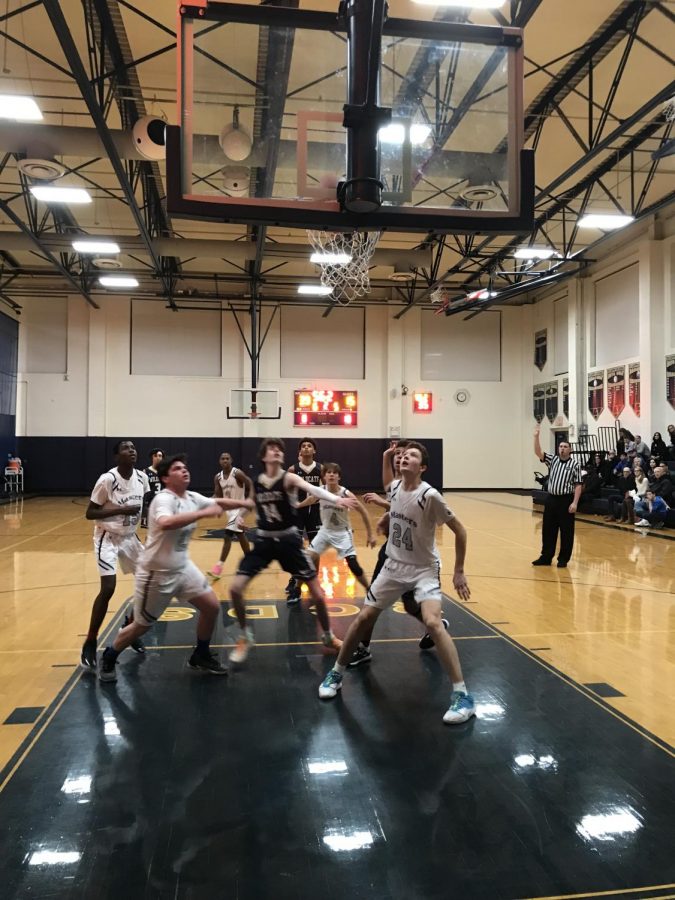 Sophomore Stefan Darmanovic and Junior Justin Small fight for a rebound over a Rye Country Day forward. Masters dropped the game to RCDS 65-39

Masters boys varsity basketball saw their record fall to 2-5 in a 69-35 loss to former FAA rivals Rye Country Day (RCDS) on Friday, Dec. 20, and a 69-60 defeat to Berkeley Carroll School the following day in the John Sabia Holiday Tournament, which was hosted by Rye Country Day.

Masters first faced RCDS in the first round of the tournament. The Panthers got off to a slow start, as the Wildcats began the game on a quick 11-0 run. Before four minutes had elapsed, RCDS took a commanding 19-3 advantage, thanks to a series of three-pointers and a suffocating full-court press defense.

The Wildcats never looked back, taking a 40-18 lead into halftime, and ultimately emerging victorious by a score of 69-35 in front of a raucous home crowd.

Junior forward Richie Boxer said, “We did well with handling our composure in a crazy atmosphere, but I would have liked to see us play more as a team.”

Junior Tim Mathas and Freshman Stephon Marbury led the way for Masters, notching eight points apiece, and combining for nearly half of the Panthers point total. Masters was clearly outsized by the Wildcats, which allowed 6’1” RCDS point guard Ben Pearce to often drive into the paint for an easy lay-in, or kick it out to an open shooter on the wing for a wide open three-pointer. Pearce led RCDS with 23 points.

The Panthers then faced off against Berkeley Carroll Lions in the tournament’s consolation game, looking to bounce back from their defeat against RCDS. Improvements from the RCDS game were evident, especially on the defensive end.

According to Boxer, a shift in defensive strategy was a key to the newfound success. Against RCDS, Masters used a 3-2 zone, as the Panthers were wary of RCDS’ strong three point shooting.The strategy entails three players guarding closer to the three point line, with just two protecting inside. However, that didn’t stop the Wildcats from still finding open looks from deep, and the lack of protection near the basket allowed RCDS to score easily down low.

Coach Keydron Clark and the Panthers switched to a 2-1-2 zone for the Berkeley Carroll game, adding more reinforcement in the paint and leading to an improved defensive effort. Boxer said, “The 2-1-2 worked way better. We kept pressing and gaining momentum.” He added, “It allowed us to go on streaks where we would score and then press defensively. You could feel the energy in the building.”

The offensive efforts were led by Senior guard Mike Van Demark who had 17 points and Mathas who contributed 15 points. The Panthers kept things close throughout, but ultimately fell to the Lions 69-60.

However, Boxer still has belief that the Panthers will bounce back. “When our intensity and effort are high, the results will follow.”

Masters will look to get back on track after the break when they face off against Leman Manhattan Prep on Jan. 8.