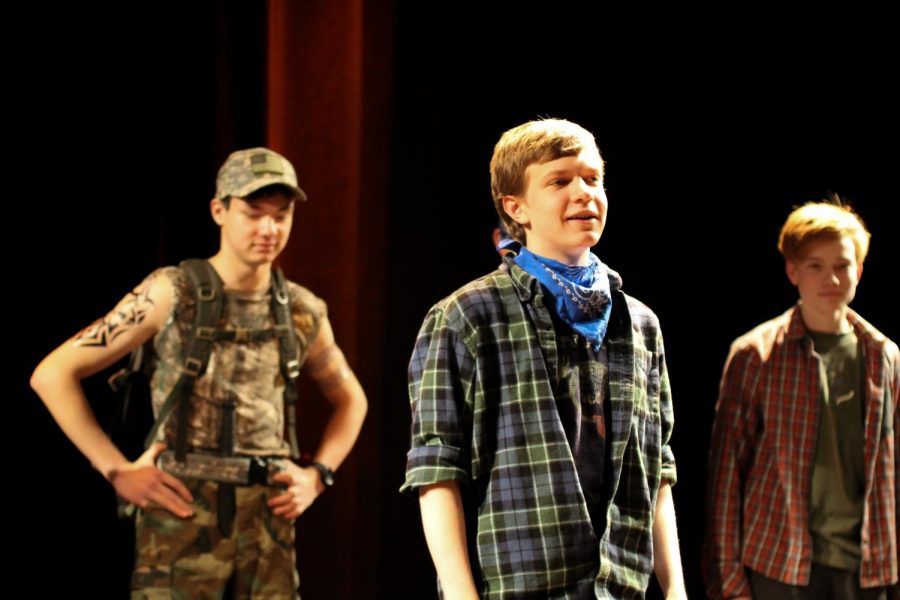 Senior Owen Pietsch (middle) sings "Blow Away the Morning Dew" in The Salting Dead. Pietsch is the oldest member of Salty Dogs, currently in his fourth year.

One evening in the winter of 2017, Theodore Horowitz ’19 sprinted down the main quad to print fliers for the first ever Salty Dogs musical because he “thought it would be funny.” Last week, he returned from college to participate in The Salting Dead, the group’s fourth original musical production.

The Salting Dead premiered on Thursday, Dec. 19, in the Experimental Theater. The musical was created and directed by seniors and Salty Dogs co-presidents Tim Borowiec and Gabriel Keller as a parody of AMC’s The Walking Dead. It featured an original plot written around a set of sea shanties–or songs of the sea–from traditional numbers like “Old Maui” to an original shanty by senior Sophie Lai. In the play, a salt water overdose epidemic transforms humans into zombies by the masses, and the Salty Dogs set off in search of the cure.

Founded in 2016, Salty Dogs was formed to create an open environment for performers of all grade and skill levels. Former co-president Ian Accetta ‘19 described the group as “a great way for people to dip their toes into performance art.”

Borowiec said he especially appreciates the camaraderie he found in the Salty Dogs.

“It’s an outlet for this manic energy that everyone has,” he said. “A lot of times there’s not really a place to put it, but Salty Dogs is a crazy group so it’s a really good place to let loose.”

“I don’t like singing, but I like Salty Dogs,” he said before the show. “I’m not even worried that the show is in an hour, because we’re just cracking jokes on stage.”

Sam Levin, portraying zombie-in-disguise“Human Horace,” had performed in Upper School Musicals, DoPA Days and academic music concerts, but never with Salty Dogs prior to The Salting Dead. He said he decided to join this year because “it’s pure fun,” and provided him with low-stakes creative outlet in the midst of his stressful senior year.

“What can I say, I love shanties” he said. “Even if we mess up, it’s still enjoyable to watch. Everyone is happy, and that’s what matters most.” Thompson added that his favorite song of the musical is “Old Maui,” on which he sings the solo.

“It’s definitely the most ‘shanty’ song,” he said. “It has a lot of energy and ‘hurrah’ in it. I’m really grateful I get to sing it.”

Thompson is one of the oldest members of the club, currently in his third year. Other long-time members include junior Skyla Case and senior Owen Pietsch, who also joined Salty Dogs in ninth grade.

“I’m really proud of them,” Horowitz said. “It’s great seeing something you worked so hard to build survive and flourish after you’re gone.”

Horowitz also reflected upon the impact of Salty Dogs on his high school experience.

“It [Salty Dogs] gave me a place where I could be myself,” he said. “It’s the type of place where someone will suggest something as a joke and then actually follow through with it. They’re that dedicated to the meme.”

The two former co-presidents expressed a continuing sense of belonging to Salty Dogs, and both made cameos in this year’s show. Accetta, due to the snowstorm that moved opening night from Tuesday to Thursday, even opted to stay in Dobbs Ferry for two extra nights so as not to miss the performance.

“My cameos will be fun, but I’m more excited to see what the gang has come up with,” Accetta said before the show. Since graduating Masters, Accetta has formed his own new sea shanty club, “Shantopia,” at Princeton University.