These smartphones have a trick — they fold! 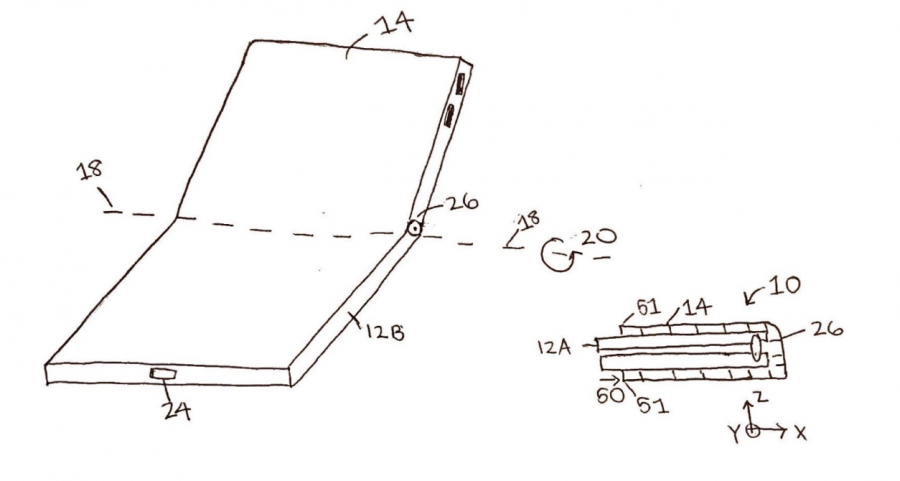 Example Patent of a Folding Phone

Folding phones are the future. No, not flip phones, folding phones — phones that literally fold in half. The year 2019 seemed to spur the “era of folding phones” with the release of the Samsung Galaxy Fold and the Motorola Razr reboot. Although both of these models fold, there are several fundamental differences between each of these smartphones.

Earlier this year, Samsung released its own version of a folding phone. Priced just under $2,000, this is not a smartphone for your average consumer. Their design, however, is innovative and well worth the hefty price tag in my opinion — if you are willing to put aside that much money, that is. Samsung uses a sort of “two for one” design, in that it contains two different screen sizes. The front of the phone contains a 4.6 inch display when closed and a 7.3 inch display while open. Its unique hinge design allows users to choose how they want to optimize their devices’ numerous screens. Closed, the Galaxy fold is compact enough to hold in one hand with a comfortable grip. The main display, when open, allows for enhanced multitasking abilities.

Motorola, just a few months ago, released the Motorola Razr, a phone quite different from the Galaxy Fold. The main difference is due to the fact that the phone folds the opposite way (if you were to fold a piece of paper “hamburger style”, this would describe the design). This unique design is due to the 6.2 inch flexible display. Although this company is less popular amongst smartphone users than Samsung, I believe this innovative design has a lot of potential to change the phone market! Just think about how convenient it would be to have a small phone that could fit any pocket!

Let’s face it — teenagers love technology. The average teen spends a whopping 7 hours and 22 minutes on their phones daily! Several years from now, the growth of folding phones will forever change how teenagers use their smartphones. These new, more advanced, devices may be able to take the place of tablets and even laptops in the near future. Personally, I cannot wait to see just how far this innovation takes us.