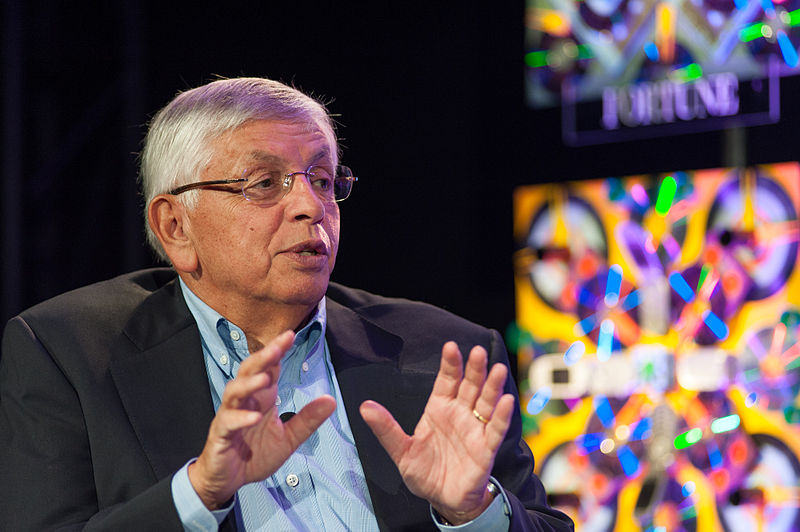 Andrew Ross Sorkin stepped out of his father’s car, legal pad and tape recorder in hand. Sorkin, a 15-year-old student at Scarsdale High School at the time, had scored the biggest coup of his young journalistic life: an interview with National Basketball Association (NBA) Commissioner David Stern.

Sorkin, a stranger to Stern, had sent a letter to the NBA’s Manhattan headquarters, asking for an interview with Stern for a high school sports magazine he founded. Stern, having been commissioner for nearly a decade at that point, had no reason to oblige.

Sorkin didn’t expect a response from Stern. He said, “It felt like I was going to make a big ask. He didn’t know me, so he had no reason to do anything.”

But Sorkin was wrong. Stern, perched atop one of the world’s most lucrative sports leagues, responded to the young reporter, and set up a time for Sorkin to come over to his house for an interview. According to Sorkin, this generosity was anything but an anomaly.

Sorkin, now a financial columnist for The New York Times and a co-anchor of CNBC’s Squawk Box, continued, “I have heard so many stories like this. That’s the thing. There is nothing unique about my story.” He continued, “There are so many young people who he took on at very young ages and supported and believed in, and gave them time. He didn’t have to do any of this. Pure generosity.”

Stern suffered a brain hemorrhage at a restaurant in Manhattan on Thursday, Dec. 12 and was immediately hospitalized. He passed away a few weeks later on Jan. 1, 2020. He was 77.

Serving as commissioner of the NBA from 1984 until 2014, Stern was in charge for 30 years making him the longest-tenured commissioner in the history of major North American sports leagues.

Hailing from Teaneck, NJ, Stern received his B.A. from Rutgers University, and a J.D. from Columbia Law School. A specialist in law, Stern entered the NBA as a member of the league’s general counsel, before rising up the ranks and becoming commissioner.

In 1983, even before Stern was commissioner, he led the way to instituting revenue sharing, where players receive roughly 50 percent of gross revenue. This generated a peaceful relationship between players and owners during his time as Executive Vice President. The policy, which is still in use today, was a massive step in establishing the league with a progressive persona under Stern. By aligning the interests of the players and owners, Stern created an interdependent and stable economic groundwork for the future growth of the league.

He implemented a strict league-wide drug testing program, making it the first drug test enforced in a major sports league in North America. The policy was in response to the widespread use of drugs among players.

Stern took over the commissioning duties from Larry O’Brien in February of 1984.

As commissioner, Stern inherited a league with no shortage of issues. Rampant drug-abuse, dwindling viewership, financial deficits and countless other problems plagued the league as Stern took over.

In a 1980 report by The Los Angeles Times, estimated cocaine use among NBA players was between 40 and 70 percent. The policy encouraged players to come forward with their issues in order to get help but suspended and ultimately banned players who repeatedly struggled with drug abuse.

Stern’s NBA changed sports marketing forever with its player-centric marketing strategy, which focused on the league’s stars instead of its teams.

With a crop of superstars including Michael Jordan, Larry Bird, Magic Johnson and many others, Stern was able to use these athletes’ individual personas to advertise the NBA, which was completely foreign to nearly every other professional sports league at the time.

Sorkin said, “He [Stern] was a brilliant marketer. He understood the power of sport. He understood the power of the individual athlete.” He continued, “He had this very special understanding of how not just teams themselves, but the individual athletes could change culture. And that if the league embraced those athletes, on an individual basis, and could help build those stars, he could onto himself build not just teams but the entire league.”

Howard Beck, a sportswriter for sports media site Bleacher Report, agreed. Beck was a beat writer for the Los Angeles Lakers for many years at the Los Angeles Daily News, where he built a professional relationship with Stern.

“The idea of promoting players as individuals was not just revolutionary for the NBA, but for American sports. It took a long time for the NFL and MLB to see the benefits of doing it that way, or to embrace it and try and emulate it,” Beck said.

Stern did this in many ways. New television ad campaigns for the NBA showcased the skills of NBA stars like Julius “Dr. J” Erving, or Jordan, and through the creation of NBA “All-Star Weekend,” Stern appealed to fans with a series of new skills competitions like the Dunk Contest or Three-Point Contest, which focused more specifically on the individual talents of players.

In addition, Stern looked to augment the footprint of the NBA through domestic and international expansion. First, Stern sought to increase the number of NBA teams, which garnered more fans, and increased viewership significantly. From 1988 to 2002, seven teams were added to the league, including two Canadian teams (the Toronto Raptors and Vancouver [now Memphis] Grizzlies).

However, it was Stern’s global expansion, whether in South America, Asia, Europe, or beyond that, cemented the NBA’s place as the world’s second most popular sport, behind only soccer.

The amalgamation of Stern’s marketing strategies with the global spread of the NBA brought the league across the globe. The New York Times reporter and Basketball Hall of Famer Harvey Araton spoke to the universal impact of embracing stand-out players.

“The rest of the world responded to the individualism of the NBA positively, and perhaps even more positively, because they were seeing something exotically foreign. The response in places like Spain and France, and of course China, was spectacular. In many of these markets, the fans were even more rabid about NBA stars than they were at home,” Araton said.

Throughout Stern’s tenure as commissioner, 18 regular season NBA games and 61 preseason games were held outside of the U.S. or Canada, in nations ranging across four continents. Not to mention the 84 games which were held between NBA squads and Euroleague (the top basketball league in Europe) teams.

Masters School Senior August Peterson, an avid basketball fan,  added, “He [Stern] turned the NBA into a global market as opposed to just in North America.” He continued, “The spread of basketball in a way unified the world. Now we have players from all over the world coming to the U.S. and playing basketball. Before he was commissioner it was really only Americans playing the game, and only a select few from other countries.”

Although the NBA brought together countries in the face of cultural differences, domestic racism still stained the reputation of the league. The NBA received allegations that the league was “too black,” further elucidating the racial politics between black players and white fans.

Araton said, “When he first became commissioner, perhaps, the country was even less conditioned to the emergence of strong, outspoken and leveraged young black males.” He continued, “He [Stern] understood the undercurrent of racial tension in this country.”

Stern allowed for a diverse group of players, coaches and executives. He maintained his focus on filling positions based solely on skill and qualification.

Still, a laundry list of troubling controversies hit the desk of the commissioner throughout his tenure. Courtside brawls, corruption with NBA officiating, and other disputes took a toll on the league’s image.

As a consequence of the 2004 brawl between the Indiana Pacers and the Detroit Pistons, for example, Stern took sharp punitive measures. By suspending nine players for a total of 146 games, Stern set a hard line for what would not be tolerated in the NBA, regardless of the criticism it initially received. According to Araton, Stern stuck to his ultimate responsibilities throughout the numerous crises he faced.

“There was a lot of criticism from the left that he was overreacting and being too punitive in these situations. But I think David understood what his primary responsibilities were,” Araton said.

The creation of the Women’s National Basketball Association (WNBA) in April of 1996, at the hands of Stern, is a prime example of the juxtaposition between Stern’s obligation to engage fans in the game of basketball as best he could and the maintenance of his socially progressive ideologies. The vision for this league stemmed from the idea of giving female athletes a platform to demonstrate their skills, while simultaneously filling the publicity gap during the off-season where the NBA was not spoken of or promoted. Since the NBA’s season ended in the beginning of July, the league generated little to no media attention until the opening of training camps in late September. The WNBA runs from May 24 to October 10, bridging the gap from the NBA Playoffs to the beginning of the next NBA season.

Araton said, “What David understood was that sports can operate at its financial peak by having year-round marketing.”

The WNBA is now easily the most popular professional women’s sport in the world, with nationally televised games averaging 413,000 views per game.

Stern’s achievements in the commissioner role was a testament to his tireless work ethic, but his intense personality played a part as well.

Stern certainly fit his name; the commissioner had a reputation for being uncompromising and no-nonsense, anticipating things to be done correctly by not only players, but coaches, journalists, and everyone he dealt with. His expectation of consistent preparedness raised the bar for everyone around him–on the court and well beyond.

Lyons said, “He was hard-charging. I was asked what the difference was between David in a boardroom and David in a diner in Scarsdale ordering breakfast, and my answer was that he just sort of expected competency. Whether it was from someone serving him a cup of coffee, or cutting a massive deal for the NBA’s TV rights for 20 years,” he continued, “he expected the people on the other side of the table to come prepared, and he hoped that the chef in the diner had prepared a decent meal. And he didn’t take well to incompetency.”

This persona, while intimidating and difficult at times, earned Stern respect from Beck. “I didn’t always like him, but I always admired him.” He continued, “David was a force of nature. David was the proverbial smartest guy in the room, and if you didn’t believe it, he’d tell you. And you probably would believe it because you listen to him for five minutes and you’d be like, ‘He’s got me beat.’”

The monumental impression Stern had on the game of basketball, and even the landscape of modern athletics as a whole, is undeniable. According to Sorkin, his legacy should even reach beyond the world of sport entirely. “I will remember him as someone who had a much larger impact on the world than sport…I hope he is remembered for someone who had an impact on everything from our culture to race relations to geopolitics.”

But to those who knew him well and in a more personal manner, Stern will be remembered differently.

“It [the Stern interview] was the most important interview I have ever done in my life. And now I have interviewed the president and the pope and everyone else, but he is the one that is the top for me.” Sorkin continued, “I will remember David Stern as a mensch. This sort-of Uncle David-like figure in my life who was always very supportive and who helped advance my career at times. He owed me nothing.”

Note: David Stern exclusively spoke to Tower reporters regarding the controversy between the NBA and China, and was featured in the article The Billion Dollar Tweet. This is yet another example of Stern’s generosity and mentorship. He will be missed greatly.