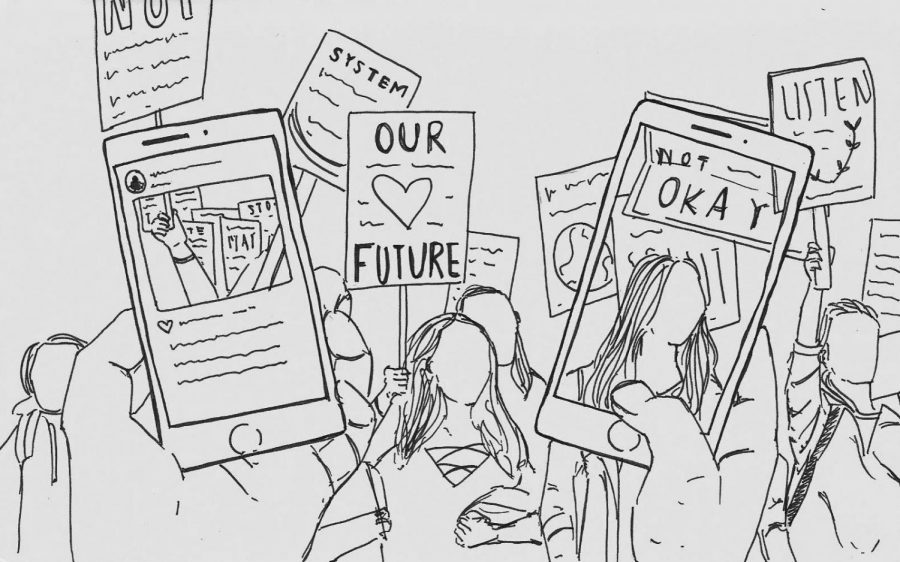 In a world where the President’s primary communication with his constituents comes through Twitter, it is foolish to dismiss social media as an invalid outlet for politics, resistance, advocacy, and education.

Some argue that social media encourages performative “slacktivism,” for example, posting an Instagram “story,” visible only for 24 hours to an account followed exclusively by your echo chamber of friends. This type of behavior comes across as self-congratulatory and is criticized for the minimal effect it has on the cause being advocated.

However, to paint all social media advocacy as ignorant “slacktivism,” is itself ignorant. Social media creates awareness for causes, it opens dialogue and, through social media, people can find those with shared ideas and discuss, and also learn to defend their arguments to those whose opinions differ. Social media also allows people seeking to effect social change to mobilize support and win converts to their cause.

Social media’s critics argue that simply sharing a photo isn’t enough to change laws or stop climate change. And while they are right that more has to be done, they ignore that it is often through social media that minds are changed, awareness is spread, and action is inspired. A Pew Research Center study found that nearly 70 percent of Americans believe that social media is important to accomplishing political goals and creating movements for social change.

Without social media, The March for Our Lives, a student-driven anti-gun violence movement would never have taken off. Its leaders used Twitter and Instagram to share their traumatic experiences with gun violence and organize the national student walkout. Additionally, the mass numbers of likes and comments on these posts were a physical show of support for gun control to politicians.

In the recent pro-democracy pro tests in Hong Kong, social media was used to mobilize people to appear at demonstrations in support of their cause, but also to disperse when word got out that the police were to appear. In addition, the demonstrators used social media to win over support to their cause, by, for example, posting amateur footage of police brutality on Instagram and Twitter.

These protests, the popularity of which were enhanced by the use of social media, led to dramatic results at the ballot box in the Hong Kong local elections last November. Turn out at those elections was the highest in 20 years, and more than half of the 452 district council seats changed hands from pro-Beijing candidates to pro-democracy ones.

Social media is not simply a place to show support for a cause or to organize, it is also a platform to raise money for these causes. For example, Twitter model, Kaylen Ward, who goes by The Naked Philanthropist, sold her nude photos on Twitter to raise money for the Australian bush fires. It would be easy to write her off for using Twitter and nudity to raise money, but she raised over $1 million for this cause. This would not have been possible without the connection social media provides.

Further, while awareness might not be enough in the case of the Australian bush fires, which loom large in our consciousness and represent an issue over which we can all unite, social media can make a difference when it comes to controversial or long-stigmatized issues.

Thus, for an issue like sexual harassment, social media is a platform for those with a shared experience to come together. The Me Too movement began as a hashtag, and with one post, but as more posts were added, others were encouraged to bring decades of hidden sexual abuse and workplace harassment to light. The popularity and spread of “Me Too” posts are precisely what created a comfort zone for others to come forward.

According to the Pew Research Center, 20 percent of adults “often” get their news from social media, while print newspapers are at 16 percent. Further, 36 percent of young people, ages 18-29 “often” get their news from social media. And while some may say, just pick up a newspaper, oftentimes, the newspaper is quoting the president’s Twitter feed. Additionally, respected newspapers chat’s TuneIn has videos from The Wall Street Journal, NBC, and CNN, and The Washington Post boasts over 350 thousand followers on TikTok, and posts meme videos and short news blitzes.

Like it or not, socia media has become a  part of our news diet, and fighting it won’t get us anywhere. We want young people to be advocates, especially at Masters, which places an emphasis on

social change. So why shame us for using social media to learn and grow?

Social media is so easy to condemn; it is frequented by teens, uses pictures and short bursts of text, and anyone can share a post. And it is also true that misinformation has and continues to be shared on some platforms. But it is precisely because of its accessibility and power to reach young people that we must recognize its merits. Social media is free to use, it fosters connection across the globe, and it is certainly here to stay. Through social media, political advocacy has been transformed from a fringe or niche activity to a mainstream one. We should learn to harness its mighty power for good in the world.