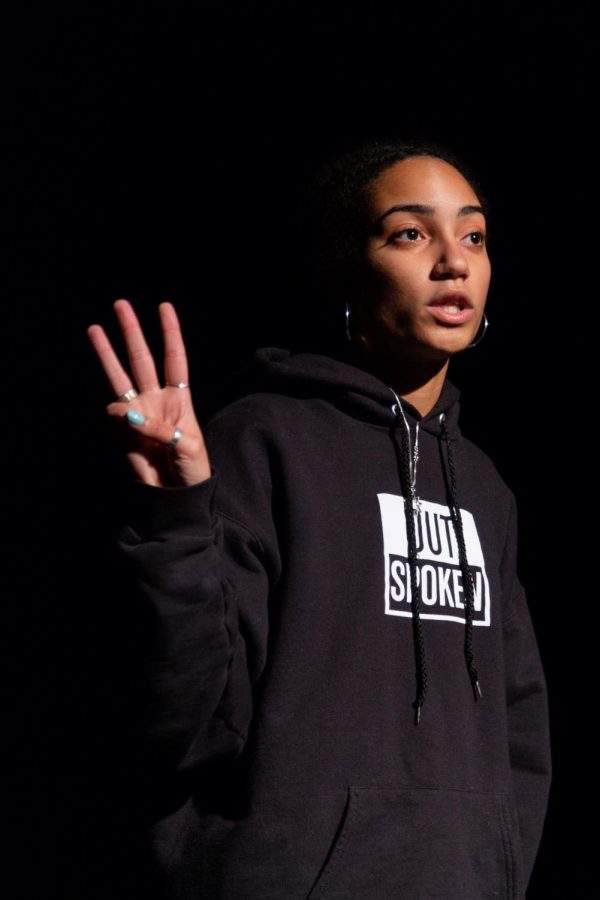 OUTSPOKEN'S ANNUAL WINTER SHOWCASE took place in the Experimental Theater on Jan. 10 and featured the spoken word poetry of 12 upper school students, including Zia Foxhall '20. In addition to their showcase, the group hosts several "open mic" nights throughout the year, which are open to all members of the community.

From Katharine Duval’s theme of living in the moment to Carolyn Hohl’s creation of a new holiday for the homewreckers and the binge drinkers to Zia Foxhall’s poem about her fleeting childhood, the Outspoken performance explored a range of different topics and personal narratives. At 6:59 p.m. on Jan 10., the Experimental Theater was filled with students, faculty and friends, all waiting in anticipation to watch the annual Outspoken Showcase. And at 7:02 p.m. the show began.

Throughout the entire performance, the audience snapped their fingers and echoed “oohs” and “aahs”, the sound resonating through the theater. Junior Emerson Del Monte attended the showcase for the first time and was impressed by all the performances.

“It was  really fantastic the way different students were able to go up and share different aspects of themselves that you might not normally hear about.” In comparison to other forms of artistic expression, such as theatre, Del Monte believes spoken poetry has more truth to it.

“Poetry is a wonderful way for people to express themselves. Often, spoken word poems have issues of identity or beliefs embedded in the writing, though that’s not always true. It fits in terms of our community being interested in social justice, identity and honesty.”

Outspoken co-president Carolyn Hohl was pleased with how well her team performed, especially after all the hard work and effort they put in. She admits that one of her favorite pieces of the night was “Chasing at the Tail” by Katharine Duval.

“I loved the message of the poem. I took it to kind of be ‘Don’t let moments pass you by’. Kind of don’t focus on romanticizing a moment but focus on being a part of it, like living in the now.”

Sophomore Finn Alexander is new to the Outspoken family. After attending last year’s showcase, he was so impressed by the performances, that he decided to join the group in the fall. Alexander said he has enjoyed being a part of Outspoken so far because he has been able to learn different spoken word techniques and how to incorporate movement into his pieces. Describing his first showcase, his nerves set in.

“It was a little nerve-wracking. It was the first week after break, where every day we would stay until eight. It was definitely fun, but as the showcase drew closer, it felt like it would be impossible to memorize, but we ended up pulling through as a group.”

Emery said she is proud of Outspoken and how well they performed, both in terms of the delivery of their poems, as well as how much they supported each other. She is thankful for the fact that poetry is taught at Masters, because she said oftentimes English programs will cut poetry first if they need to fit more content into their curriculum.

“I’m just so happy that our community is a place where many students love poetry and are interested in literature and the arts. The group couldn’t function in a school where kids weren’t willing to write original poetry and get together every Tuesday to work on their writing.”