The Impeachment Trial: from inside the Senate Chamber 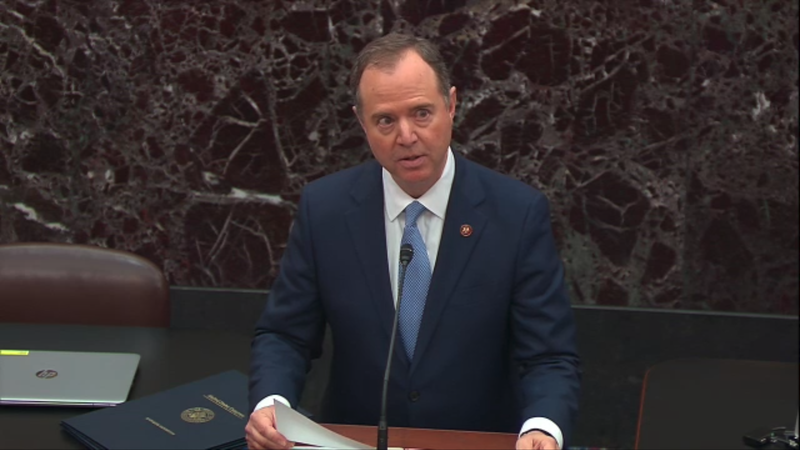 As Supreme Court Chief Justice John Roberts entered the Senate Chamber, and all 100 senators rose for the prayer conducted by the Senate chaplain, I began to feel like a part of history. I wasn’t just watching the impeachment trial – I was at the impeachment trial. But it wasn’t just the fact that I was sitting in the same room as some of the most famous people in the world, it was also what I took away in terms of the role of government in our society.

It was only the third time in American history that a president has been impeached. First it was Andrew Johnson in 1868, then Bill Clinton in 1998, and now Donald Trump in 2019. On Wednesday, Dec. 18, Trump was impeached on two articles, accused of Abuse of Power and Obstruction of Congress. But it wasn’t until after the new decade had begun that the highly-anticipated trial began.

When your mother is a history teacher, taking the opportunity to witness a moment like this, first-hand, was a no-brainer. So after school let out on Thursday, Jan. 23, we loaded our bags and drove off for the capital.

After the 250-mile trek the night before, we got up early on the morning of January 24 and headed to both New York Senators’ offices (Kirsten Gillibrand and Chuck Schumer) in order to get tickets to the trial. As we walked to the Capitol, it finally hit me: we were going to be part of one of the most memorable moments in U.S. history.

“Wave as you go by,” laughed a police officer at the Capitol Visitor Center as we made our way through the crowd. Special tickets from Sen. Schumer’s office allowed us to bypass the unending public line and gave us two-hour admission to the Senate Gallery, rather than the standard 15-20 minutes.

After a handful of security screenings, we made it to the top floor where we were able to get a surprise glimpse of South Carolina Senator Lindsey Graham, crowded around by a multitude of curious reporters. As we made it through the last checkpoint, the double doors were opened and we were inside.

With an impeachment trial being the only time in which every senator is at his/her desk, every seat was full. Elizabeth Warren and Bernie Sanders to the left, Mitt Romney and Mitch McConnell to the right. I couldn’t believe I sat in a room with 100 of the country’s most-famed politicians.  Meanwhile, Senate Pages – high school students who assist senators by carrying notes, bringing beverages and briefing materials, etc. – traversed throughout the chamber, bringing water to all the senators, who were reading and writing diligently.

Before the trial commenced, there were a few notable moments. We could hear and see New Jersey Senator and former presidential candidate Cory Booker laughing with some building staff, as if he had been told a great joke. Not long after, Chief Justice John Roberts entered wearing a traditional gown, while lead impeachment manager and California Congressman Adam Schiff stood talking with the rest of his team – the trial was about to begin.

What an incredible experience it was. As I peered around the room, it was amazing to see the difference between what the broadcast on TV looks like versus the rest of the room in person. Speeches were presented by prosecution members Jason Crow, D-Co., Hakeem Jeffries, D-NY., and Adam Schiff, D-Ca about Trump breaking Article 1. In particular, Jeffries gave an extremely powerful speech, in which he described how America can overcome any difficulty, but Trump’s abuse of power is a great attack on American character.

“America is a great country – we can handle adversity better than any other nation in the world. But what are we going to do about our character?,” he said.

As the time approached three, we looked for the last time before making our best effort to leave silently. After returning the tickets to Schumer’s office, we stayed the night in D.C. before returning home on Saturday. A few weeks later, the trial finally concluded, before a vote in which Trump was acquitted on both charges.

Though it was an amazing adventure in being able to experience an important moment in history, I think it was the process of it all that was the most impactful. We were allowed to just show up, free of charge, not having any connections with anyone. We got to sit for two hours, watching our elected officials in action. We were able to be a part of one of the craziest times in all of American history. But why is that?

Looking at it in a bigger sense, I think this is what government was meant to be. From the times of “no taxation without representation” to the present day, the founding principle of a democracy was that the people elect the representatives so that their ideas and ambitions may be represented equally, fairly, and justly.

Going forward, this experience will always be a reminder to me that the role of government in America is to incorporate the ideas of the public. It’s to make sure that no voice is lost and that every voice is heard. And it is this system that makes America the greatest country in the world. Abraham Lincoln put it best in his famous Gettysburg Address: “Government of the people, by the people, for the people shall not perish from the earth.”