Germany and the coronavirus 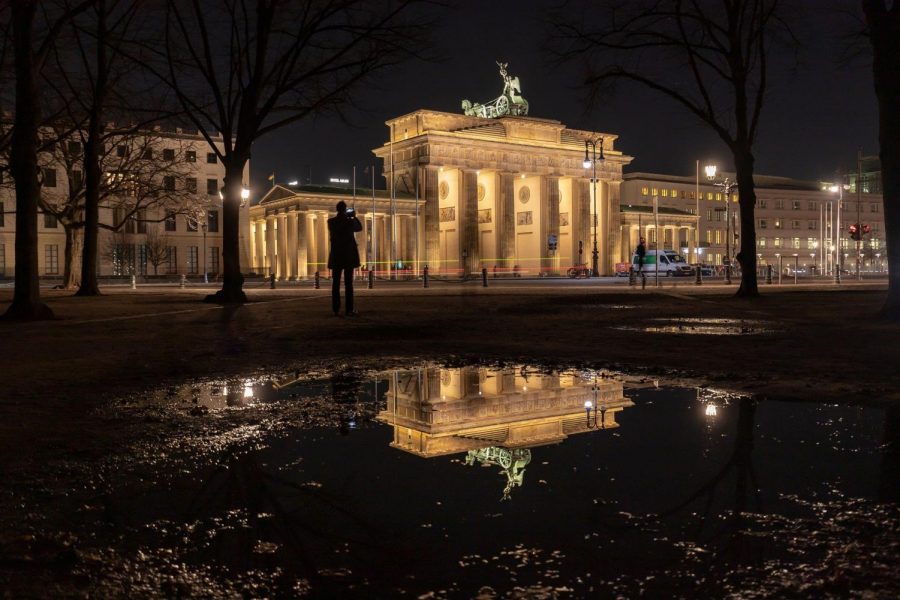 This picture shows the deserted streets of Berlin.

Empty streets, empty restaurants, empty shelves – pictures like this have become the reality in a large number of countries as a result of the coronavirus. Behind these similar images, however, every country has its own story of the pandemic and its own tactic to deal with the spread of the virus and its effects. This article will take a closer look at the most populous EU country and its situation amidst the coronavirus pandemic: Germany.

Germany recorded its first person infected with Covid-19 on January 27 in the Starnberg county in Bavaria in Southern Germany. Since then, case numbers have grown to 101,178 cases at the time of writing with 1612 people dead. The first death had occurred on March 9.

In comparison to other large European countries, such as Spain or Italy, where the death rate is at about 9.8% and 12.5% respectively according to the latest reports, Germany has a low death rate with 1.6% of reported infected people dying. This relatively low fatality rate has been attributed to Germany being hit later than Italy and thus being able to better prepare for the crisis. The country’s extensive testing capabilities and contact tracing have been cited as further reasons.

As in so many other countries, Germany reacted with measures to prevent the spread of coronavirus, as more were getting infected. At the beginning of March certain schools, which had confirmed cases, started closing. Moreover, Germany banned almost all travel for non-EU citizens and started an operation to bring back its citizens stuck in foreign countries. On March 22, a nationwide lockdown went into effect. As a result, one is only allowed to be in contact with either only one other person or people from one’s own household. Furthermore, restaurants are open only for takeout and non-essential body care business, such as barbers, are closed. As Germany is a federal republic, however, measures may still vary from state to state. For example, five German states – Bavaria, Berlin, Brandenburg, the Saarland, Saxony and Saxony-Anhalt – have enacted even broader restrictions on day to day life, allowing the exit of one’s own home only with “valid reasons.”

Germany‘s federalism and its resulting differentiated response is also displayed in the school system. Education is regulated by the states themselves. Although every state has closed its schools, scheduled reopening dates differ. In Bremen, for example, schools are supposed to reopen on April 15, while schools in the Saarland, the first state that had decided to close its schools, are planned to open their doors on April 26. Another example are the senior leaving examinations, called Abitur examinations. Under usual circumstances, these tests already vary from state to state. During the time of the pandemic the differences are more apparent than ever. The state of Bavaria postponed its exams to the end of May and the beginning of June. Meanwhile, written examinations in the state of Hesse took place in March.

Besides the health effects of the coronavirus, Germany’s economy is hit hard with a study by the German economic research institute Ifo predicting a 7.2 to 20.6 percent decline in the country’s gross domestic product growth rate and 1.8 million people potentially losing their jobs.

In order to deal with the economic effects of the coronavirus pandemic, Germany is rolling out a 1.17 trillion Euro bailout, the biggest one in German history. The plan foresees that small businesses, self-employed, artists and care workers get direct grants of up to 15,000 Euro over a period of three months. Furthermore, the government will provide large corporations with credit guarantees and has additional funds available for direct government stake in the companies. Also, means testing for certain social security programs will be suspended for half a year. In addition to that, new regulations for the so called “Kurzarbeit,” or short-work, program have been put in place. The program is designed to keep companies from laying off their employees during times of crisis. When the company cannot function at an expected capacity with its employees working fewer hours, the enterprise is allowed to cut a percentage of the employee’s wages. 60 to 67% of the lost wages will then be covered by the government.

To finance the bailout, the government is taking on 156 billion Euro of new debt. In order to expand the debt by such a large amount, an action that is restricted in the country’s constitution, the German government needed to trigger an emergency mechanism.

To increase government revenue, the idea of a onetime wealth levy was floated by Saskia Esken, the chairwoman of the German Social Democratic Party (SPD). It is unclear however, whether this concept will become a reality.

As a side effect of the current situation, Germany  might now achieve its climate goal of reducing its greenhouse gas emission by 40% compared to 1990 levels. This was something that had not been deemed possible before the outbreak.

The coronavirus poses a serious challenge for every country including Germany. At the moment, the country is heavily focused on dealing with the coronavirus crisis. However, for Germany, the challenge is not only a national one. Outside of its own borders, the European Union is standing at an important moment in its history. Just like on the domestic front, crisis management will again be needed.