Supporting survivors should not be partisan 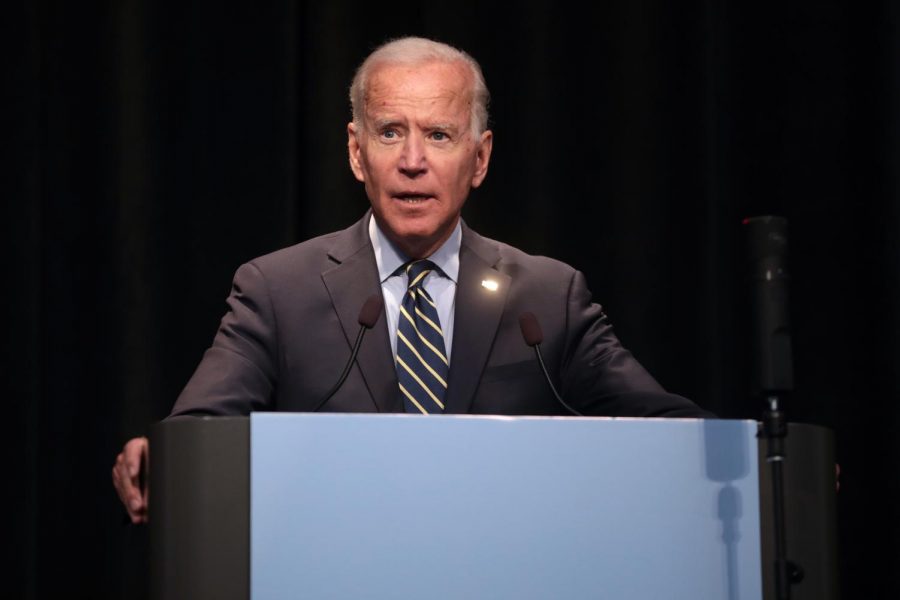 Democratic Presidential Candidate Joe Biden is likely to be the Democratic nominee against Republican President Donald Trump in the 2020 election. https://flickr.com/photos/gageskidmore/

Amidst allegations of sexual assault and a hearing before the Senate Judiciary Committee in 2018, Brett Kavanaugh was confirmed to the Supreme Court with 50-48 votes, the narrowest margin in modern history.

Only one Republican senator voted against the conservative justice, and only one Democrat voted in favor.

Kavanaugh’s confirmation could be viewed as an example of hyper-partisanship, or, as the Democrats argued, an example of their commitment to supporting victims of sexual assault.

However, the recent response, or lack thereof, to sexual misconduct allegations against Joe Biden, who is the front-runner for the democratic presidential nomination, has shown that many Democrats and liberal activists and news organizations are more concerned with party politics than with the #metoo movement.

On March 25, 2020, a former Biden staffer, Tara Reade alleged on a podcast by Katie Halper that, in 1993, Biden had pushed her against a wall and sexually assaulted her, telling her, “you mean nothing to me.”

The Biden campaign has denied this allegation.

According to New York Magazine, there are currently eight sexual misconduct allegations against Biden.

However, instead of supporting Reade, as they did Christine Blasey Ford, Kavanaugh’s main accuser, many liberals have been dismissive of Reade’s allegations against Biden. And while Ford and Reade’s cases are of course different, one would expect that those who championed Ford would not immediately dismiss Reade’s account.

Even actress Alyssa Milano, whose 2017 tweet, “If you’ve been sexually harassed or assaulted write ‘me too’…,” inspired women to come forward with their long-repressed experiences of sexual assault, has been vocal in her support for Biden.

While she supported Ford against Kavanaugh, she gave a statement to TV host Andy Cohen emphasizing the need for “due process” for Biden.

While I of course believe in the principle of “innocent until proven guilty,” the blatant disparity between many liberals’ treatment of Reade’s allegations and those of Ford’s is concerning.

Further, left-leaning news outlets, such as The New York Times and The Washington Post, didn’t cover the allegations against Biden until 19 days after the story broke; while CNN published over 700 articles on Ford’s allegations, it waited 24 days to publish just one story on Reade.

This stands in stark contrast to right-leaning outlets like The New York Post, Fox News, and The Boston Herald, which all published stories weeks prior to The Times.

The New York Times has also been criticized for changing a sentence in their eventual story. It initially read: “The Times found no pattern of sexual misconduct by Mr. Biden, beyond the hugs, kisses and touching that women previously said made them uncomfortable.”

The Times stated that, after complaints from the Biden campaign about the phrasing, the sentence was changed to: “The Times found no pattern of sexual misconduct by Mr. Biden.”

Twitter, too, has seen many Democrats criticizing Reade, accusing liberals who share her story of aiding Trump’s re-election effort. Likewise, many conservatives who strongly supported Kavanaugh, have spoken out in support of Reade.

More shocking still is the silence from many self-proclaimed champions of women, like Senator Kirsten Gillibrand and Senator Amy Klobuchar, who had both endorsed Biden for president before this new allegation. Both women spoke ardently against Kavanaugh and in support of giving survivors a platform to share their stories.

But it is not enough only to support those survivors who bolster your agenda.

This is not to say that Democrats are better or worse than Republicans when addressing sexual assault. Both parties have shown their partisan manipulation of the issues.

During Kavanaugh’s hearing, nearly every Democrat, including Biden, spoke in support of Ford.

Biden said, “For a woman to come forward in the glaring lights of focus, nationally, you’ve got to start off with the presumption that at least the essence of what she’s talking about is real.” On the other hand, his treatment of Anita Hill – who testified against then-Supreme Court nominee Clarence Thomas during his confirmation hearings in 1991, alleging that he had sexually harassed her – has been criticized.

Despite this, Biden was instrumental in bringing about policy changes under Title IX that have strengthened the way universities investigate sexual assault claims.

To Democrats and Republicans alike, it isn’t enough to support survivors when it helps your campaign or makes you look better.

The truth is, with sexual misconduct, it is almost always a case of “he said, she said,” and I’m not arguing in favor of one or the other. Instead, I am asking you to be consistent in your judgments. Don’t simply believe the women who threaten the careers of politicians you despise, and denounce the ones that threaten your candidate. And further, let’s acknowledge the sacrifice survivors make when they come forward – their reputations are often destroyed and they receive hate mail and death threats – we should not reduce them to political pawns.

In the 2020 presidential election both major candidates have allegations against them, with 23 against Donald Trump and eight against Biden, so voters will have to choose the candidate whose policy aligns most closely with theirs. Hopefully, in the future, with less-biased reporting and more principled politicians and activists, we can have an election in which all of the candidates are free of allegations of sexual misconduct.