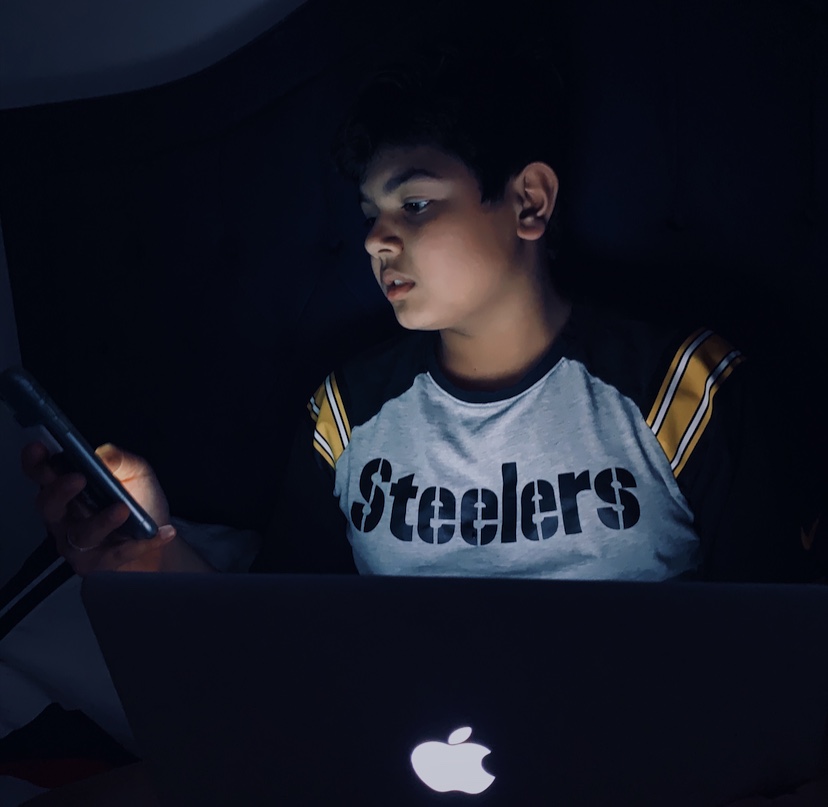 The American Academy of Pediatrics (AAP) recommends that children ages 11 and above spend no more than two hours a day in front of a screen. However, according to a 2018 report from the Pew Research Center, teens spend an average of nine hours a day online, and quarantine doesn’t seem to be helping—both because of online school time and recreational screen time.

The majority of schools and universities across the globe were forced to close their campuses and transition to online learning during the ongoing COVID-19 pandemic. Schools now are limited to either conducting class online or assigning extra work to fill students’ time.

Many schools have chosen the virtual classroom option, including The Masters School, in order to provide students with some sort of connection during a time when they otherwise would be cut off from others completely. Now, students are required to be looking at a screen and, at Masters, are spending one to four classes a day, each upwards of an hour, online.

Sophomore Caleb Jakes believes that staring at a screen for the entire class is much different from an exciting class around a Harkness table; he said that 80 minutes straight of a virtual class is draining and unstimulating.

“When you get to the end of the day and have two classes back to back on a screen, it just completely felt like they were dragging out,” Jakes said.

Freshman Tanner Dandridge has found himself becoming bored and restless during long stretches of online classes, too.

“A lot of my classes aren’t that engaging because there’s not much else to do besides sit there and listen to someone lecturing through a screen,” Dandridge said.

Senior Tim Borowiec is spending his last semester of high school learning online and feels a key part of learning at Masters has been lost. He has had to balance his love for screenwriting & movie-watching on the computer and long hours of remote learning while being careful not to get a headache.

“Harkness is pretty much hopeless over google meet. Even when everyone’s putting in the effort, it’s a lot more awkward and there’s no flow to the conversation, but I recognize there isn’t much we can do about that,” Borowiec said.

On top of that, the stay-at-home protocol limits what anyone can do outside of school, so many find themselves looking to their devices to kill their boredom.

According to the Washington Post, iPhone screen time reports show people’s screen time increasing by more than 50% during quarantine. According to UNICEF, digital game distributors, such as Steam, reported a considerable increase in the number of daily users over the past weeks: from 19 million in early March to a record high of 23.5 million in early April.

Like many others across the globe, when Jakes isn’t in school, he finds himself picking up his phone and watching anything he can find on his computer when there’s nothing else to do.

“It usually goes: ‘Well, I have nothing to do, let me see what’s on Instagram or Youtube,’ and it’s because there’s always that option to be on your phone when you’re stuck at home that I realized that I would be on my phone for half the day; that’s crazy,” Jakes said.

Dandridge has also seen his non-required screen time skyrocket during the quarantine to spending almost 66 hours a week on just social media.

Students like sophomore Alana Gould are spending hours binge-watching entire shows in weeks, in addition to remote learning during the weekdays.

“At the beginning of quarantine, I was just in the house doing nothing so my parents took off my screen time restrictions. Now, I have all this free time where I can go on my phone, and I can’t see my friends or go to school so it’s the next best thing,” Gould said.

Sophomore Camille Smith averaged 16 hours on her phone one week during quarantine, and 16 and-a-half the next. She believes the exponential growth of her screen time has been the effect of not being able to occupy herself with normal routines, including spending time with friends and going to sports practices.

“I think my screen time has gone up due to the fact that usually I wouldn’t have all of this time to just sit on my phone all day. I didn’t have anything to do so I was on my phone all hours of the day and night,” Smith said.

While screen time levels have no doubt elevated tremendously within the Masters community and on a larger scope during this era of social distancing, many people are taking steps to minimize overexposure to screens, including taking walks throughout the day, unplugging on weekends if possible, and ordering blue light glasses to prevent eye strain from spending long periods of time on screens.

“I find myself just rotating through the same three apps for 11 hours a day, but pretty much the only reason I’m on my phone so much now is because I’m so bored, and I’m trying to get rid of the habit,” Dandridge said.