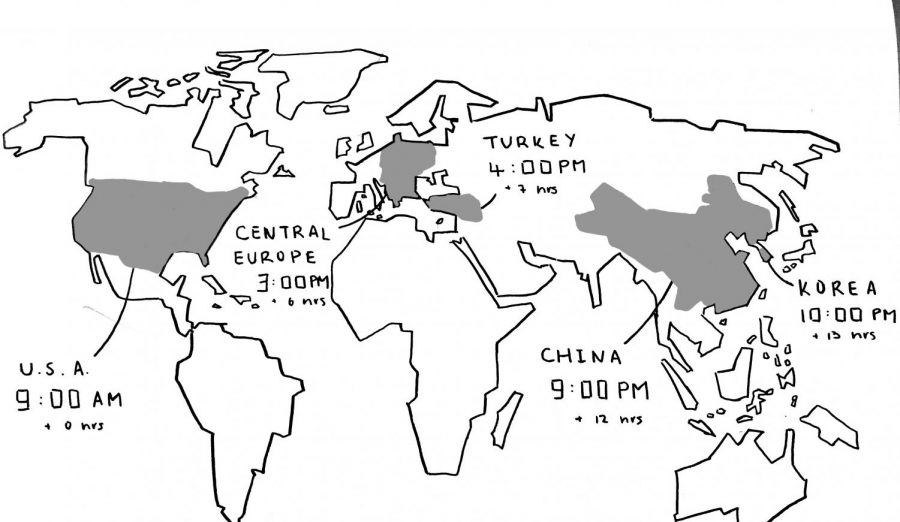 A map of the world shows the variances in time zones across the areas where Masters students are residing during the COVID-19 pandemic.

With the recent events surrounding COVID-19, the closure of Masters and the dorms, many of the international students are facing challenges with the online schooling that has been put into place. Most of the problems that they’re noticing are revolving around great time differences and sleep schedules, along with the struggle to pay attention in class, whether that class be live or pre-recorded.

In an email to international students, the administration said that those who have classes past midnight do not have to attend the aforementioned classes. However, many students have still been staying up through very late hours to be able to attend live classes. Taiwanese international student and sophomore Andrew Chang is 12 hours ahead of our Eastern Standard Time schedule, and says he lives an “opposite day.”

“I switched my schedule to accommodate the Masters school day because I value live classes,” Chang said.

Chang’s typical day consists of going to sleep right after classes at 3:30 a.m. He then wakes up between 12 – 1 p.m. to eat breakfast and start his homework. His first-class starts at 8:30 p.m., his local time.

Many students who live in the same time zone as Andrew choose not to attend later classes, putting their sleep schedule first. For these students, their only way to experience class is by watching the pre-recorded versions required to be sent to them by teachers.

Zeynep Ozturk, ‘20, has also found it difficult to adjust to her new schedule. Since Ozturk lives in Turkey, her school day ends at 10:30 pm. Therefore, Ozturk must attend all of her classes.

“By the time I have my last class,” Ozturk said, “I find it really hard to focus and I am almost fully checked out.”

She noted how she normally enjoys going to sleep early and this new schedule has interrupted that. Ozturk also referenced how she knows that other students have been staying up past midnight to attend all classes, even though they do not have to.

“I have heard that it is quite difficult to watch pre-recorded classes and try to learn from them.” Ozturk also mentioned how since she is unable to do homework after class, she finds herself scrambling to do it each morning.

“We based the decision off of looking where students were studying from, and there were basically two groups: Europe/Africa and East Asia,” Fish said.

Fish also recognized difficulties within the timing for students in Europe and Africa. “Typically, boarders are going to bed around 11 or 12, so the schedule isn’t unreasonable in terms of bedtime. However, it can interfere with things like dinner time or family time, where one is typically away from their computer,” he continued. Fish has also been requesting and receiving feedback ever since the online school began. “Very few students [in Asia] that I’ve heard from are staying up through third and fourth-period classes on a consistent basis,” Fish said. “We’ve been advising them not to stay up past midnight for class and to take advantage of times like X-band, where they can ask their teacher questions they weren’t able to in class.”

Chinese international student and sophomore Jingyuan “Andy” Liu has chosen to take advantage of the class recordings instead of staying up to be in class live.

“When I wake up in the morning, usually around 9:30, I start watching the class recordings from the afternoon classes in the previous day,” Liu said.

Liu did not seem to have any problems watching the class recordings,  stating that even though he could not participate in class discussions, he did not mind watching a recording of the classes. “I actually like this schedule of two classes in the morning and two classes at night more than the schedule we have if there is no time difference. It feels much less tiring to get through the day.” Liu said.