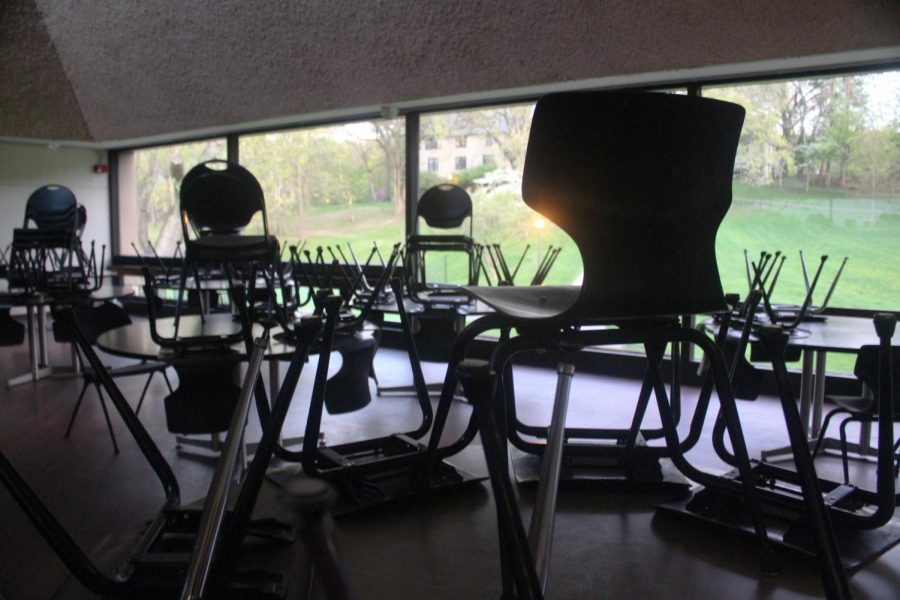 Chairs stacked on the tables in the Cameron A. Mann dining hall. Brock employees, who staff the dining hall, were laid off on March 30 and had to file for unemployment. They are now beginning to receive stimulus from the Paycheck Protection Program (PPP).

Over 50 days since The Masters School closed on March 9, the Masters dining hall staff received their first paychecks from the Paycheck Protection Program (PPP) on Friday, May 1. General Manager Lee Bergelson was notified April 19 that Brock and Company, Inc., the school’s dining services company, had been approved to receive stimulus from the federal government; shortly after, he passed the word on to his colleagues in the dining hall who were “very happy to hear the news,” he said.

Bergelson added, “Prior to getting to news, [the employees] were concerned. There was a lot of doubt about when this was going to end… The fact that this [getting stimulus under the PPP] was able to happen and I was able to share that good news with them took a lot of that concern off of people’s mind.” He continued, “You obviously need your pay to take care of your family, so the response I got was extremely positive.”

Jojo Almonte, who has been a member of the Masters’ dining staff for 18 years, said, “I’m a single mom and my savings were going down. When I heard from my manager [Bergelson] that we were going to start getting our normal pay, that was an ‘A+’ for me. Now I can deal with my bills, my rent, my taxes, everything.”

Prior to being approved for stimulus under the PPP, all Brock hourly employees were laid-off on March 30 and had to file for unemployment.

The Coronavirus Aid, Relief and Security (CARES) Act passed by Congress on March 27, “provides $250 billion for an extended unemployment insurance program and expands eligibility and offers workers an additional $600 per week for four months, on top of what state programs pay,” according to Forbes article by Leon LaBrecque. However, according to Almonte, she was only receiving four days of pay (as opposed to a normal five-day work week) from the unemployment stimulus. Masters dining hall hourly employees were also not receiving any of the benefits they usually would from Brock, such as medical support, according to Bergelson.

Ever since, Almonte’s situation has been very challenging.

“Being a single mom is a lot of responsibility. Sometimes I didn’t eat because I had to give it to my kids. I had to stretch my money for my meals, for my car, for my insurance. It was a very stressful time because I didn’t know when it was going to end,” she said.

The COVID-19 pandemic has put many workers in a similar position – over 30 million have filed for unemployment in the last six weeks and the unemployment rate has risen to 14.7 percent, according to the United States Department of Labor.

A graphic by Nigel Chiwaya of NBC News depicts a graph of unemployment claims in the U.S. over the last 50 years. In the last week of March 2020, over 6.6 million people claimed unemployment. To put things in perspective, the previous high for a single week during that time period was 651,000, which occured in March 2009, during the Great Recession.

Almonte said that now, a “little hope is coming back” with the recent support from the PPP, which will allow Brock employees to receive their regular salary through the remainder of the school year. The first paycheck they received was for their pay during the week of April 19, according to Bergelson. They will be paid on a biweekly basis moving forward.

Meanwhile, Bergelson and some of the other Brock managers were able to get together on campus to donate perishable and non perishable canned/dry goods from the school’s supply to Hastings Food Pantry last month. He also said that every Friday they have been cooking lunch for the grounds, maintenance and custodial staff who have all continued to work on various projects around campus.