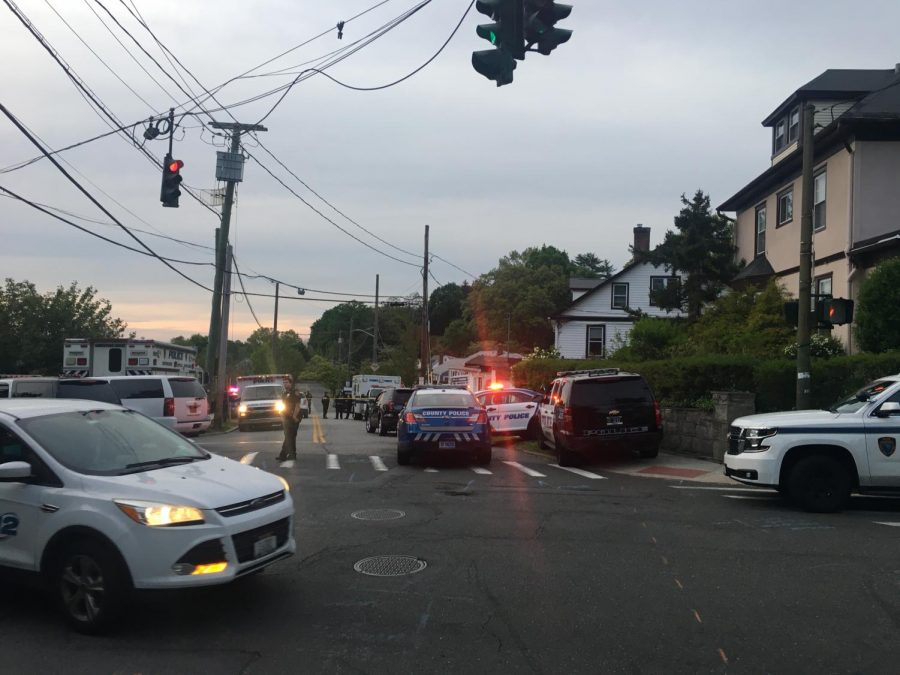 Helicopters circled the streets of Dobbs Ferry earlier this evening as masked passersby crowded the corner of Washington Ave. and Ashford Ave. A person had allegedly been barricaded inside a home, a police chief told town supervisor Paul Feiner.

Ambulances and police cars were parked several blocks from the home in question, with at least 10 officers standing close by, with many more in support vehicles.  A group of SWAT team officers were also walking on Washington Ave. toward Ashford Ave. with a vehicle trailing close behind. Eventually, they moved in closer to the home under surveillance.

Other police cars blocked off several other intersections surrounding the scene in Irvington and Dobbs Ferry, including Lefurgy Ave. and Myrtle Ave. as well as Sherman Ave. and Washington Ave. The police officers guarding these intersections declined to comment, but reassured concerned drivers that they were actively investigating the residence and doing the best they could.

The barricaded person was safely extracted with no injuries, Feiner added in an update to a reporter stationed at the intersection between Washington Ave. and Beacon Hill Rd. By 8 p.m. they were being “debriefed,” the reporter said.

After a police chief reported the safe extraction of an alleged hostage from a Dobbs Ferry residence, the Dobbs Ferry Police Department said, “There is no reason for alarm,” after contacting the homeowners. They continued by saying that the reports of a barricaded person were unfounded.

In a statement sent out to Dobbs Ferry residents, it read, “The police department is continuing to investigate. All roads are now open and the scene has been cleared.”

According to the Dobbs Ferry Police Department in a press release on Wednesday morning, the incident on Myrtle Ave. Tuesday evening is “indicative of a potential “swatting” type incident.” However, the situation remains an active investigation.

“Swatting” is a criminal harassment tactic, which often consists of a prank call to emergency services, in order to draw a significant police response to an address.

The department said that an unidentified male caller reported shots fired at a residence on Myrtle Ave., Dobbs Ferry, NY to 911 at approximately 5:52 PM.

The occupants of the residence were “removed to a safe area,” and SWAT team members entered the residence and “confirmed that all was in order within.”

According to the press release, there is “no current threat to public safety.”

This is a developing story. Stay tuned to Tower’s coverage for updates. Editors-in-Chief Kate Sibery and Mitch Fink also contributed to this report.