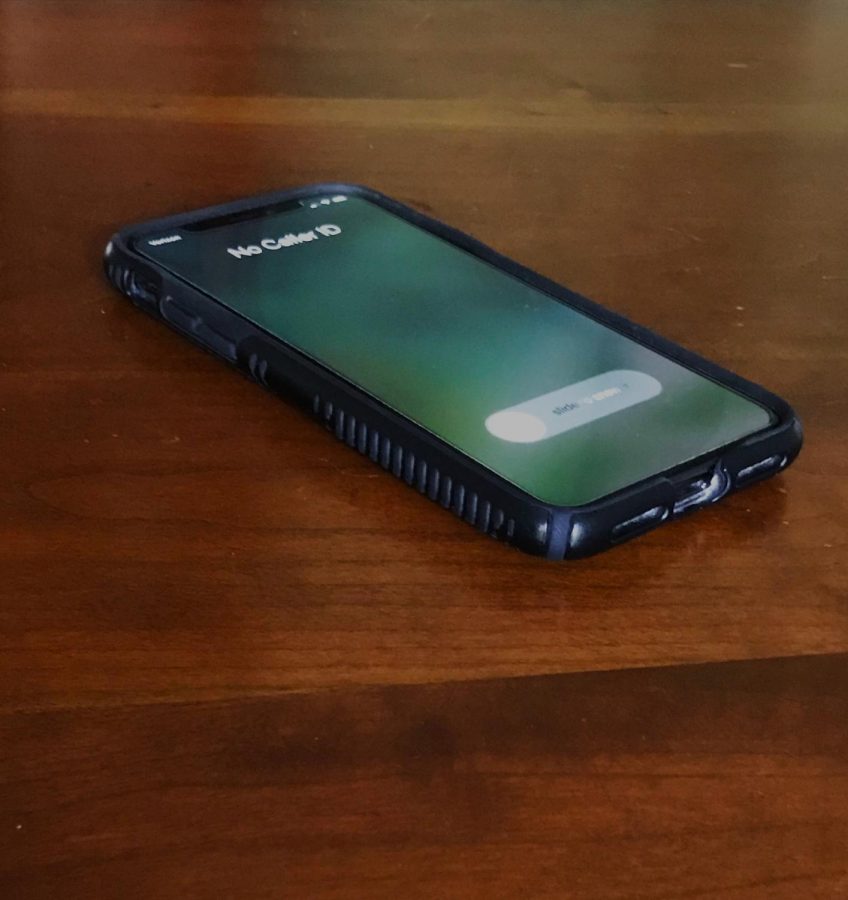 A phone receives a call from an anonymous caller. The intruder to the 10th grade class meeting used the dial-in feature on Google Meet as a private caller, and then went on to yell a series of expletives and racial slurs.

Sophomore Class MISH elections Google Meet, May 19––A 10th grade class meeting was suddenly interrupted when a private caller entered the meeting and began shouting expletives and racial slurs to a stunned group of students, faculty and advisors.

Sophomore MISH rep candidate Sabrina Wolfson said, “We just heard a lot of laughing, and so we didn’t hear anything again so no one really thought much of it,”

Later on, as Wolfson addressed the class in her candidacy speech, the private caller unmuted themself once again, cutting Wolfson off.

“Towards the end when I was giving my MISH speech, they [the private caller] unmuted and started screaming these racial slurs,” Wolfson continued.

According to those who were in attendance at the meeting, the caller made several derogatory remarks, shouting, “You pieces of s**t don’t deserve to be on this earth.” The caller also repeated the n-word several times.

Class of 2022 Dean Shelly Kaye immediately removed the intruder from the call, but the incident left many students and faculty members in a state of shock.

Wolfson said, “There were a couple of people that definitely took it to heart, one or two people expressed that afterwards that they were crying, and that it really hurt them.”

The phenomenon, more widely referred to as “Zoom-bombing”, has become a major issue associated with the global shift to virtual communication platforms. Earlier in May, a meeting of the Chinese Student Association from California Polytechnic State University was interrupted when 20 uninvited anonymous users joined, screaming a slew of racial slurs at the Chinese students.

Google Meet has been considered a more secure platform, as each meeting has unique join code and dial-in information. However, anyone who has the joining information is free to share it with people outside of the class.

Alexander said, “I’ve been in classes where someone would just join and say hello to the teacher as a joke, but for the anonymity of the caller to be used as a weapon, it left me very shocked.”

While the derogatory remarks weren’t directed at any one person, the screaming of racial slurs, specifically the repeated use of the n-word, seemed specifically to target students of color in the meeting. Sophomore Mali Black compared this situation to many others she has had as a person of color.

Members of the Tech Department and administration have been working to prevent any further occurrence of incidents such as this one, and are offering support to any student who feels that they were personally affected.

Wolfson said, “I know it was a really hard experience for everyone, no one could have expected what happened, and I think that the way that our advisors, and Ms. Kaye dealt with it definitely showed how caring, kind and supporting the community is.”

Upper School Head Peter Newcomb sent an email to the Upper School student body on Wednesday afternoon, describing the event and outlining steps Masters will take to prevent a similar incident from occurring in the future.

Newcomb said, “In an effort to help ensure that our Meets will be inaccessible to unwanted guests, the Tech department has closed off the calling feature, and faculty will be sending out new links for each of your classes; please be on the lookout for those emails.”

He continued, “What is clear is that now is a time to support one another and begin to heal.”

This is a developing story. Stay tuned to Tower’s coverage of this issue as more details become available.