Yearbook to be put online due to COVID-19 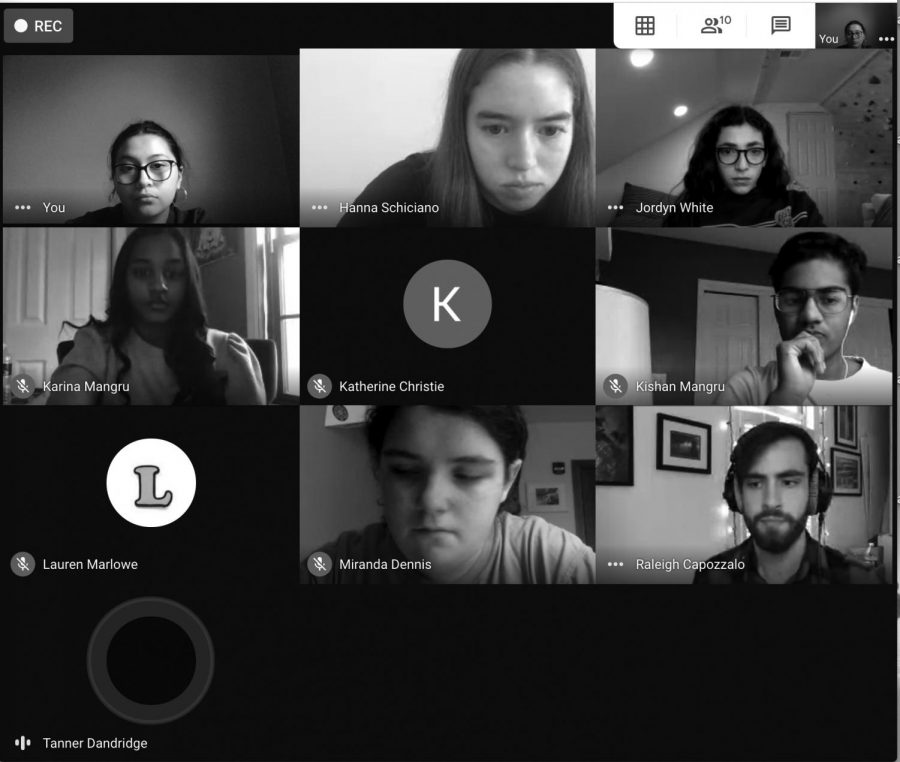 The yearbook staff gathers for a virtual meeting via zoom. This year, the team has decided to upload a digital version of the yearbook due to COVID-19 shifting their plans.

When Head of School Laura Danforth announced that classes would be cancelled through spring break, yearbook editors-in-chief Ariella Uribe and Kishan Mangru never expected the impact it would have on their staff. With three months of normal schooling down the drain, the yearbook staff has been forced to extend themselves further than ever to get the 2019-2020 yearbook, titled Masterpieces, published.

Their first challenge actually came before the school officially closed, as their yearbook printer, a company called Josten’s, informed the staff that they would have to submit their pages the week after spring break to expect printed yearbooks by graduation. This deadline was a month earlier than it had been in previous years, and for the staff, it meant working overtime through spring break. Uribe was especially proud of the work that their staff put into finishing the yearbook.

“We did pull through in the end, and I think that shows that we did a great job of teaching our staff this year,” she said.

As a freshman, Hannah Schiciano was new to the yearbook team, making virtual layout an even more complicated task for her. Though she had to work through spring break more than previous yearbook staffs, she believes that the staff was able to stay motivated by how important they find the final product to be.

Schiciano said, “Yearbook is the way the events from the year can be highlighted and remembered. For people to look back on the yearbook years from now and to see the memories,  that makes yearbook important to me.”

Another challenge that the staff faced was making up for the lost pages from cancelled springtime events. The length of each yearbook is determined early on in the year and according to Mangru, could not be changed by the time they saw that so many of the page spreads they planned like spring sports could no longer be created. The staff adapted to the circumstances, finding ways to fill the blank space.

“We had a lot of blank pages due to the lack of events around campus, so we had to improvise like with COVID-19 spreads or college recruits spreads,” Uribe said.

Now that the pages have been submitted, the printing should be complete by late May, according to Mangru. Once printed, the yearbooks will only be shipped to graduating seniors due to high shipping costs. According to Yearbook Faculty Advisor Raleigh Capozzalo, shipping will cost the school $8 for each domestic senior and $30 for each international senior. Although only a small number of the school will receive their yearbooks through the mail, it will still cost the school $1000 more than previous years.

Those who do not receive yearbook shipments will be able to pick up their yearbooks on campus in the fall, and in the meantime, an online issue will be sent out as classes end.

The editors acknowledged that the situation is anything but normal, but they have been working to make it as close to a conventional yearbook experience as possible.

“One thing that might be disappointing to some people is that they won’t be able to sign yearbooks this year. It won’t be the same, but we’re trying to find a way for people to have a similar experience, like a digital signing.” Mangru said.

According to Mangru, the digital signing program is provided by the same company responsible for their yearbook’s distribution, Josten’s.

If school remains closed through September, students may have to wait to get their yearbooks, but that is not Mangru’s biggest concern with an online start to the year.

“It’s really hard to teach a new staff remotely, because a lot of teaching is hands-on, like laying out a page or using a camera,” Mangru said.

Despite the concerns that the editors have for the next year, they believe that dealing with these unpredictable conditions bodes well for the coming years.

Uribe said, “I think this has made our staff stronger. It’s hard to make up a page out of thin air with no events, but I think we did a really good job.”

Capozzalo echoed a similar sentiment, stating that even though this may be his last year with Masters, he believes in a positive future for the yearbook staff.

“I was really impressed. I think [the staff] handled the situation really well . . . This just makes me think that yearbook is in really good hands for next year.”