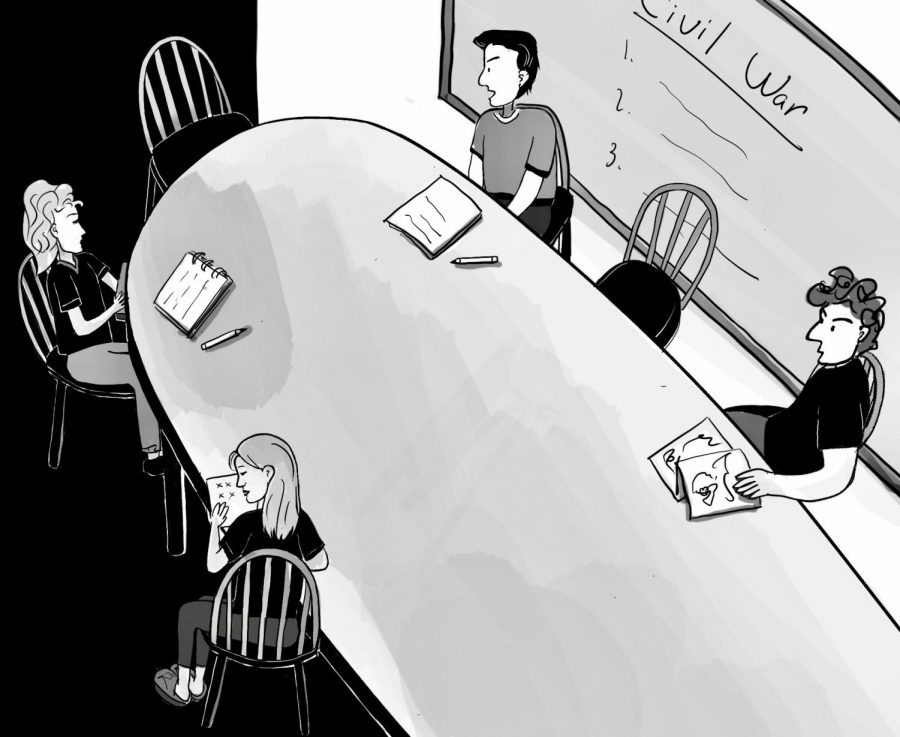 Masters middle school has switched from single-gendered classes to co-ed classes for many reasons, including hoping to create a more inclusive environment for children who do not conform to either gender.

The Masters Middle School will be shifting to completely co-ed classes beginning in the 2021-2022 school year, per an email sent to Middle School families by Head of School Laura Danforth and Middle School Head Tasha Elsbach on Thursday, April 30.

The gender-separated learning policy was implemented when the Middle School was established in 1994, as research was released about the benefits a single-sex Middle School experience could have, particularly with girls.

Danforth and Elsbach expressed three main reasons for this shift to co-ed classes: the financial benefits of greater enrollment agility, an adherence to the school’s equity and inclusion values, and the ability to balance the sizes of Middle School classes more effectively.

The Middle School has faced recent struggles in attracting applicants, particularly girls, because of the gender-separated class policy, Danforth said.

“We were doing the research, why we were not yielding more kids, and when we talked with families that decided to not attend here and go elsewhere, [gender separated classes] was one of the main reasons,” Danforth said.

The Middle School uses a single-gender quota system, which separates boys and girls in the admissions process, with a limited number of spots for students of each gender. As the disparity between male and female applicants has increased in recent years, the school has been faced with the issue of turning away qualified candidates in order to work with the single-gender quota system in place. This leads to fewer candidates being enrolled in the Middle School, and a subsequent loss in tuition.

“We have at least four, five, six mission-aligned, qualified boys that are on the waitlist for eighth grade. We’d love to have all of them, but we’re full. But we’re not full with girls,” Danforth said. “To not be able to accept them because we are full and [while having a vacancy with girls] is tough financially, particularly now” she said.

There was no correlation between the decision and the COVID-19 pandemic, but the shift will give the school more financial leeway in a time that is difficult for admissions offices at many independent schools.

Middle School parent Amy Parsons, mother of eighth-grader Jack Parsons, believes that the shift was a step to remain competitive with other independent schools in the area, like Hackley or Rye Country Day.

“Masters is a great school, and they have competition around them, and that keeps schools growing and changing, and wanting to be that much better,” Parsons said.

Another key factor for the decision was the consistency that a co-ed experience creates when it comes time to transition to the Upper School, particularly by maintaining similar values on gender expression.

Co-Vice President of Masters’ Parents Association Marie Fabian said, “I think that just overall it felt like a natural step in a school that is really trying to be respectful of gender expression and acknowledge that the binary that we have been accustomed to in the past is not going to be the right fit for every student who could be a great addition to the community.”

“I’m in the LGBTQ+ community myself, and I’m really adamant about LGBTQ+ people’s rights, so it was a little concerning to me that there wouldn’t be a space for certain people on the gender spectrum [with the gender-separated learning],” Simon said.

Simon’s concerns reference the possibility that a student would have had to identify as either male or female to attend the Middle School under the gender-separated class system, which could have created complications if a student didn’t identify with either.

Another goal of the shift to coeducation is the ability to distribute classes more evenly. Currently, many Middle School classes face the issue of having particularly small or large class sizes as a result of the gender separation.

Fabian said, “My daughter was in a four-person class when she was in eighth grade and it was not enough kids. Especially for a school that wants to use the Harkness model and have classroom engagement amongst the students be so pivotal in the learning, there is such a thing as too small of a class.”

While many have expressed their support for this change in policy, for some families the gender-separated policy was one of the driving reasons for their child’s enrollment into Masters.

Parsons said, “You can go to any of [Hackley, Masters and Rye Country Day] and get a great education. The all-boys learning was a differentiator for us and one of the big reasons why we chose Masters for our son.”

Much of the research which persuaded Masters to initially become gender-separated, such as Carol Gilligan’s book In a Different Voice, argues that single-sex education provides the best platform for Middle School girls to develop a voice in the classroom, and Simon hopes these values remain with the shift.

She said, “I hope that they find a way to still drive home the point that girls’ education and prioritizing girls’ learning is so important, because I don’t want it to turn into a place where it’s really male-dominated.”

Still, many Middle School students, faculty, administration and parents have received the news positively, especially given the new ability for the Middle School to become more aligned with its school-wide policy on gender equity and inclusion.

Middle School humanities teacher Mary Chappell said, “Looking at our school community, we have students that have different identities, and we need to welcome and include them all. It’s hard to do that when we only have a choice of one gender class or the other… So I think they made the decision for all the right reasons.”