Letter to the Editor: Maddy Blake responds to “I went to a peaceful protest – it was a sign of hope in a deteriorating America” 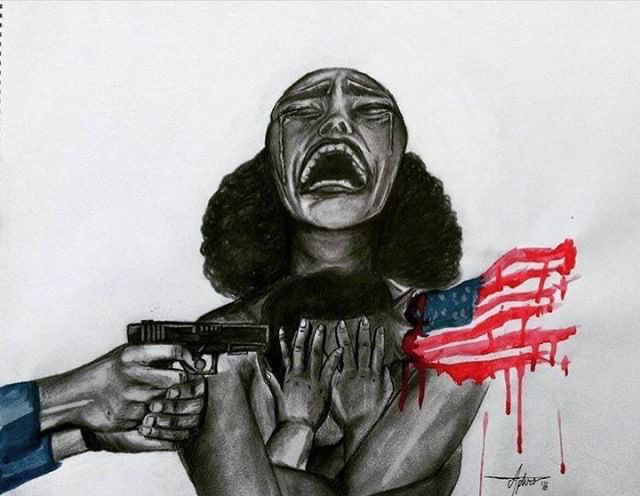 It was extremely hard to read the piece “I went to a peaceful protest–it was a sign of hope in a deteriorating America” because of how inaccurate, insensitive and out of touch it is. I’m not sure what part hurts the most but for you to say, “The way Floyd was killed was inhumane, unjust and something that should infuriate everyone. However I saw more than just anger being expressed by the people in Minneapolis. I saw mayhem. I was horrified, watching individuals among the crowd setting buildings ablaze, destroying a community…” was particularly frustrating. There should be no “however” when speaking about our retaliation to yet another killing of our people. Reading this makes African Americans feel as though we don’t have a reason to be upset when in reality, we have millions of reasons to be upset. It also expresses to us that the lives we have lost don’t matter and that whichever form of protesting we decide to use, peaceful or not, someone will always try to find a flaw in it. You may have been disappointed at what you saw but African Americans have been disappointed for centuries. There shouldn’t be a “however” because of the pain in the black community that no other race understands because of their privilege. Focusing on the “looting” or “mayhem” rather than the systemic injustice and oppression that led us here serves to further invalidate, make the oppression invisible. And that is exactly what some people want–to take the focus off these issues.

The first paragraph of the article says “putting together the final issue of my high school newspaper was an unforeseen challenge – my patience had deteriorated and after staring at my screen from dawn until dusk, my vision was blurred and my eyes ached. I just wanted to go to sleep. But instead, I turned on the TV.” While your biggest issue was finding an end-of-year topic to write on, African Americans have had to deal with having committed a crime that society refuses to forgive; being black. We leave our homes every day without knowing if we will return. People of color have been treated horribly due to injustices we face, and still, justice has yet to be served. Our voice is not heard. The “mayhem” you saw is the anger and rage that black people have due to being walked over, killed, and treated like animals. We have a right to be angry, we have a right to cause mayhem in the country we built; a country that has continued to treat us like nothing and continual lack of appreciation. Communities of color are decimated every day by countless forms of oppression, so I couldn’t care less about the burning down or looting of a Target.

Do you really have to wonder why you saw more than anger? For years, we have been angry, sad, broken, beaten and ignored by a society that owes us the utmost respect. But then again, who are you to tell African Americans what type of protesting is deemed acceptable? Do you know what it feels like to be watched whenever you walk into a store, to have white women clench their pocketbooks even tighter than usual when you approach them, or for your only birthday wish to be the ability to see the same day next year? Or what it feels like to sit in class and just wonder where your enslaved ancestors got their strength and the fortitude to keep going during a time when the world was not for us.

As mentioned before, African Americans have every right to burn down and destroy the country they built, especially when we are not shown appreciation and acknowledgment. After 400 years of oppression and maltreatment, people are tired of being peaceful. Black people were enslaved, treated worse than animals, degraded and worse between 1619 and 1865. But the abolishment of slavery did not end the dehumanization of African Americans. Our prison system was created against us and so was the education system, hence the school to prison pipeline. Society should be grateful the only thing African Americans want is justice, respect and equality because truth be told, we have every right to reparations and wanting revenge for what our ancestors went through. It’s time for black people to be put on the same pedestal that whites have stood on for centuries.

Why are white people lauded for protesting, even when said protests involve intimidation, the destruction of personal property, and violence? And people of color are called “thugs.” You want to know why Black people protest? I’ll tell you. Society only pays attention to us when we are dying or succeeding. We tried to peacefully protest and it didn’t work, so if burning a couple of stores is what will get your attention, then that’s what will be done. African Americans are being blamed for all the violence while less attention is being paid to the violence that continues to be perpetrated against them during these protests? In 1773, why was it okay for white people to riot and loot because they didn’t want to pay for taxes on tea. Or in 1919, was protesting justified when white people decided to ignite the Chicago Race Riot, resulting in 38 deaths? How is it not okay for black people to protest against the killing of our people in the “progressive” year of 2020? Just as you’re tired of hearing about racism and oppression, African Americans are tired of being profiled, killed, oppressed, and dehumanized. Famous African American novelist and activist, James Baldwin so beautifully said, “We can disagree and still love each other unless your disagreement is rooted in the oppression and denial of my humanity and right to exist.”

You may believe that there are other ways to get the point across, but I’m here to tell you that there aren’t. Our tears and lives don’t matter to you so why should we care about your stores? Our goal is to be heard, understood and respected. We are tired of explaining to white people why our lives matter, we are tired of dying, and we are tired of being ignored. African Americans have been tired since 1619, so until the world decides to acknowledge our pain, importance, and our humanity, we will continue to make noise.

When the Class of 2022’s tight-knit community was invaded, abused and taken advantage of by a private caller, Tower was quick to come up with a story, disregarding how scarring this event could have been for the black students who were the ones being called “Dirty, ugly, stupid” and a group of people that “don’t belong in the world”. There are 10 black students in the sophomore class. 10 black students out of a class of 123. So why was it that the students of color were the last ones to be reached out to in regards to a racial attack on us? Although I was extremely upset, I let it go, but this recent article is something I refuse to look past. Although it was probably coming from a place of good intent, don’t you think we feel horrified when every time we turn on our TVs we’re being murdered for wearing a hoodie, playing in the park, running, wanting to go to school, “whistling” and for just wanting to be treated equitably? Although this article sparked my anger, this is not just an issue within the Masters community. While the Masters community can and should do better, this is a worldwide issue that needs to be addressed.