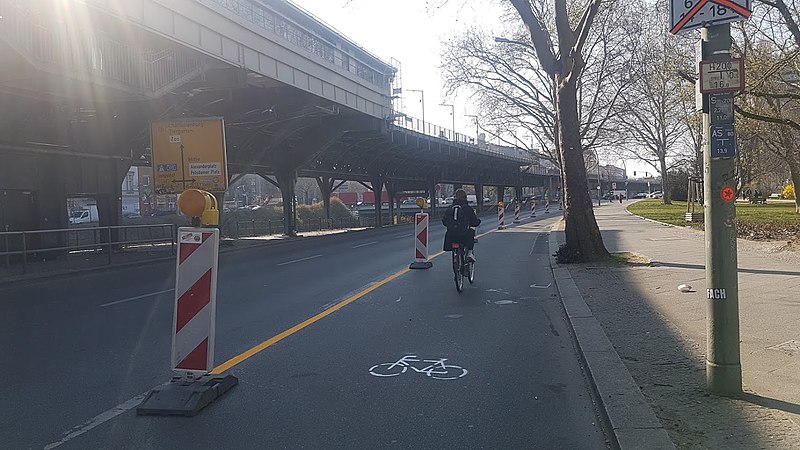 https://creativecommons.org/licenses/by-sa/4.0/ (no changes made)

Being hit relatively early by the coronavirus, many European countries have begun to ease restrictions. Restaurants are serving guests again, smaller gatherings are being allowed and, in some cases, even borders are being reopened. Without an effective treatment or a vaccine, life will not be able to come back to “normal,” though. This means that work from the “home-office” will continue and that transportation will have to adapt. In cities, there are two crucial issues that surround the methods of transit, besides, of course, the assured way of getting from one place to another: their risk of spreading the virus and their environmental effect. As buses and trains are viewed as potential virus hot spots, focus has shifted to adjusting this means of transportation. For example, Milan mayor Beppe Sala has announced that the metro will not be used at full capacity, reducing its ridership to 400 000 trips a day. Inside buses and subway cars, the floors will be marked such that riders will be able to keep the correct amount of distance from each other. In periods of particularly high metro usage, station entrances will close until the number of passengers has lowered.

Besides remodelling public transit to contain the virus, alternatives need to be presented. With the goal of reducing pollution and many European cities not being designed for large amounts of car utilization, the solutions many municipalities are turning to are biking and walking. Milan plans to assign thirty-five kilometers (twenty-one miles) formerly designed for cars to bikers and pedestrians. In Berlin, so called pop-up bike lanes, which, as the name suggests, are newly and quickly created cycling paths that do not necessitate much (or rather any) construction, have been on the rise for weeks. Eleven kilometers (six miles) of such spaces have already been built in the German capital, with plans to further expand them. Munich is imitating the concept and Paris is accelerating its planned bike lane extension. According to data from the German market research institute GfK, walking and cycling have temporarily been the most popular methods of transportation in the past two months in Germany.

A big step has been made by Brussels, sometimes considered the unofficial EU capital because of the many EU organizations having their offices there. Local officials have decided that forty kilometers (twenty-four miles) of new bikes lanes would be built. On top of that, the inner city has been declared a traffic-calmed area. It was also decided to reduce the maximum speed limit in the city to 30 kilometers (18 miles) an hour. The measures come after the European Court of Justice has ruled that air pollution in EU cities can be measured in every place, not just spots picked by local authorities. Yet, since the air pollution has been linked to higher mortality rates, the reduction of pollution is also a step towards improving public health for local residents.

With a pandemic garnering the world’s attention, a quiet revolution is taking place in European cities. The way people get around urban areas is being re-evaluated and reconstructed. Making cities environmentally-friendly, something that has long been necessary, is finally being realized. And even though some of the changes might be temporary, the transportation reforms in European municipalities are a sign of how the future of transportation might look like in cities around the world. Not just that, they are also a sign that sweeping change is possible, even on a local level.