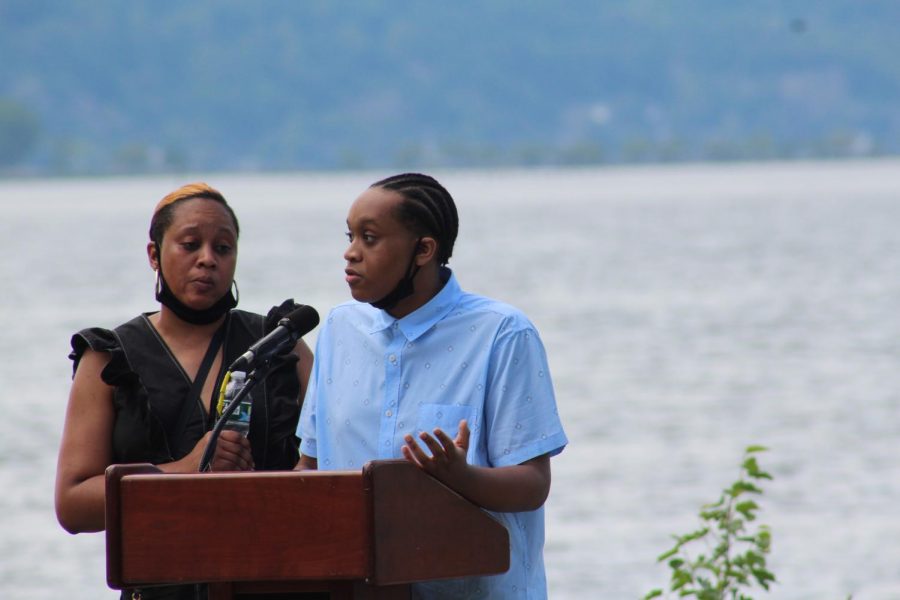 Leron Dugan '20 speaks at the Black Lives Matter rally at the Dobbs Ferry waterfront on June 4.

Hundreds gathered at the Dobbs Ferry Waterfront Park for a Black Lives Matter rally on June 4. The rally was organized in the wake of the death of George Floyd, an unarmed black man who died at the hands of former police officer Derek Chauvin in Minneapolis, Minnesota on May 25.

Becca Baron, a graduating senior from Dobbs Ferry High School and one of the event’s organizers, helped to fundraise over $2,200 for the rally’s sound system through a GoFundMe page in less than a day. The donations exceeded the original goal of $1,800, and according to the GoFundMe’s home page, all excess funds will be donated to racial justice organizations.

Attendees of the event were encouraged to follow social distancing guidelines, and to wear a mask at all times to prevent the spread of COVID-19. Extra masks were offered for free to those who needed them through the AFYA Foundation, which sources excess medical supplies from local hospitals.

Baron, in a speech to the audience, said, “We would like to recognize that safety in regards to COVID-19 is of utmost priority to myself, and the other organizers. In fact, the pandemic has been disproportionately affecting communities of color.”

There was a heavy police presence at the rally, including two police boats stationed in the Hudson River, but the Dobbs Ferry Police Department helped to organize the event, and even permitted free parking at the Dobbs Ferry Metro-North train station for rally goers, according to Baron.

The crowd was composed of a racially diverse, but majority white audience.

Stewart-Cousins told Tower, “It’s extraordinary to be in Dobbs Ferry at a Black Lives Matter rally with a predominantly white audience, who have taken the responsibility to make sure that the changes that are necessary for America to really be great start taking place. Everybody has to be involved.”

Dugan said, “It’s an amazing experience to speak and articulate my experiences to people who I assumed were indifferent.” He continued, “With everything that’s been going on with the pandemic, it’s allowed people to stop and take note of what’s going on around them. And as much as we’ve lost a lot as an American people, and as a global community, I think that it’s really good to see so many people that might be new to this kind of activism, are here and willing to listen, and learn and educate themselves.”

Zia Foxhall ‘20, who also attended the rally, was pleased with the support of non-black people, although she pointed to the majority white demographics of Westchester as another indication of systemic racism.

“I think it’s good to see white people showing up in support for black lives. I would have liked to have seen more black people, but objectively there aren’t that many black people in Westchester County. The fact that these wealthier towns just don’t have many black people is because of hundreds of years of systemic racism,” Foxhall said.

The rally concluded as Jason Brown, a Dobbs Ferry resident and local pastor, read a lengthy list of black victims of police brutality, followed by a moment of silence as the hundreds of attendees kneeled and held their fists up in solidarity with the movement.

Although the speakers lauded the crowd for their attendance numerous times throughout the event, one point which was consistently reiterated was that just attending the rally was not enough.

Stewart-Cousins made her one-word call-to-action to the younger members of the audience clear: vote.

She said, “The policies which need to be changed happen from policymakers and those people get there because people vote. So you’re taking a serious responsibility, especially now because it’s all different [with the pandemic]. It will be a different structure. So keeping the awareness, the importance and the power of the individual vote is key.”

Foxhall agreed. “This is the future that is being handed to us, and we now have the opportunity to have some sort of say in it. If you don’t vote, your voice is just unheard. If people want their opinions to become a reality, it’s necessary to show up to the primaries and show up in November and vote,” she said.

Stewart-Cousins added, “When you see racist acts, I’m not asking you to sacrifice your life, but don’t be complicit. Don’t just sit there and watch it, like those people who sat there and watched the death of George Floyd. Make an effort to make a difference.”

Additional students and faculty were reached out to for interviews on this article, but at time of publication, the above voices were the only ones that were able to be included. If you attended this rally and would like to share your experiences for Tower’s coverage, please email mitchell.fink@mastersny.org.