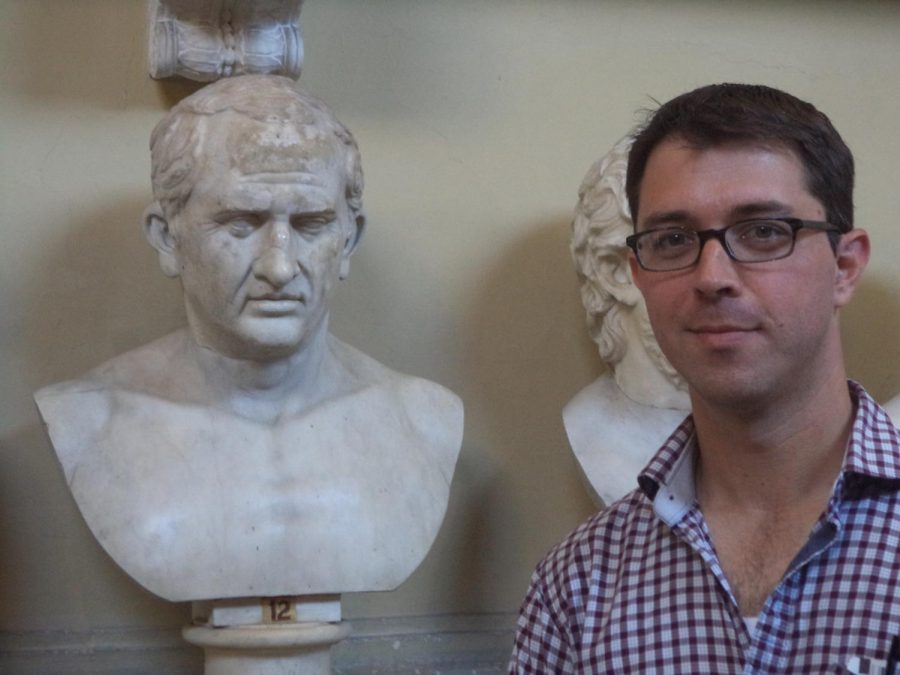 Latin teacher Keith Kitchen poses next to a statue of Cicero.

After eight years of teaching at Masters, Keith Kitchen, the Middle School Latin and Upper School Greek Teacher, is leaving the school. Next year, Kitchen plans on moving back to his home state of Pennsylvania and teaching at a private school there.

“I had a lot of freedom to make my curriculum here at Masters,” Kitchen said “I changed it constantly, and I wasn’t bound by anything. And I’m a Middle School teacher predominantly, but a couple years ago I started teaching in the high school as well. I was even teaching kids that I taught in Middle School as juniors and seniors. I could do the fun part of teaching middle school because there’s so much energy, but I could also step into the high school and ramp up the difficulty and the intellectual side of classes. That flexibility was my favorite part [of teaching at Masters].”

According to his former students,  Kitchen’s classes were always different and fun. From unique and captivating projects to stories about his studies abroad, his classes were about the students being able to walk away having learned something new in a fun way.

Owen Pietsch, a senior, said, “There was one time where he gave everyone a project to build or make plans for a Roman style villa, and 90% of everyone chose to do it in Minecraft, because he gave us that option.”

Annie Fabian, a sophomore who took Kitchen’s Latin class for three years in Middle School, said, “He’s definitely what made me like Latin. I’ve had other Latin teachers before him and I’ve learned that it’s not always the most interesting language to study, but he made it seem really fun. He’s pushed me to continue with my pursuit of education in Latin, so he definitely is what sparked my love of the language.”

Chair of the Department of Modern and Classical Languages, Richard Simon said, “Every single thing about how he relates to his students just makes it clear to them that he loves them to pieces and that he is deeply committed to their learning experiences. And he wants them to find the joy in learning, and learning Latin. He is an amazing teacher, and it’s a loss for us.”