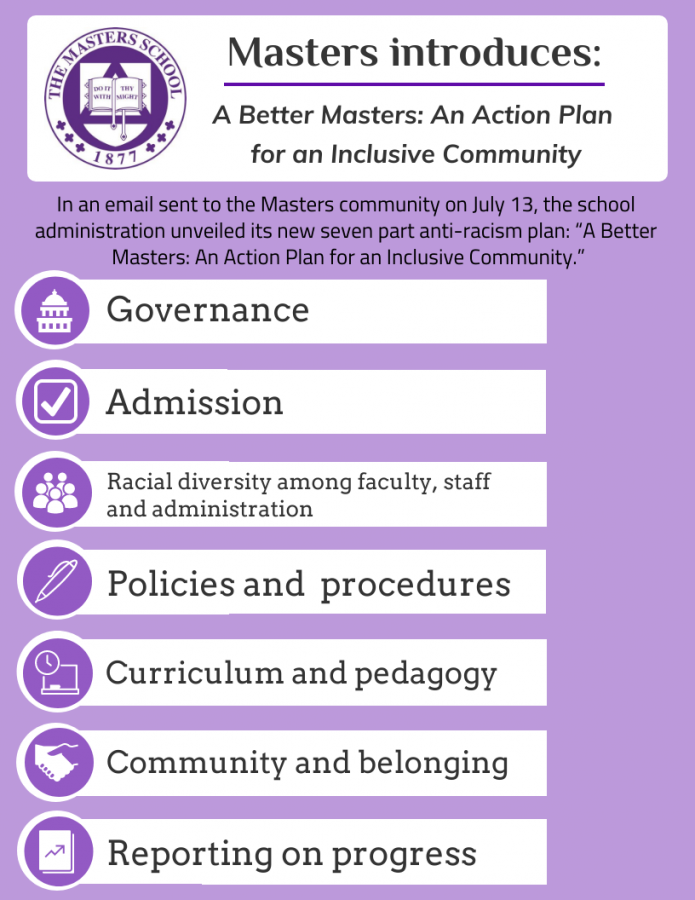 On July 13, The Masters school released "A Better Masters: An Action Plan for a more Inclusive Community".

In an email sent to the Masters community on July 13, the school unveiled its new anti-racism plan: “A Better Masters: An Action Plan for an Inclusive Community.”

The plan was signed by Head of School Laura Danforth, Chair of the Board of Trustees Edith Chapin, and Director of Equity and Inclusion Karen Brown, and is made up of seven sections:

In her video message, Danforth described the plan as “a formal declaration of the Masters School’s commitment to become the community we promised students and families they have joined.”

The announcement of the plan comes on the heels of the @blackattms Instagram account, where Masters students, alums, faculty and staff of color shared their experiences as people of color in the community.

Danforth said in her video, “I believed that we were walking the walk, and not just talking the talk. I have come to understand that too often I have seen what I hoped was true. Removing my rose-colored glasses about our school, and thus about the limitations about my own leadership, my own perception has been tremendously painful.”

The plan creates change starting at the top, by committing to the establishment of a Diversity, Equity and Inclusion taskforce on the Board of Trustees, and to having a Board diversification plan in place by spring 2021.

It also announces that the school will hire an Associate Director of Equity and Inclusion, to work under Brown.

Six action steps to reform the school’s curriculum are also outlined in the email, including the implementation of an anti-bias curriculum for grades 5-12, which will be developed throughout the 2020-2021 school year, and required professional development for faculty “around issues of racism and other factors impacting equity and inclusion.”

Community-wide steps outlined in the plan include a diversity taskforce, made up of various members of the community, a counselor of color in the Wellness Center and an online name bank for students to submit an audio recording of their names, in order to help community members correctly pronounce each other’s names. In addition, the plan includes required anti-racism, anti-bias and anti-discrimination training for all students; parents will also be encouraged to participate.

Rising junior Maddy Blake is a co-founder of Students of Color Empowering Excellence Mentorship, a newly formed mentorship program for students of color at Masters. She said that the training is a key part of the plan, particularly the parental involvement.

“I do think that parent training is a really good idea, and it’s really important,” Blake said. She continued, “Kids learn from their parents, and when the parents don’t know, we can’t expect the kids to know. They’re the people we spend our everyday lives with, so while we can help alter [other students’] opinions, it also helps when you can alter the opinions of the people they live with.”

“It’s one thing to learn about [anti-racism] in a classroom setting, where it can be nerve- racking to fully speak your mind about issues with peers, but to have that training made for parents so that learning can happen in a family setting is really important,” Hudson said.

In her video message, Danforth said, “We cannot be fully in our power as powers for good in the world without our policies being anti-racist. This needs to be in the center of our work, and how we learn, and how we treat one another. As has become starkly apparent, anything less makes us become complicit in structural racism that so persistently and insistently conspires against people of color, and Black people in particular.”

Hudson said she was “really impressed” with how thorough the administration was with the plan, and Blake echoed a similar sentiment.

“I liked the plan. It was evident that they [administration] took their time with it. It’s very thorough and specific… there are specific dates, which show they believe there needs to be a change, that there will be a change, and when that change will happen,” Blake said.

Aideyan said, “I thought it was fine, but I wasn’t jumping for joy or anything. It’s all about what they’re going to do moving forward. Is it going to be enacted, are we actually going to see it? Is it actually going to make change?”

Aideyan noted that there will be room for the plan to grow and become more specific over time, but said she was frustrated with the lack of specificity on some fronts, such as the future of diversity in the student body, or how disciplinary action will be taken against racist incidents.

Aideyan is a member of the Masters Black Alumni Network, which was founded by Nina Hylton ‘17 in June 2020, and is run by Black alumni of the school. The network suggested numerous potential steps for the school to implement, and according to Aideyan, some made it into the plan, and some didn’t.

The network, she said, had suggested to the administration that a counselor of color be hired in the wellness center, which did become a facet of the school’s plan.

Other suggestions, such as a Black studies course, were not explicitly outlined in the plan, although a commitment to curriculum reform was addressed.

However, top administrators stand behind the plan, maintaining that it will create tangible change at Masters.