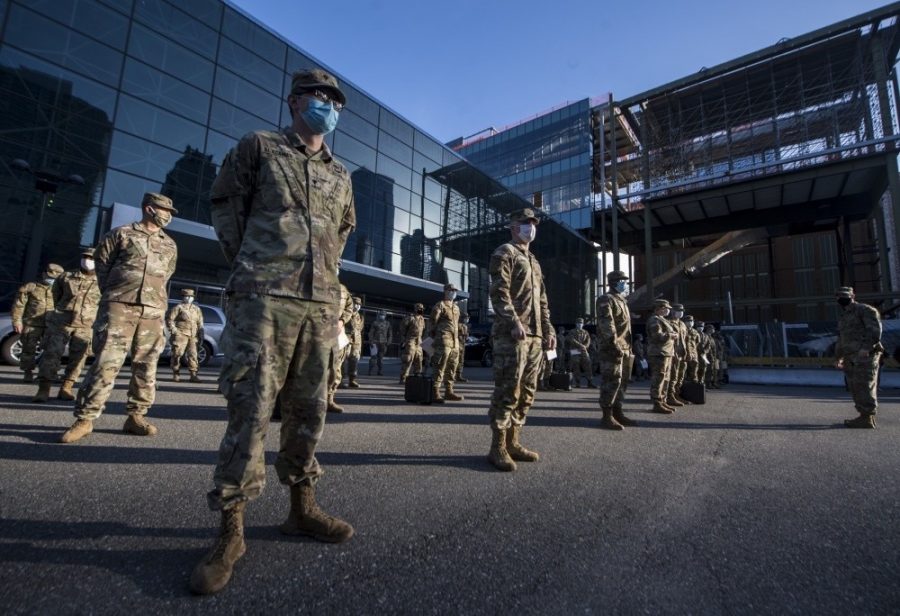 Soldiers stand socially distanced and masked in front of the Javits Center in New York City, which the Army turned into a hospital for the COVID-19 pandemic in early April.

The last time the U.S. faced a disease as contagious as COVID-19 was the Spanish flu pandemic of 1918, while military troops were battling in World War I. Over 100,000 American troops lost their lives in that war, around 45,000 of those from the influenza (i.e. Spanish flu). Now, 102 years later, many American troops stationed at home and around the world are suffering from the effects of COVID-19, and those who are called upon are providing aid to COVID-19 patients.

As of Aug. 17, 34,090 U.S. troops have been infected with COVID-19 – 533 have been hospitalized, and four have died, according to the U.S. Department of Defense (DoD). The military infection rate is currently just over 1% and the DoD is performing 60,000 tests per week. According to an article in Air Force One magazine published on May 5, the U.S. military instituted a four-tier testing plan prioritizing “key strategic and homeland defense personnel, followed by troops in the combat zone, those deployed or returning, and lastly other forces.”

Initially, the DoD barred people who overcame COVID-19 from enlisting in the armed forces, but that policy was rescinded in mid-May. The current protocol is to look at each recruit on a case-by-case basis; however, “If there are any indications that a recruit hasn’t fully cleared the virus or is still suffering from complications, they could be prevented from moving on to initial entry training,” Matthew Donovan, defense under secretary for personnel and readiness said, as reported by the Military Times.

Masters alum, Jake Masters ‘18, is currently an infantry mortarman in the U.S. Army stationed at the 10th Mountain Division at Fort Drum, located in New York. He is scheduled to be deployed this November.

Masters said he feels comfortable with the precautions that the Army has taken in response to the virus.

He said, “Within our group of guys I’m with everyday, we quarantine within our own group. They’re very cautious about us staying together and not mixing with other groups of soldiers. Besides soldiers and immediate families, no one else can enter the base; it’s a very insular community.”

At Masters’ base, the soldiers are required to wear masks and social distance in “high-traffic” areas – for example, when going to the dining facility. However, Masters said that social-distancing during training within his own unit is not practical.

Masters does not know any service members who have tested positive for COVID-19, but he said that if someone were to test positive there would be a minimum two weeks of quarantine and the soldier would be immediately transferred into a separate, isolated building. Once the soldier completes his or her quarantine, is fever-free, and tests negative multiple times, there is a “reintegration process,” which requires that soldier’s whole unit to be tested as well, he said.

In early March, the USS Roosevelt, a naval aircraft carrier stationed in Guam, was hit with an outbreak of the novel coronavirus. More than 1,000 sailors were infected with the virus, making it “the most extensive and concentrated spread” (NBC San Diego) of COVID-19 within the U.S. military. USS Roosevelt Captain Crozier sent an email to his commanders letting them know that the sailors would need to evacuate the ship in Guam so that they could spread out to quarantine and those who were infected could be treated; the email was leaked to the media as well as “his plea for help, begging for faster action to protect the crew” as reported by NBC San Diego. While Crozier was trying to take the necessary steps in order to deal with the unforeseen situation, it was announced in mid-June that Navy leaders would not reinstate Crozier as the commander of the USS Roosevelt. Chief of Naval Operations Admiral Mike Gilday deemed that Crozier’s efforts, “exercised questionable judgment.” Crozier was fired by then-acting Navy Secretary Thomas Modly, who later stepped down over remarks he made to the ships’ crew criticizing the captain’s actions, according to Politico.

On March 2, the second confirmed coronavirus case in New York appeared in New Rochelle. In response to the quickly emerging COVID-19 outbreak in the area, schools were shut down, and 10 days later New York Governor Andrew Cuomo sent around 270 members of the National Guard to New Rochelle in order to contain the city. The soldiers could not restrict the residents’ movements, for things such as “enforcing quarantine orders or the one-mile containment zone” (Spectrum News), but were sent to help sanitize public spaces and distribute food to those in need living in the contained area. The food, provided by Feeding Westchester, was distributed to “families that rely on free or reduced breakfast and lunch for their children” (LoHud.)

The early use of the military in New Rochelle and good work on behalf of the citizens of New York and Westchester County, helped to contain the virus, in part, due to the assistance that the National Guard provided. This was confirmed by comments from New Rochelle Mayor Noam Bramson and New York Governor Andrew Cuomo.

“The data are sufficient to demonstrate that New Rochelle is declining as a percentage of confirmed cases in Westchester (County), which indicates that our early quarantine and social distancing measures have been effective” (CNN) Bramson said.

On March 21, Cuomo said, “You see the Westchester number is slowing. We did a New Rochelle containment area. The numbers would suggest that that has been helpful” (CNN).

U.S.N.S. Comfort, one of the U.S. Navy hospital ships, was involved in the COVID-19 recovery effort. On March 30, the 1,000-bed U.S.N.S. Comfort docked in New York City, but before departing after just one month only treated 182 patients, approximately 70% of which had COVID-19, according to Captain Patrick Amersbach, commanding officer of the Comfort’s Medical Treatment Facility. At first, the ship was only treating those with emergency surgeries (not COVID-19 related) in order to open hospital emergency room beds, which were at full capacity, for COVID-19 patients. That rule was later lifted.

In early April, the Army Corps of Engineers constructed a hospital inside of the Javits Center in New York City. There were 2,500 beds stationed in the hospital, however, just over 1,000 patients were treated before the facility was closed.

The U.S.N.S. Comfort and the Javits Center ultimately did not use all of the available space for multiple reasons: 1) hospitals added more beds in response to an order by Governor Andrew Cuomo, which slowed the Comfort’s and Javits Center’s admissions, 2) patients and doctors were not aware of what treatment was available aboard the Comfort and inside of the Javits Center, and 3) many of those that were hospitalized could not be moved due to their impaired health, according to NPR reporter Rebecca Hersher.

As COVID-19 surges in states like Arizona, California, Florida, Georgia, and Texas, more hospitals are in desperate need of space and staff. In mid-July, the U.S. military sent 740 medical staff to hospitals in California and Texas.

On Aug. 3, “More than 24,900 Air and Army National Guard members were deployed in 50 states, three territories, and the District of Columbia” (Military.com) to provide COVID-19 related support.

The U.S. military has been critically involved with providing assistance and treatment  associated with the pandemic, while also trying to contain and prevent their own outbreaks.