Actor falsely claimed Trump tweet criticizing Democrats for omitting "under God" from pledge during DNC was a "blatant lie." 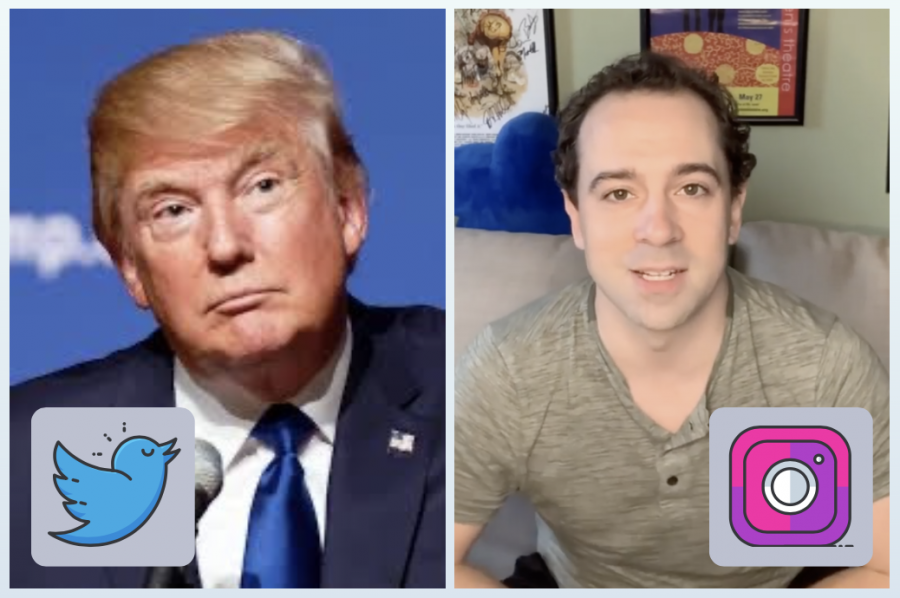 Actor Rob McClure accused President Donald Trump of lying after the president tweeted this past weekend about the Democrats omitting the words "under God" from the Pledge of Allegiance during the Democratic National Convention. While "under God" was included in the recitations of the pledge during the central programming of the convention, it was left out during at least two meetings prior to the prime-time coverage.

Misinformation doesn’t just stem from the president. It’s all over social media.

Early Monday morning I was on Instagram and came across a story post of a former classmate. It was a repost of a tweet by President Donald Trump from Saturday which said, “The Democrats took the word GOD out of the Pledge of Allegiance at the Democratic National Convention. At first I thought they made a mistake, but it wasn’t. It was done on purpose.”

The Democrats took the word GOD out of the Pledge of Allegiance at the Democrat National Convention. At first I thought they made a mistake, but it wasn’t. It was done on purpose. Remember Evangelical Christians, and ALL, this is where they are coming from-it’s done. Vote Nov 3!

Above the tweet my former classmate had written, “I’m at a complete loss of words regarding how this man can just pull things out of his a** like a rabbit out of a hat.”

Although the President is regularly criticized, this accusation caught my eye. Unfamiliar with the controversy surrounding the tweet and curious to learn what had prompted such a response, I clicked on the post.

I was redirected to a post by @mcclurerob, the Instagram account for Rob McClure. McClure is an American actor – or as his Instagram bio reads, a “Professional Make-Believer.” The post by McClure showed the President’s tweet about the Pledge of Allegiance and a caption which reads, “To my Trump supporting friends and family, do you care about how much Trump lies to you? He lies to you every single day in plain sight. He tweeted this blatant lie this morning and it took me about 6 minutes to throw a fact check together in iMovie (Swipe to see the truth). And yet, thousands of his supporters believe him. He thinks you’re too lazy to fact check him. Don’t prove him right on a daily basis. Please. You’re better than this. #bidenharris2020 #dumptrump.”

To my Trump supporting friends and family, Do you care about how much Trump lies to you? He lies to you every single day in plain sight. He tweeted this blatant lie this morning and it took me about 6 minutes to throw a fact check together in iMovie. (Swipe to see the truth). And yet, thousands of his supporters believe him. He thinks you’re too lazy to fact check him. Don’t prove him right on a daily basis. Please. You’re better than this. #bidenharris2020 #dumptrump

When I swiped to McClure’s video, I saw a clip of Democratic presidential nominee Joe Biden’s grandchildren reciting the Pledge of Allegiance on the first night of the Democratic National Convention (DNC) last week, followed by the recitations of the pledge from the other three nights of the convention. Each time, the words “under God” were included in the pledge, supporting McClure’s accusation that Trump’s tweet was inaccurate.

But the six-minute factcheck in iMovie was not enough. After doing some fact-checking of my own, I realized that it was McClure who was misrepresenting the truth this time – not Trump – before his 64.7 thousand followers, through a post that was liked by over 11 thousand people .

According to the Associated Press, “The central programming of the convention featured the entire pledge, complete with ‘under God.’” Key words: central programming. While the DNC was broadcasted on the major news networks during prime-time, when many of the speeches from the top politicians occurred, the convention is packed with meetings that occur throughout the days – all of which are live streamed on the DNC website.

What McClure’s iMovie fact-check failed to include was a review of the live streamed programming. During two events before the evening speeches began, the Muslim Delegates and Allies Assembly and the LGBTQ Caucus meetings left out “under God,” from the pledge, according to the Associated Press. And, as Trump said, it’s clear that the words were intentionally omitted. Watch the video.

While Trump’s tweet was somewhat misleading, especially coming from someone who frequently promotes baseless claims, it wasn’t a “blatant lie”, as characterized by McClure.

I took it upon myself to make him aware of his mistake. I sent him a direct message and included a quote from the Associated Press article explaining the instances where the phrase “under God” was omitted from the pledge during the DNC. A few hours later, McClure blocked my account – the account of a high school journalist who fact-checked the improper “fact-check” of an actor with 64.7 thousand followers.

But my takeaway from this anecdote is not that Trump was right and McClure was at fault, and sharing this experience doesn’t mean I support the President’s tweets and willingly defend them. Instead, this instance proves that social media is a very dangerous place from which to get information.

Anyone – from a beloved celebrity, to one’s closest friends – can post inaccurate claims on social media and get away with them. Misinformation is then spread to thousands of followers, who spread it to their friends, and so on. Think about all the people now who have the wrong impression on Trump’s tweet because of this.

Rather than resorting to Instagram or Twitter for the hot political take, it is best to rely on down-the-middle news sources such as the Associated Press to find information and verify the statements of others. We are all obligated to fact-check one another and preserve the truth, regardless of political bias.

To be clear: Trump’s social media and Trump himself are no exception. The president lies all the time – from his false claim that 99% of COVID-19 cases are totally harmless to accusing former President Obama and Biden of spying on his 2016 election campaign. There’s no doubt that Trump’s promotion of disinformation and conspiracy theories is inappropriate coming from the office of the president of the United States. But just because the President lies often does not mean we should assume every word he utters or every tweet he posts is false. One must wait to be critical until all the facts are uncovered.

Note: The phrase “under God” was added to in the Pledge of Allegiance in 1954 and has since been debated on many fronts. To read more about the controversy click here.

This is an editorial by Logan Schiciano and does not represent the views of the entire Tower staff.