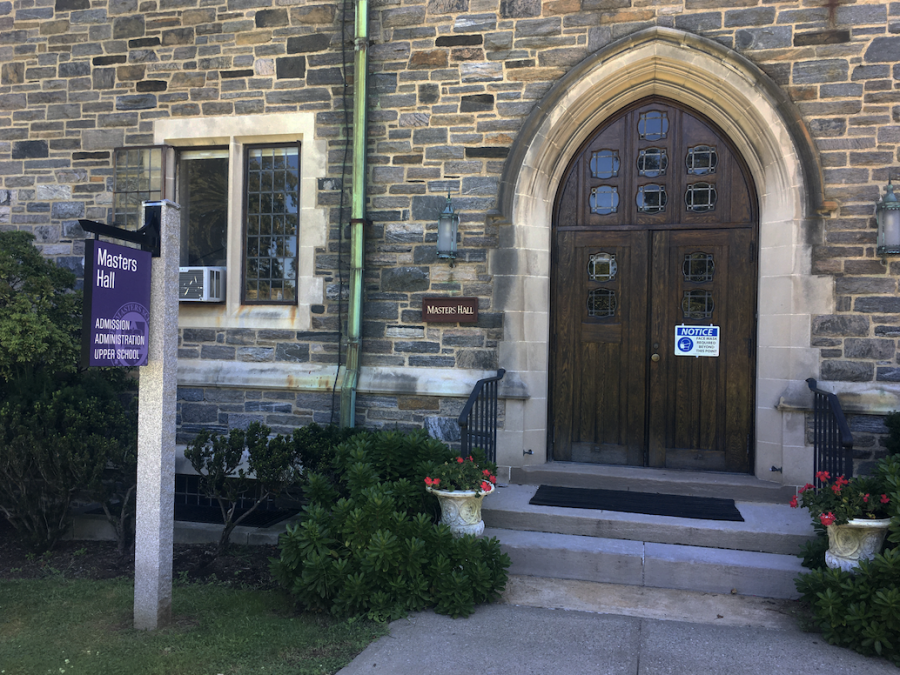 The front door of Masters Hall will remain closed for the start of the 2020-2021 school year as students will be learning remotely for at least the month of September. Members of the Masters community have mixed reactions to the school's decision to begin online.

With the first day of classes just days away, students and faculty at The Masters School have varying opinions on Head of School Laura Danforth’s decision to return to remote teaching and learning for at least the month of September.

Danforth detailed the school’s reentry plans, which she said were made in consultation with medical experts (many of whom are Masters’ parents or on the Board of Trustees), in two subsequent emails delivered on July 24 and Aug. 10. The July 24 email cited numerous warnings from many in the scientific community, as well as the spike in cases in areas around the country at the time, as reasons behind the school’s decision to start online.

While New York has had a COVID-19 positivity rate under 1% for nearly a month and New York governor Andrew Cuomo recently announced that schools in New York could reopen in-person following strict health protocols, the White House coronavirus taskforce coordinator Dr. Deborah Birx, warned last month that the coronavirus is still “extraordinarily widespread,” fueling the debate as to whether or not it is safe to return to the classroom.

Department of Visual Arts Chair Cheryl Hajjar said she “started crying tears of joy and relief” when she received the news regarding Masters’ decision to begin the year remotely.

“This is really scary terrain and rolling the dice is not a good idea,” she said. “I feel very strongly that taking risks with any life is completely against my being. I’m just not comfortable with the idea of us all going back into school at this time.”

“I don’t question the decision, but my initial reaction was definitely disappointment,” he said. “Especially with the numbers being down in our area, I I had hoped that going back in-person would be the pay-off for having worked really hard as a region to flatten the curve.”

While colleges and other educational institutions across the country have reopened for in-person learning this fall, several have had to change course after clusters of the coronavirus have developed on campuses. The University of South Carolina has already reported over 1,000 cases of COVID-19 after being open for just two weeks; others, including University of North Carolina Chapel Hill and Colorado College, have shifted to online learning after outbreaks among their respective student bodies.

Hajjar fears that a situation like this at Masters could be detrimental.

“More damage will be done if we open prematurely and end up having to close again,” she said. “That will catch us off guard and have more repercussions on the emotions of students.”

She said that having the advanced notice of the school’s remote start played into her and other Masters teachers’ favor, allowing them to spend hours doing professional development – a luxury they did not have in the spring – geared towards delivering an enhanced online experience.

Health experts generally agree that children, especially those under the age of 10, are at a lower risk of getting seriously ill from COVID-19, though it remains unclear to what extent they contribute to the asymptomatic spread of the disease – potentially posing a threat to adults and individuals with underlying conditions.

While local private institutions like Hackley School in Tarrytown, N.Y. and St. Luke’s School in New Canaan, Conn. have returned for full in-person learning and public school districts in Westchester such as Pleasantville and Chappaqua have outlined hybrid methods – which bring students to the classroom at least a couple days a week – several teachers noted that a return for in-person learning at Masters is potentially riskier and drastically different than other local schools, given the diverse geographical makeup of the student body.

West said, “In my own life, I often would rather take a risk rather than overplay caution. But when it comes to our school with families in all kinds of situations from all over the world, I don’t think it makes sense.”

Danforth told Tower, “Reopening schools is one big experiment… and it’s not an experiment I want our school to be a part of.”

Jane Rechtman Faculty Chair Curt Ebersole said that a hasty return – before it is considered safe by the community as a whole – would be filled with logistical and psychological obstacles that might impede the learning experience.

Danforth said that the delay in in-person instruction “allows [Masters] to focus on delivering a strong remote learning program with consistent and predictable schedules for students in both divisions and in both our day and boarding programs while we observe the health impact of schools reopening in our region.”

Ebersole and other teachers lauded Danforth for her approach. They noted that Danforth was also one of the first heads of school to shut down in March – a decision considered by some to be overly-cautious and perhaps unnecessary at the time, but one which saved many unpleasantries in retrospect, Ebersole said.

Senior Class President Zach Battleman believes it’s improper to be critical of the decision to start remotely before observing the outcome in the surrounding area.

He said, “It would really be unfortunate if all the schools opened up everything was fine and we missed out on it. But the alternative is: schools in our area who chose to reopen have COVID-19 outbreaks and have to shut down. If that were to happen, we will probably thank Ms. Danforth and say, ‘That was a really smart decision to keep our school closed.’”

Battleman sympathizes with students who are frustrated to be missing various start-of-the-year activities, including in-person athletic preseason, senior traditions and reuniting with friends., but said it’s important to maintain perspective on the situation.

At the same time, students have expressed discomfort with beginning a new year with new classmates and teachers virtually. Junior Camille Smith worries that the remote start will hinder student-teacher connections.

“It’s hard for me to make a good first impression over a screen,” she said.

Masters is offering an in-person orientation for new students on Sept. 8 and optional on-campus grade gatherings once a week throughout the first month of school, but it is not guaranteed that a students’ current academic teachers will be present at that student’s grade events.

For senior Kristie Sears, a member of Cole Dorm, the rationale behind the cautious approach does not extinguish the shock and sadness she felt when she initially heard the news.

“It was full-on heartbreak. Being a boarder has made Masters my home, so knowing that I won’t be able to go back broke something in me.”

Boarders who live far from Masters will likely be unable to attend the September on-campus gatherings and adding to Sears’ frustration, Danforth’s July 24 email said that an eventual reentry will be phased in with day students returning to campus first and that throughout this time, the dorms will remain closed.

“It [the rhetoric of the email] makes boarders feel they have been put on the ‘back burner’ and to be truthful, I feel the way they approached boarding was wrong,” she said, adding that she believes boarders’ return to campus isn’t as complicated as it may seem. “With day students it’s hard to regulate what they do after they step off of the Masters campus; with boarders, however, you can regulate where we can go and what we do.”

Danforth told Tower the school is taking steps to make sure boarders don’t feel alienated, including meeting with boarding families and putting an emphasis on developing an equitable program for students learning from overseas; though, she defended her decision with regard to boarding by mentioning various boarding schools which have chosen to essentially quarantine students and are now struggling and dealing with some attrition, according to Danforth.

A decision as to whether students could return to campus for in-person instruction after September has not yet been made by the administration, but will be communicated to students and their families no later than Sept. 30, according to Danforth’s Aug. 10 email. She also said the conclusion will be informed by a variety of factors including the success of school reopenings in the area, input from local health authorities, and assurance of a decline in COVID-19 cases for at least 14 days leading up to the school’s intended reentry date.

Even if it is deemed safe to reopen after September and the necessary precautions are taken at Masters, Ebersole fears students may be reckless when they are off campus.

He said, “Just having a get-together with friends is like a petri dish. And then students may come back to school and unknowingly spread the virus to others.”

The incubation period for COVID-19 is typically between 5-6 days and can be up to 14 days according to the World Health Organization.

Several teachers said they would prefer to wait until there is an effective vaccine before returning to the classroom, but Dr. John Swartzberg, a clinical professor emeritus at the University of California Berkeley, told Tower that even if a vaccine is developed before the end of the calendar year, there are many obstacles that stand in the way.

“We probably need a minimum of 4 billion people to be vaccinated on this planet for it to be effective,” he said.

This may be problematic considering 35% of Americans said they would not be willing to take an FDA-approved COVID-19 vaccination, according to a recent survey from Gallup.

Swartzberg added that it may take months before students can receive a dosage.

“First, healthcare and emergency workers will get the vaccine; then, people at high-risk including elders or those with underlying conditions will get it,” he said. “It will probably many months before young people will be able to get vaccinated – if everything goes well, it could be around [next summer] when high schoolers would be next in line to get the vaccine.”

Many students, including Sears, don’t feel it’s necessary to wait that long.

“I would feel totally fine coming back and actually living in the dorms now because, at the end of the day, I want my senior year to be in the dorms with my girls making the memories that I’d look back on fondly.”

But Colleen Roche, a teacher in the history and religion department, pointed out that an eventual in-person experience will be very different from what many students are envisioning. `

“We won’t be sitting around Harkness tables – we’ll be sitting in rows. We won’t be hanging out on the quad with our friends. We won’t be going back to Masters as we know it until we have this virus under control,” Roche said.

In anticipation of every possible scenario, Ebersole said he is designing flexible curricula for his courses – string ensemble, chamber music and public speaking.

“I’m preparing my lesson plans for a ‘flipped classroom’ atmosphere, where course content is delivered via shared presentations, pre-recorded videos, and integrated student activities, freeing me to use class time for individual questions and connecting more personally with each student. This sets up a unique experience for each class, and also allows for flexibility in online, blended cohort, and all in-person situations.”

Roche, who also has two children attending Masters, urges students to embrace the fluidity of the situation.

“As much as we might wish things were different right now, they’re not. Going to school online is not a fatal condition. COVID-19 can be fatal,” she said.

If you have thoughts on the school’s reentry decisions and would be interested in sharing them with Tower please contact Logan Schiciano at logan.schiciano@mastersny.org