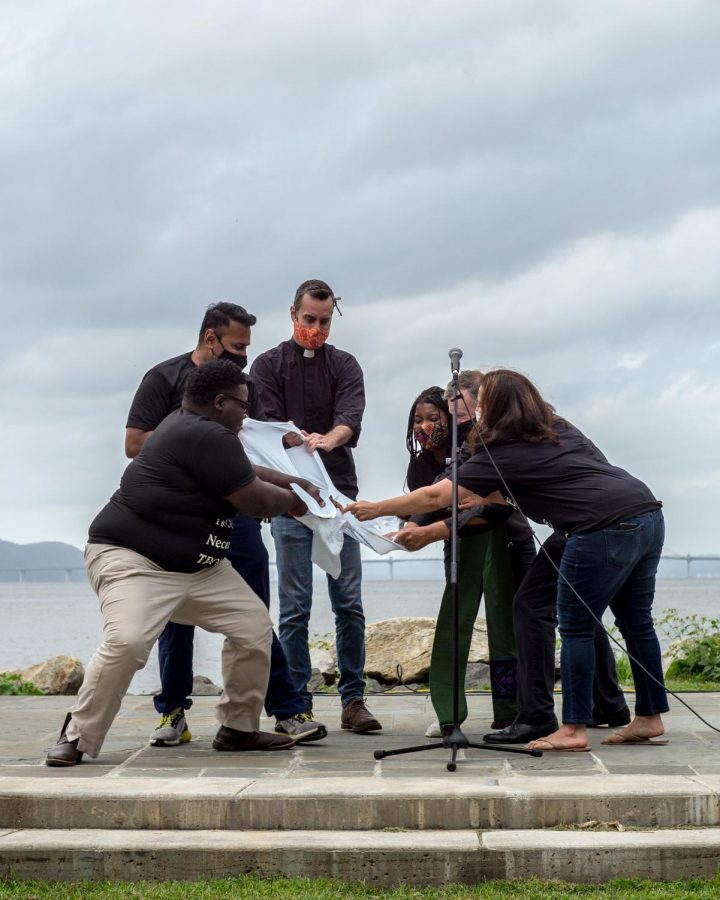 Speakers at a local Black Lives Matter rally ceremonially ripped up a t-shirt that used rhetoric described as "racial intimidation".

T-shirts were left on the doorsteps of Black and Asian residents of the village on Sept. 7, telling families in all-caps text to go back to where they came from and to not “make here like there”.

The t-shirt, with, “Welcome to Dobbs Ferry” printed on the front, read, “We simply like here the way it is and many of us were actually born here and stayed because it is not like there,” despite claiming, “We are not racist, phobic, or anti whatever-you-are.”

Images of the t-shirts circulated on social media, with many current and former Dobbs Ferry residents expressing their frustration and hurt in regard to the language on the shirts, which contains rhetoric that is described as “racial intimidation” by Dr. Nitin Gupta, a local resident who works at Rivertowns Pediatrics.

Mayor Vincent Rossillo sent a village newsletter the following morning to address the shirts, saying “Although the intent of the message on the tee shirt is unclear, it has offended people and created tension and divisiveness in our community.” Additionally, he wrote, “The Village is undergoing a natural transformation both physically and culturally. These changes can be difficult for some to accept, however, I believe they will ultimately make us stronger and better prepared to address the future.”

Rossillo added that the chief of police was investigating the situation, and that if anyone had firsthand information, they should contact the Dobbs Ferry Police Department.

In response to the incident, which left people of color in Dobbs Ferry feeling unsafe, according to personal testimonies left on social media, an anti-racist rally was held at the waterfront on Sept. 15. Among those who spoke at and organized the rally included State Senate Majority Leader Andrea Stewart-Cousins, who attended a previous Black Lives Matter rally in Dobbs Ferry, Reverend Andrew Paton of South Presbyterian Church, pediatrician Gupta, Tanesha Grant from United for Black Lives and Mayor Rossillo. At the rally, one of the t-shirts was ceremonially ripped.

On his public Facebook page, Gupta said, “Privilege is failing to understand why this t-shirt is racist and discriminatory. As a person of color, people have told my family and me to go back to where we came from throughout my life. I’m tired of being told that I don’t belong here. I’m not leaving. I belong here.”

Mayor Rossillo is setting up a “Human Rights and Diversity Committee” composed of residents to study and address racial issues in Dobbs Ferry, according to a newsletter sent on Sept. 14 by the Board of Trustees.

The newsletter read, “We are very disappointed that members of our community would create, share, or support the divisive and racist language on this shirt. We are all already experiencing such great stress, loss, and fear from all that has happened this year… Your Dobbs Ferry government has been and will continue to be committed to justice and racial equality, and to maintaining a village where all our residents feel safe and included. We will listen, we will take appropriate action; we are here to serve you.”

The Dobbs Ferry Police Department told Tower that no formal complaints have been filed regarding the incident and that an investigation will not be launched until this has occurred.