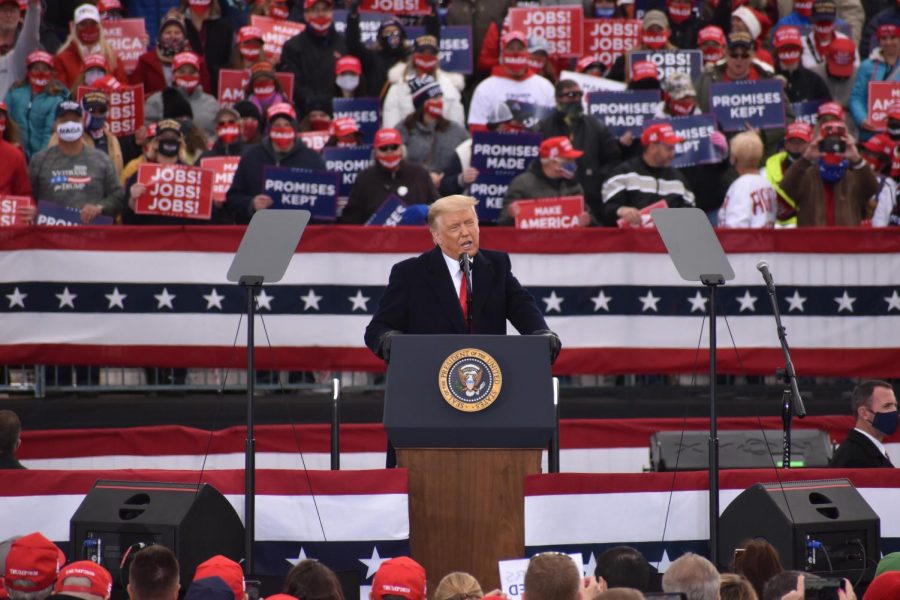 President Donald Trump addresses a crowd of thousands of supporters at a Make America Great Again Rally on Oct. 31. The stop in Reading, Pennsylvania was one of four Trump made across the commonwealth on Saturday as he looks to make a final push for reelection. Tower's Logan Schiciano and contributor Hanna Schiciano attended the rally as journalists and spoke with supporters on the presidents first-term successes and hopes for a potential second term.

President Trump stopped in Reading, Pennsylvania to hold a Make America Great Again Rally, part of a three-day, 14 rally sprint to the finish in his bid for reelection.

A crowd of roughly 10,000 people, according to a Secret Service agent, began gathering outside Reading Regional Airport in sub-freezing temperatures shortly before 7 a.m. for the event, which began after noon.

In his 60 minute speech, Trump denounced the Biden/Harris plan to phase out fossil fuels, specifically fracking, and criticized the Supreme Court’s decision to allow mail-in ballots to be counted up to three days after Election Day in Pennsylvania. He also showed a video highlighting former Vice President Joe Biden’s gaffes along the campaign trail and continued to promote false claims on the coronavirus and conspiracies about Biden’s son Hunter.

TBN producer Logan Schiciano and his sister, contributing photojournalist Hanna Schiciano, attended the event to speak with Trump supporters and listen to their views (watch video above).

“We have a true leader in the White House,” said rally attendee David App. “He’s bought us freedom, our values back – religion. He puts America first and gets things done for our country.”

Supporters echoed Trump’s concerns with regard to Biden’s energy plan and said that a ban on fracking would be detrimental to the Pennsylvania economy.

Mary, a Macungie, PA resident said, “My children need to be able to support themselves and be financially independent and we’re not going to get that with a Biden presidency. We don’t need socialism in this country.”

Most attendees chose not to wear masks nor did they maintain social distance, and despite a record high in daily cases of COVID-19 in the U.S. on Friday, supporters downplayed the virus and spread misinformation about the effectiveness of face coverings.

App said, “It’s like the flu but more deadly. I believe in God and if you get sick, you get sick. We can’t live scared. You can’t close the country down.”

“Even scientists themselves have said wearing masks does not stop the spread of the coronavirus,” attendee Shaun Hack said. “They end up being like a sign of the Democrat party to silence America – just a symbol against the freedoms we all love and enjoy every single day.”

However, a recent study from the University of Washington said that if universal mask wearing were implemented, 130,000 deaths from the coronavirus could be prevented.