The tables have turned

Exploring the impact of socially-distanced classrooms on the Harkness method 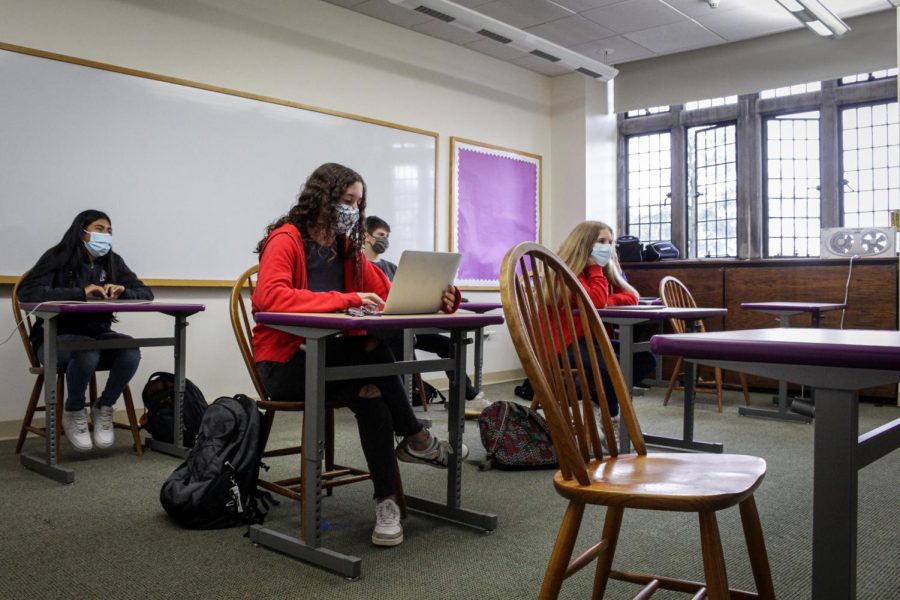 Students sit in rows as they participate in a hybrid class. The desks which now occupy classrooms were a replacement for Harkness tables, which helped to facilitate the school's emphasis on discussion-based learning.

When Masters made the switch to remote learning last spring, the Harkness table–the oval-shaped table on which the school has staked its educational identity –was left in the dust. Nearly two months into the following school year, there is no timetable for its return.

The effects of its absence are visible, particularly for courses in the humanities, which rely heavily upon the discussion-based method of learning in their classes. Students and teachers alike have had to quickly adapt to virtual forms of discussion, or in some cases a sharp increase in asynchronous work, during classes which would typically entail class-length discussions around a Harkness table. Even in partially in-person courses, Harkness tables have been replaced with rows of desks, in order to adhere to social distancing guidelines.

A quarter-century around the oval

Harkness was first introduced to Masters nearly 25 years ago. Its implementation was part of Masters’ 1996 rebranding, which included the decision to become co-ed, and the launch of the now-defunct CityTerm program.

The discussion-based style of learning received its namesake from Edward Harkness, the renowned philanthropist and oil tycoon who developed it. Harkness was first introduced to  Phillips Exeter Academy in Exeter, N.H. in 1930.

Soon after, Exeter switched out desks for oval-shaped tables, and became the first school to adopt the method. Today, Exeter is widely considered the birthplace of the Harkness style of learning.

According to a Professional Development report written by former Masters English teacher Gina Apostol in 2006, Masters was directly influenced by Exeter in its decision to adopt the Harkness method–so much so that the school ordered an exact replication of Exeter’s Harkness tables for its own classrooms.

The Harkness method draws a clear inspiration from the Greek philosopher Socrates, who was a well-known advocate of the idea that critical thinking skills come with healthy dialogue and debate. Harkness discussions attempt to connect many of these qualities to the classroom, through an approach where teachers take a step back and allow students to delve into concepts through discussion amongst themselves.

According to The Friends of Harkness, Edward Harkness was known to be a shy and quiet student through his college years, which was one factor of his interest for discussion-based learning. Harkness was intimidated by the more traditional learning styles he grew up with in the late 1800s, and developed the learning method as a way to better engage students.

The noticeable lack of the physical Harkness table in both remote and hybrid classes has reaffirmed the significant value it provides to a discussion-based class. Teachers have noticed the lack of the small social cues which occur around the table, such as eye contact or body language.  The absence of these elements, some faculty say, is more impactful than it may seem.

Senior Mariano Russo agreed. “I think there’s more building on others’ ideas when you’re at the Harkness table. You can read social cues, so you know when to stop, or move on, or contribute.”

According to Upper School history teacher Eric Shapiro, it becomes particularly hard to maintain the Harkness ethos of discussion between all students in the hybrid learning model, where students are sitting in rows rather than at an oval table.

“I don’t love the idea of me being in front, like I’m the commander in charge. It’s the aspect of ‘we’re all in this together’ [which is lost with remote/hybrid Harkness],” he said.

Apostol referenced this idea of the equity of space around the table in her report as well.

“At the oval table, students face each other, and there is no defined leader: teachers and students have a semblance of parity,” she wrote.

Yet, even with the wide array of challenges which have faced Harkness classrooms thus far, Emery was quick to praise how students have responded.

“I think students have really adapted beautifully,” she said. “I think that the school is really at an advantage in the sense that a lot of our classes are not just built on learning, but are also about communication and relationships, and fostering a community.”

Transitioning from remote to in-person

Teachers across the country were thrown into the deep end when the pandemic first hit—forced to adapt swiftly to remote circumstances. However, faculty at Masters faced an extra speed bump as the new school year started: they had to transition their courses into a hybrid model of teaching when Masters returned to campus on Oct. 5.

Particularly in the humanities courses which typically consist of Harkness discussions, the hybrid model presented an entirely new set of challenges. With some students checking in to class on Zoom, and others in the classroom, leading a Harkness discussion for both remote and in-person students has proven to be a difficult task.

Upper School English teacher Miguel Segovia said, “In the hybrid model, I can’t even attend to all of the things that would have been visible to me at the table, because we’re so spread out. I can barely hear the people in the back so I have to move, and because we’re all wearing masks it’s impossible to read facial expressions.”

Segovia has continued with full-length Harkness discussions in most of his classes, but given the combination of in-person and remote students simultaneously participating, he conceded that the hybrid setting can be overwhelming.

“[Hybrid Harkness discussions] are really hard to manage, because I’m not a 360° camera,” he added.

In one attempt to remedy these issues, Segovia had students arrange their socially-distanced desks to face each other in order to maintain some sort of similarity to a Harkness table for discussions.

Yet, even with the difficulties of teaching Harkness classes in an online and hybrid setting, faculty have been praised for their best efforts to recreate a pre-pandemic discussion environment.

Staci Marlowe, who has three children at Masters (Maddie ‘23, Lauren ‘23 and Taylor ‘25), said, “I think that teachers have risen to the occasion and to the challenge. We’re all treading on uncharted waters.”

For new students at Masters–the majority of whom are in ninth-grade–the adaptation to Harkness on a virtual and remote platform has been especially challenging.

The beginning of the school year is often a time for teachers to introduce students to the Harkness method. Without the ability to learn from a typical Harkness class, students do not have the same exposure to the social cues, body language, or flow of discussion which subtly affect a Harkness discussion.

According to Emery, who teaches ninth-grade English, this presents a unique problem. “Some [new students] do not come from schools that have discussion-based learning, so we’re trying to teach that in non-optimal situations. It’s like trying to teach about gravity in zero-gravity,” she said.

The unusual circumstances have also resulted in a lack of the classroom culture which is formed in a Harkness classroom, specifically for new students who are not used to the atmosphere of a discussion-based class the way an experienced Masters student is.

As a result, teachers have had to get creative. Some, like ninth-grade history teacher Jason Hult, have employed the use of more student-centered informal class time, as a means of providing a substitute for the informal social interaction which occurs around the Harkness table in class.

Hult said he has intentionally sought to build in moments in his classes which allow students the chance to speak to one another and interact.

In one class, he asked his students to share a mundane task they are especially adept at, as a “check-in question” before the class dove into the content for that day.

Freshman Alexi Galantic noted that while he has been exposed to Harkness in the Middle School, it has been difficult for many of his classmates to become acquainted with the Harkness system in a remote and hybrid setting.

“It’s not giving [new students] a fair chance at Harkness,” he said.

Amidst the countless number of inconveniences of the remote/hybrid Harkness system, at least one positive effect has clearly emerged. As a result of the increase in asynchronous work given the virtual circumstances, the technological playing field among faculty has been levelled, possibly to an extent which would have been impossible without the circumstances presented by the pandemic.

Collaborative online tools, like the programs “Jamboard,” “Peardeck,” and “Padlet” have surfaced as new ways to engage students through online sharing. These programs were unbeknownst to most teachers before the school shut down last March, but with remote learning becoming the new normal, they have become familiar sites to many members of faculty.

In addition, teachers have learned to use features of Zoom, such as breakout rooms and the chat, as a way to better organize a virtual classroom.

Shapiro said, “I’m definitely more confident [with technology], and more comfortable now mixing video with slides, and things like that. It definitely is a type of silver lining.”

Nathaniel Hawkins, the chair of the English department at Exeter, agreed that the new exposure to technology was at least one positive take away from a difficult transition.

“One positive development to come out of this mess is the raising of the technology floor. The dinosaurs have been forced to raise their game, and the proficient have become mentors for them. It’s a refreshing change, a reversal of some of the seniority based ‘mentorship’,” Hawkins said.

Exeter has been conducting some Harkness discussions over a nearly entirely remote slate of courses, but according to Hawkins, there has been a significant increase in asynchronous work, which has led to its new recognition of certain virtual tools.