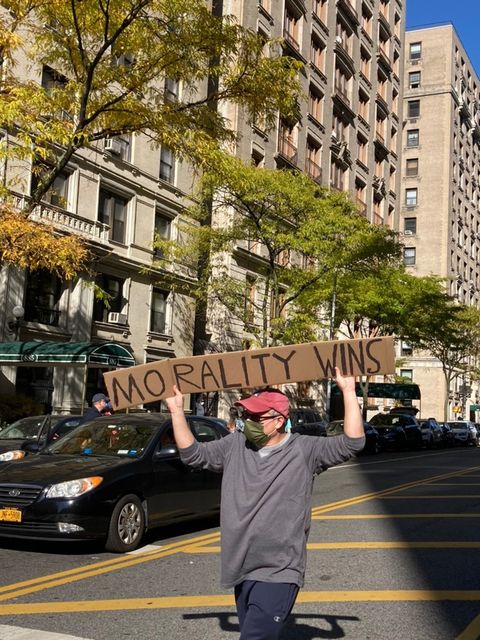 A man celebrates the media's projection of Biden as the winner of the presidential election. He was one of many waving signs on the streets of the Upper West Side. Some students, like Iris Pelli-Walbert, took to the streets to express their happiness with the results of the election.

Senior Iris Pelli-Walbert was finishing her statistics homework when she heard the banging of pots and pans outside of her Upper West Side apartment building window. She peered out the window on an unusually warm and sunny day for November, and was initially more confused than anything. But when she received an all-caps text from her mother, she put the pieces together: Joe Biden had been announced as the projected winner of the election. Elated from the news and relieved from the week of stress before, Pelli-Walbert walked outside and joined in on the celebration. “It was the largest sense of community I have felt in a long, long time,” Pelli-Walbert said.

Many students sensed a similar positive reaction across the student body. In these past few days since the projection, junior Alana Gould has not witnessed any visible dissatisfaction with the results on campus.

She said, “If there are Trump supporters on campus, they’re not showing their disappointment in a way that I would if Biden lost.”

Most students were hoping for a Biden win. The causes varied from student to student: for Gould, it was LGBTQ+ rights. For Junior Rowan Walter, our changing climate was on his mind. For sophomore Noah Kassel-Young, the coronavirus was the defining issue of this election. He supported Biden because he believed that he would handle the virus better than the current administration.

“My dad’s a doctor, so I saw how much Covid-19 drained him. Lockdown was especially rough on all of us,” he said. “Joe Biden has already appointed a committee for the virus, and that’s some leadership for Covid-19 that we haven’t had so far.”

Though many of these students were ultimately enthusiastic after finding out the results of the election, they were discontented with how election week went as a whole. Freshman Xavier Rolston noticed a common struggle that the student body faced last week.

He said, “Last week, I know a lot of people were staying up late to watch the results come in, so they were sleep deprived on top of being anxious.”

On election night, Next Generation Politics President Caio Lanes said that got just two hours of sleep. Gould said that she certainly felt nervous throughout the week, to the point that it was affecting her school work.

She said, “I checked the election results every five minutes for those few days, to the point that my mom told me that she was going to take my phone away because I was stressing myself out too much.” She added, “I had to email multiple teachers to say that I was unable to open my notebooks and do my homework.”

Now, some students are noticing a change in energy on campus as the presidential election comes to a close. Pelli-Walbert said that she noticed a sharp decrease in student stress just in these past few days. Junior Francesca Gossett said more generally, “My faith in humanity has been restored a little bit.”

For others, the anxiety of last week is just as strong as this one, as the next few months bring political instability and uncertainty. Kassel-Young said that he interprets President Trump’s refusal to concede, which Junior Ryan Israel referred to as “childish but expected,” as a foreshadowing of more troubles ahead.

Kassel-Young said, “It’s a little worrying right now that Donald Trump and other Republicans are not accepting the results of the election . . . With a country like ours, you do really want to see the system functioning properly, and right now that seems like it’s in limbo.”