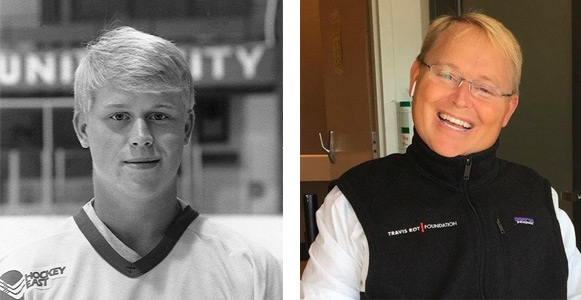 Travis Roy (left) as a young hockey player at Boston University. Roy's injury occurred 11 seconds into his college hockey career and caused his paralyzation. Roy (right) living a happy and positive live after his injury.

A high school freshman sat down in his bedroom with a pen in his hand and a thought in his mind. He’d always played hockey, and as an athlete, he’d always been told the importance of setting goals. First, it was about how many goals he could score his freshman year, then his sophomore, and the same for his junior and senior year. But he wasn’t the kind of kid who would be satisfied with only a few short-term goals. He believed in his mind, and his heart, that he could achieve whatever goal he set for himself. Goal number one was to play NCAA Division I College Hockey. Goal number two was to make it to the National Hockey League (NHL). And last but not least, his final goal was to secure a spot on the U.S. Men’s Olympic Hockey team, the pinnacle of athletic achievement. But as that fresh-faced kid from Augusta, Maine, four years removed from his goal-setting occasion, laced up his skates for his very first game at Boston University, little did he know that the moment he had been longing for for years would turn into the worst day of his life. October 20, 1995, would not be his first step towards greatness, but instead his last step ever. That is Travis Roy’s story.

Travis Roy was born in Augusta, Maine. His dad managed the local ice rink and his mom was his number one fan. At the age of 20 months, his father bought him his very first set of skates, marking the date his lifelong passion was born. Committed to sports from an early age, Roy became a phenom in the ice hockey world and accepted a scholarship to play for the Boston University (BU) Terriers. As a young rising star, he was euphoric about the opportunity to play for the multi-time NCAA Division I National Champion Terriers.

“I woke up that morning thinking it was the best day of my life,” Roy recalled. His very first chance to play in a college game was meant to be the day that showcased Roy’s dedication, care, and hard-work towards his craft. And two minutes into the game, after the Terriers had scored a quick goal, Roy, sitting on the bench, felt someone tap his shoulder.

“It was the tap on the back on my shoulder that I had been waiting my whole life for,” he said. Roy was getting to fulfill his dream. All of the lonely hours spent on the ice rink on Friday and Saturday nights, practicing his shooting and skating, had all led up to this moment. But instead of marking the beginning of success, it marked the end of a dream.

Eleven seconds into his very first shift, Roy lost his balance and crashed head-first into the boards.

“I remember thinking “no big deal….I’ll just get back up on my hands and my knees, [I’ll] get back in the game,”” he said.

“My brain was sending messages but my body wasn’t responding. And that’s when I knew I was in big trouble,” Roy continued.

When Roy had crashed into the boards, he had fractured his fourth and fifth cervical vertebrae, leaving him as paralyzed quadriplegic.

The kid who first stepped onto an ice rink before he turned two. The kid who had put in endless amounts of time into practicing and training. The kid who had worked for 18 years of his life for one moment. That was the kid whose lifelong dream was crushed right before his eyes.

As an athlete and a person, Roy had faced challenges throughout his life. He had a mild form of dyslexia, which hampered him in academic success. He worked arduously, and was able to achieve a B average and cracked a score of 1000 on the SAT on his fifth attempt. But becoming paralyzed was a setback like no other. It would forever alter the course of Roy’s life. However Roy was not the type to give up when faced with a challenge. For him, it was not about being hit with a blow that would define him, but how he would overcome that adversity.

“To me, it all comes back to having pride…. pride is knowing that you did try your hardest, that you gave it your all,” Roy said. “But more than anything, it’s knowing that you didn’t let yourself down, because only you know whether you put in the effort that was required,” he said.

Roy did not throw in the towel. Instead, he worked hard and eventually returned to BU to obtain his degree before founding the Travis Roy Foundation, which has provided grants for numerous victims of spinal cord injuries and raised over 4.6 million dollars towards research for a cure.

Masters alumnus August Peterson ‘20 heard Roy’s story through his former hockey coach, Todd Johnson. Johnson played for the Terriers in the late 70s and early 80s and used to talk about Roy before games. Peterson was inspired by his story and spoke about his resonance with Roy’s message.

“No matter how bad it may seem or how bad it is in the moment, there’s always light at the end of the tunnel,” Peterson said.

“Just because you have a setback or something, doesn’t mean it’s over,” he continued.

After hearing his story, Peterson sought the possibility to have Roy visit campus. In turn, he worked with Head of Upper School Peter Newcomb in reaching out to Roy’s management team in order to set up a time for him to visit. Newcomb, who moved to Maine in high school and knew of Roy’s story, agreed that having him speak to the community would bring positivity. After reaching out and setting up a date and time, Roy ultimately addressed the school last December.

Not only was Roy’s point about overcoming challenges inspiring to Newcomb, but creating solid goals was another component of his speech that stuck with him.

“To me, it was also about setting goals – setting concrete goals – along the way to reach the end of the tunnel when you’re faced with a challenge,” he said.

Newcomb also referenced his resonance with Roy’s idea of finding joy in the little moments.

“The thing that I can appreciate the most is definitely his confidence and his ability to speak about such a traumatic situation,” Aduba said.

“Personally, I would never be able to talk about that….it’s just crazy how he’s able to do that,” he continued.

On Oct. 29, Travis Roy sadly passed away at the age of 45 from complications of a procedure induced by his quadriplegic paralysis.

But though he may no longer be here in person, Travis Roy Foundation Director Andrew Brownsword believes it’s important his message continues to spread and his legacy lives on. As for the future of the foundation, Brownsword addressed their plans.

“Sadly, sadly, sadly he is no longer with us, but in support of his mission, he would want us to continue on,” Brownsword said. “For the next year, couple of years, there’s going to be almost no change to what we’re doing….nothing’s going to change except for the fact that we sadly don’t have our friend Travis with us.”

In a year full of challenges––the Covid-19 pandemic, the fight for racial equality, an emotional election, and more–– Roy will be remembered for his speech and his character. He gave 100 percent effort during the 25 years and nine days – the time from his accident to his death – and inspired thousands, if not millions, of people in the process. Every single person at some point in their lives will face a challenge. But as Roy preached, it is not about what that challenge is or where it comes from that is most important.

“That’s the challenge that chose me,” Roy said when speaking about his injury. “There are times when we choose our challenges, we set our goals, and there are other times where our challenges simply choose us. It’s what we do in the face of those challenges that defines who we are.”