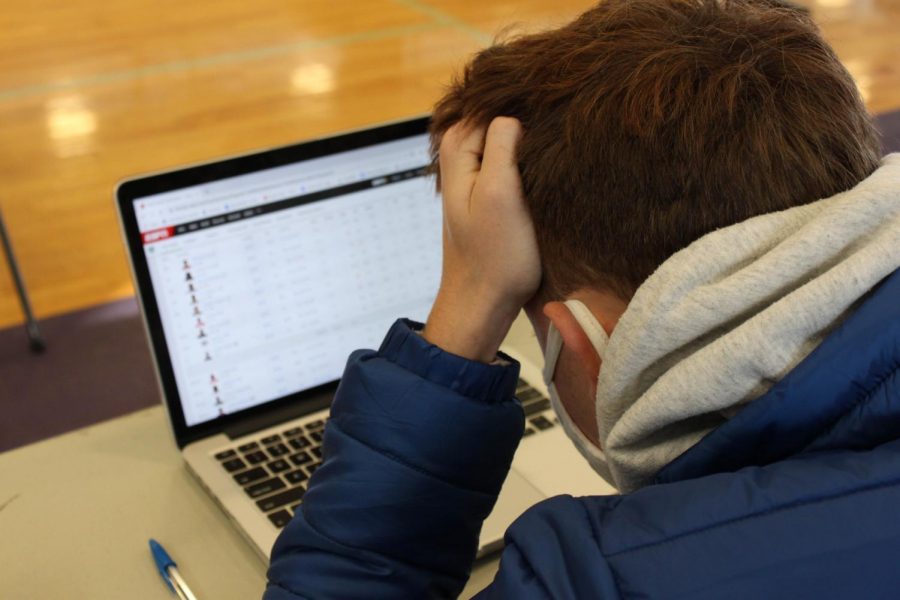 Denis Sadrijaj '22 sets his line up for his upcoming fantasy football match-up.

Junior Kyle Benson checked his Fantasy Football team in week four of the NFL season counting on his star player, Derrick Henry of the Tennessee Titans, to score big. That week, 23 players on the Titans tested positive for COVID-19 and the Titans’ game was postponed indefinitely. Benson was forced to find a last minute replacement, risking his team’s success: a common occurrence for fantasy football participants across the nation.

A fantasy football team consists of a group of different NFL players from a variety of teams. Each week, fantasy participants predict which athletes will perform well in their actual games and “start” or “bench” players accordingly. A fantasy team’s success can be made up of various different factors: the fantasy player’s strategy, injuries of the athletes, and the overall performance of athletes, leaving a lot up to chance. This season, COVID-19 has added another layer of complexity.

As of week nine of the NFL regular season, upwards of 170 NFL players have been placed on the COVID IR (injured reserve) list. As a result, many NFL teams have had to play without a full roster, and some have been forced to shut down their facilities. Football inevitably leads to injuries due to the physicality of the sport, but COVID-19 has increased the amount of sidelined athletes. Like Benson, fantasy football team managers are often left to set a lineup with whatever healthy players they can scrap together each week.

Sophomore Charlie Cooper, who also owns a fantasy team, said, “It just adds a whole other level of unpredictability and frustration.”

Cooper explained that a strategy centered around the virus might appear far-fetched, but in a season where some teams are able to practice and others are not, those inequities must be taken into account.

“If a team isn’t practicing or if their facility is shut down for a long time, you just have to start thinking about the effects” he said.

This season’s complexities have forced fantasy team managers to keep constant tabs on how various teams are faring. Bhavin Patel, director of technology and a participant in one of the Masters Faculty leagues, said, “If a[n] [NFL] team’s defense is decimated, you’re going to be more likely to start a player that’s going to be playing against them. That’s definitely part of the strategy.”

This season has also seen many of the top-drafted players fall victim to injury. Patel emphasized that there is a direct correlation between the increased number of injuries and the pandemic.

“There’s no training camp, very limited practices, and then [athletes] are trying to play an extremely physical sport like football on a lack of preparedness,” he said.

Eric Shear, owner of 5 fantasy teams, expressed the dangers that come along with playing in such a dangerous time. “[Athletes] are taking out a ton of risk here. We don’t know what the long term effects will be, but I wouldn’t be shocked if [COVID related effects] stick with them for the rest of their lives.”

Beyond the physical players, stadiums, many of which are completely desolate, have been forced to strictly regulate the number of fans on game day. Cooper explained that this change in environment has also had an effect on performance this season.

“It’s a tough topic, because fans are so important to the game, but they are also a safety hazard,” Cooper said.

“They play an enormous part in team motivation,” he continued.

Despite all of the extraneous risks and factors, Shear said he finds excitement and fun in the randomness. He said, “I’m the prime age to be a fantasy football player. I’m not bragging, but I’m pretty good.”