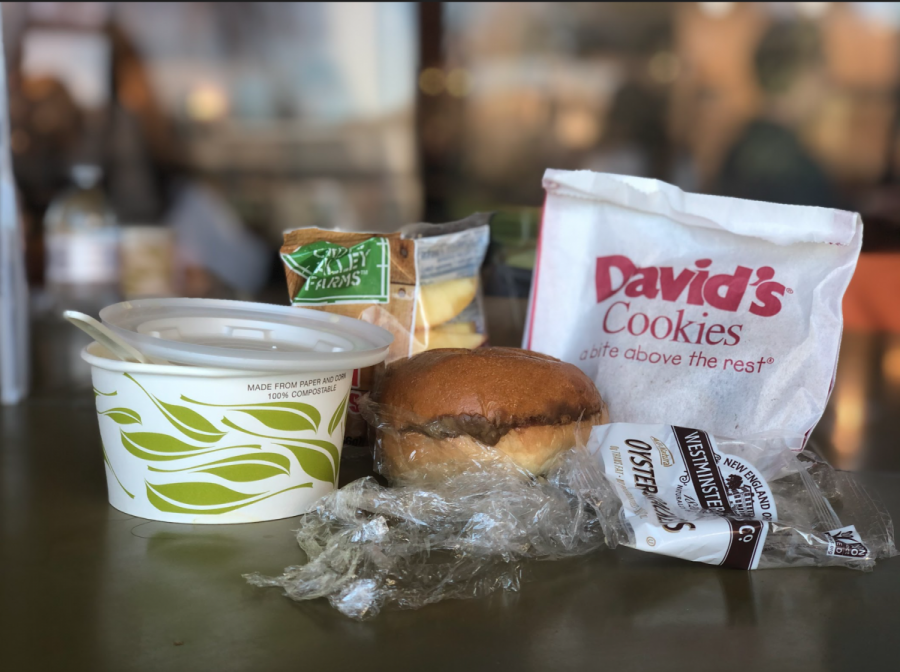 Lunches at Masters have increased plastic usage due to safety precautions.

From Meatless Mondays to composting bins in the dining hall, Masters’ sustainability initiative EFFECT has made it simple for students to partake in daily tasks that increase their own environmental sustainability as well as the community’s, but COVID-19 has set back many of their efforts.

In past years,EFFECT has been instrumental in leading the school to becoming more environmentally mindful: consistently organizing numbers of environmental activities and drives for students and faculty to participate in. However, many of the new COVID-19 safety measures have caused the sustainability initiative to be slowed down. Lunches are now individually packaged in plastic wrap, plexiglass dividers have been placed on every dining room table and community composting has been temporarily stopped, according to EFFECT Faculty Advisor Courtney White. With all this and more, EFFECT continues to plan new safe and sustainable activities and maintain annual traditions.

Meals at the dining hall pre-pandemic were in the same format each day: students would line up after class to get food from a communal tray, sharing one tong to get the food on their plates and packing tables. When this way of handling food and eating became unsafe, Masters switched to pre-packaged and individually wrapped lunches. This in turn increased plastic usage, with new dining hall lunch items being mostly single-use and non-recyclable. EFFECT’s Head of Community Outreach sophomore Tyler Hack said, “We [EFFECT] are discussing safe ways to become more sustainable, and are researching new alternatives to combat the single-use items in the dining hall.”

Hoping to collaborate with Masters dining hall service Brock, EFFECT is looking to figure out a way to fulfill the student interest in sustainability while maintaining safety on campus.

Student participation is also a key part of EFFECT, with the majority of initiatives taken relied heavily on student involvement, like last year’s Earth Week celebration or encouraging students to cook environmentally friendly meals. Courtney White, who is remote, said “Last year, we had a lot of students participate in activities like the Climate March, whether they were on campus or in New York City, and it was a big opportunity for our school wide participation,” White said. “This year, participation’s been a challenge as many students are still remote, nationally and internationally. We try and encourage participation from home, but it’s been difficult with people being so fatigued from [online] school.”

The pandemic has also driven EFFECT to come up with creative and safe ways to be sustainable though drives. The first drive of the year was an e-waste collection of any broken/unneeded electronics, to be either properly recycled or donated. Ranging from cell phones to tablets to headphones, students and facility were encouraged to bring any form of E-waste they had. Senior Anastasiia Gorobets, a Co-Chair of EFFECT, reflected on the drive, “I think it went great, because so many people don’t go to [in person] school, so based on the amount of people who actually go to school, I think we did really well.” EFFECT collected an estimated 50 pounds of e-waste.

With EFFECT pandemic successes also come challenges, primarily with safely upholding traditions while keeping them sustainable. EFFECT launched a bake sale in September as a fundraiser, as they have in previous years. However, this year, they were informed that only pre-packaged goods were allowed to be sold. Gorobets said, “It’s difficult, because when we are fundraising for one environmental issue, we’re harming it in another way by selling bags of chips as opposed to baked cupcakes.”

In the spirit of keeping traditions, EFFECT has planned their annual Fall Festival for the week of Nov. 16 – Nov. 20. Activities such as forest cleanups, documentary screenings, geocaching and more were included.