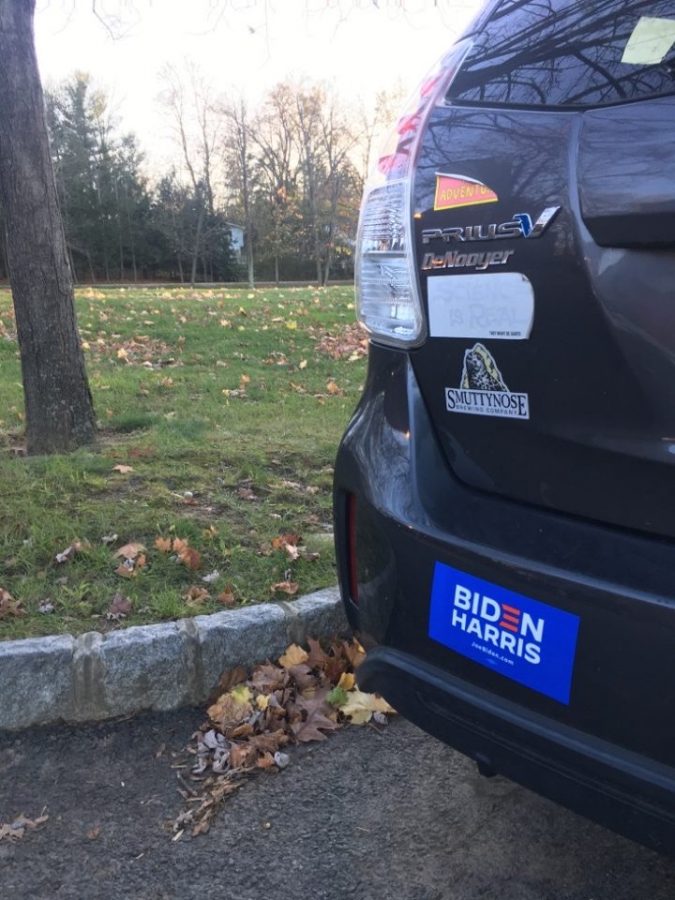 A car is decked out with a Biden-Harris sticker. Many others showed their support with similar merchandise.

Former Vice President Joe Biden’s win of the presidency has given Democrats hope for the future of America. Although President Donald Trump is currently unwilling to concede the position without conflict, it is at least going to be easier for Democrats when he eventually does leave office. This success can be attributed, in part, to lessons learned by Democrats from former First Lady Hillary Clinton’s failed election campaign in 2016; particularly, the importance of social movements to “get out and vote”, as that was a major point of weakness that led to Trump’s victory. Those lessons are still important after the 2020 presidential election- there still needs to be effort put in to maintain the momentum towards having elections true to the desires of the people. But, this work cannot only be delegated to those most harmed by the consequences of inaction, as lack of turnout from less involved voters was one of many factors resulting in Trump’s election.

During the 2016 election, there were complaints of voter suppression, mostly among  towns and cities with a high percentage of black and low-income voters. These complaints detailed several methods, including the closure of close to 900 polling locations, voting hours being limited to times in which many people were working, and voter registration being made much more difficult.

This suppression of voting in disenfranchised communities, although previously protected against in the southern states that most of these complaints came from, became legal in 2013 due to the outcome of Shelby County v Holder. The conclusion of this Supreme Court case was that Section 4b of the Voting Rights Act, which required that any changes relating to voting made in a state have the express approval of the federal government, was unconstitutional. 25 states have since instituted some form of voting restriction at this point.

Georgia, which was one of several states to cut the early voting period in half after the outcome of Shelby County v Holder, took to organizing Black votes with aplomb. Stacey Abrams and other Black community organizers managed to flip Georgia, giving Joe Biden a state that no Democrat has had in three decades. This was done only by 20,000 votes however, and while the work of Abrams was most definitely not a failure, as Georgia likely never would have flipped without it, all of that work might be undone in the future by unenthusiastic voters, as happened to Clinton in 2016.

Before election day in 2016, early polls and projections claimed that Clinton would clinch the presidency. Although the margin by which she was projected to win varied from source to source, it was agreed upon by a majority of national polls that she would be elected president. The less enthusiastic of Clinton’s supporters expected her to win, even without their votes. But then, those polls proved to be inaccurate, as she eventually lost to President Trump.

Many sources after this discredited the importance of early polls, claiming that they were ultimately an indeterminate signal of how an election will turn out. This is yet another way in which Democrats attempted to protect against lack of voter turnout – by making a common assurance that the race will turn out fine without mass voter turnout irrelevant. The fervor with which Democrats showed up to vote, but the slim margin that Biden won by, shows that they can’t afford to give up any votes.

Democrats can’t do much more to maintain them, however. While they could finance efforts to appeal to the less politically-enthused electorate, it would be hard for a political party to appeal to a group that seems to lack care for politics. What can help, though, is continued support towards grassroots organizations. Deborah Scott, executive director of Georgia Stand-Up, noted the importance of making elections an entertaining and empowering experience for voters. That is something that a political party can’t do, since they can never really talk to the people. But in the end, those voters have to chose to get out and vote, and not leave the next Democratic candidate in the dust. Let’s hope they make the right choice.

For those interested in helping out on a national level, Rock the Vote is an organization dedicated to getting out the vote every year. Donations are welcome on their website, rockthevote.org. Different methods of volunteering can be found on there as well.