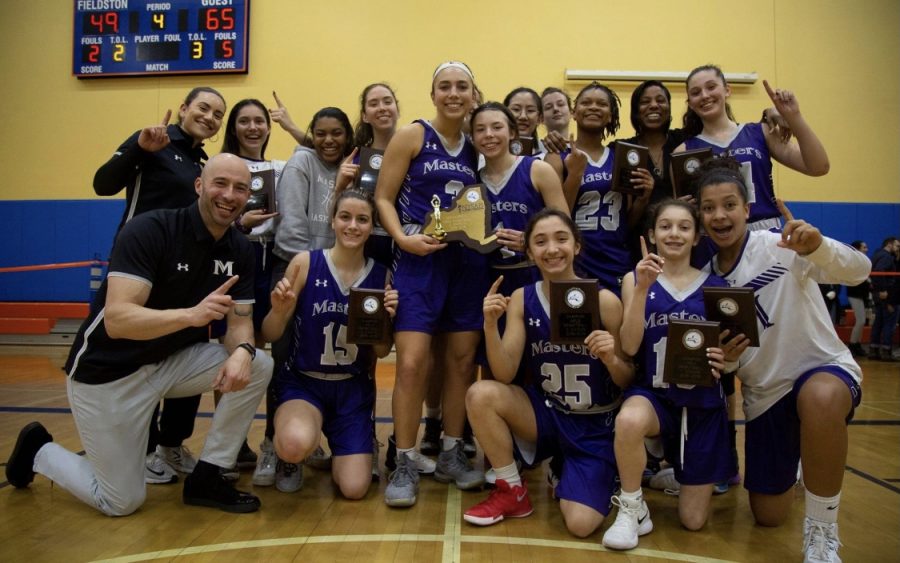 The girls varsity basketball team in 2019 after they won their championship title.

The Girls Varsity Basketball team has played for the NYSAIS Championship Title for the past three years. This year, even a season is in question.

According to an email sent out on Nov. 19 by Athletic Director Logan Condon, the team’s practices will begin in early December, a month after the regular season would typically begin.  The prospect of an interscholastic season remains in question, as there are only a limited number of private schools that will be in session this winter.

Condon said in the email, “Our teams will conduct tactical, technical skill and fitness-based training while building toward intrasquad competitions as we wait for further clarification from the New York State Department of Health and guidance from our Health Advisory Team. ”

As for the winter season games, a majority of it is unclear since the positive test results are rapidly growing every day. The ambiguity of the season has left the team fearful of their opportunity at another championship slipping away for the upcoming season.

In response to the possibility of not having a season, Tatarian said, “I think we will continue to practice at the intense level we are used to despite the possibility of not having games, we hope we at least have practices. Coach Nick [Volchok] is constantly encouraging us to work hard and will help keep up the team’s work ethic, we will still maintain that competitive mindset throughout the winter season.”

For the past two years, the team has consisted of a small group of returning girls who have learned to collaborate and work together to achieve their goals of attending the championship for the past 3 years, Condon is confident the team will continue to practice in this way regardless of having games.

“The girl’s basketball team is an extremely hard-working group of girls who are all very dedicated to their craft, they take every single practice and/or the game just as seriously as the next. That is what I admire about the group. They are all fierce competitors for each other and work very well together as one unit, they challenge each other on the courts,” he said.

Freshmen Panayiota Chrysanthopoulos who is one of two new members for the upcoming season, while reflecting on her first impression of the team said, “last year I got to attend the championship game, they were all coordinated and worked really well together, it was great seeing them play each player was really good and driven, I was really looking forward to playing with them.”

According to Tatarian, the team has been especially motivated in past years by the prospect of a postseason. Now without the NYSAIS Championship Title to chase after, the team is going to be forced to adapt to these new circumstances.

She said, “I know for Allie and I, we want to make our mark this last season that’s motivating us, we do not want this season to pass by, all of us coming together I know we will try to make the most of this season that we can.”

Nick Volchok who has been the girl’s varsity basketball coach for the past few years said, “We were really going into this year aiming for our fourth consecutive attempt at a state championship. We have some really good seniors who I know were very excited about this season as well as a good group of new players. It will be very disappointing for the team and myself if we are not able to showcase this team.”

The team is trying to stay hopeful, but a majority of the players are doubtful of the possibility of a season. Zara Suvanto, the other new player to the team for the 2020 – 2021 season said, “I was really looking forward to improving my own skills and making memories these next four years on this team, last year I was so excited to come to Masters since it is my dream school and then Covid happened.”

Currently, the players are staying dedicated to individual improvement outside of school, although they cannot hold any in-school team practices until Dec 1.

Tatarian said,  “Right now we are trying to focus on individual work such as speed and agility, and getting some shots in a few days a week and things like that, to come back and work together as a unit.”

Chrysanthopoulos added on to say that the players are centralizing their attention to their individual growth as players and are looking forward to adding their own elements into the team.

As Tatarian approaches her last season  She said, “Basketball at Masters is something that has made my experience here so valuable, and the fact that there is a high possibility that this may be taken away from me is extremely saddening. It’s the worst feeling.”